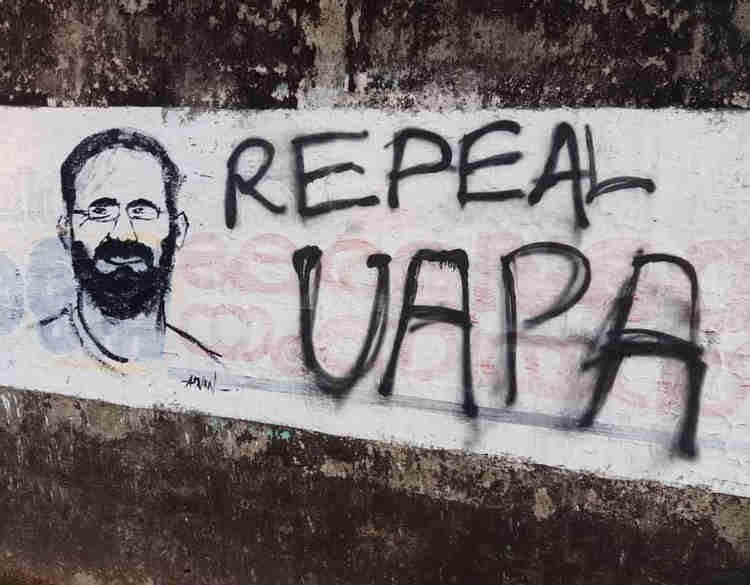 The BJP government is exploiting a terrorism prevention law to intimidate dissenters from lawyers, journalists, priests, poets to Kashmiri civilians

Khurram Parvez was a teenager when his grandfather, a civilian, was gunned down by the Indian army. Growing up in Kashmir in the 1990s, he became wearily familiar with such violence but it was an incident he would never forget.

Over the next three decades, Parvez defended human rights and documented the alleged violence, torture and enforced disappearances of Kashmiris by Indian armed forces. After he lost a leg in a landmine explosion in 2004, he was instrumental in getting rebel groups to agree to a landmine ban.

It was work that won him international accolades. But last month, in the early hours, the 44-year-old was arrested at his home by India’s National Investigation Agency (NIA), the central bureau which investigates terrorism cases, and taken to jail accused of “terror-funding”.Advertisementhttps://56ef141709bf56d2107a010af4bc13ce.safeframe.googlesyndication.com/safeframe/1-0-38/html/container.html

It is the latest case to trigger accusations that dissent is being stifled under the Bharatiya Janata party (BJP), led by the prime minister, Narendra Modi. But under the shadow of Parvez’s arrest, Modi is one of the world leaders taking part in US president Joe Biden’s Summit for Democracy, which began on Thursday. The Indian prime minister is expected to take a “prominent role”, including giving an address about “democracy commitments”.

The law under which Parvez was detained, the Unlawful Activities (Prevention) Act (UAPA), stands accused of being unconstitutional and undemocratic. UAPA, ostensibly a terrorism prevention law, has instead routinely been used by the Modi government to detain those deemed critical of the government, from lawyers and activists to journalists, priests, poets, academics, civil society members, and Kashmiri civilians.

For those held under the law, it is notoriously difficult to be granted bail, meaning those accused can be left in pre-trial detention for years. In one of the most stark cases, Father Stan Swamy, an 84-year-old Jesuit priest with Parkinson’s disease who was detained for allegedly supporting anti-national activity, died in jail this year after being repeatedly refused bail even on health grounds. In another case, a journalist, Siddique Kappan, has been held under the law for more than a year without bail after being arrested while reporting. Last weekend, Parvez was denied bail and sent to Tihar prison in Delhi after 12 days of custody.

Use of the law has risen steeply since 2019 when the government gave authorities the power to designate an individual as a “terrorist”. Last month, when communal violence erupted in the Indian state of Tripura, it was used against lawyers who tried to investigate the attacks, journalists who reported on the destruction of mosques and more than 150 journalists and civilians who tweeted about the incidents.

In November, a case was taken to the supreme court challenging the constitutional validity of the law, pointing out that only 2% of UAPA arrests end in conviction, and arguing that “prosecution under the UAPA is either initiated in bad faith, or the quality of the evidence is not sufficient”.

“The entire problem with UAPA is the vague definition of unlawful activity,” said Salih Pirzada, a Kashmir-based lawyer. “Anything you do by your actions, words, spoken or otherwise – or even if you only intend or think of doing something – the authorities can bring that under the definition of Unlawful Activities.”

The deployment of UAPA has been particularly apparent in Kashmir, a region that has been disputed between India and Pakistan since Indian independence. Kashmir has been home to a long-running violent insurgency fighting Indian rule and as a result has become the world’s most heavily militarised zone.

But in August 2019, the BJP government revoked the autonomy that Kashmir previously had for 70 years, and brought it fully under control of the central government. A severe military crackdown on the region followed, which has sharply escalated in recent months.

A father who demanded the body of his son who was killed by Indian forces, the players of a cricket match which was organised in memory of a slain militant, and Kashmiris who supported Pakistan in an India-Pakistan cricket match have all had police cases filed against them under UAPA.

It also led to calls for UAPA to be amended and brought in line with international human rights law. Human Rights Watch said authorities were “increasingly using the counter-terrorism law against activists, journalists, peaceful protesters and critics to silence dissent”.

The UN Office of the High Commissioner (OHCHR) said the law raised “serious concerns relating to the right of presumption of innocence along with other due process and fair trial rights”.

India’s foreign ministry spokesperson, Arindam Bagchi, accused the OHCHR of making “baseless and unfounded allegations” and stating that Parvez’s arrest “was done entirely as per provisions of law”.Advertisement

“National security legislations, like the Unlawful Activities (Prevention) Act, 1967 (UAPA), were enacted by the parliament to protect the sovereignty of India and ensure security of its citizens,” Bagchi said.

It is not the first time Parvez has been targeted. His organisation, Jammu Kashmir Coalition of Civil Society (JKCCS), has investigated systematic torture, allegations of rape of civilians by Indian officers, staged gunfights and mass graves, and fought legal battles for victims in Kashmir, making him a thorn in the side of the Indian forces for decades, and in 2016 he was arrested and held for 76 days, until a judge declared his detention illegal and arbitrary.

Parvez Imroz, a colleague of Khurram Parvez at JKCCS, said the aim of the arrest was to intimidate. Imroz is now the only member left running the organisation. Their office was first raided by authorities in October 2020, which Imroz believes was the first attempt to harass them.

“The purpose was to stop us from doing our work,” he said. “No volunteers are coming here to work due to fear. We used to receive the victims here. But everyone is afraid.”