NDA revives a 1916 pact for dams on the Ganga 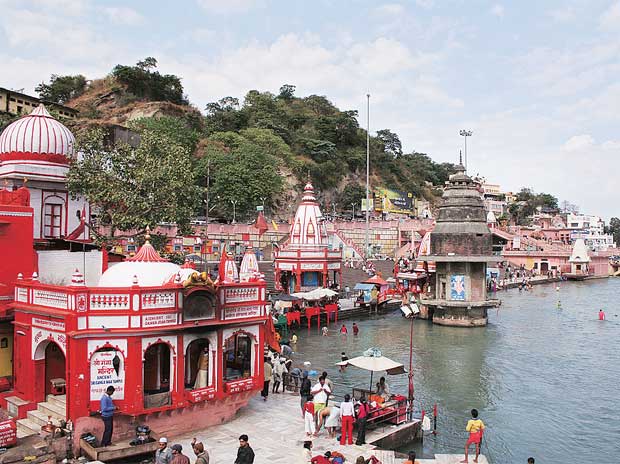 A view of the Ganga in Haridwar

Amidst the argument between Union ministers Uma Bharti and Prakash Javadekar over the future of dams in the upper Ganga basin, one question begs attention: how and when did an antiquated document dating back to 1916 become the basis on which the National Democratic Alliance is deciding the fate of the people in Uttarakhand, its rivers and hydroelectric projects in the hill state?

The 1916 document is an agreement on how much water should flow through the weirs, dams and canals and the main stem of the Ganga river specifically across the ghats of Haridwar so that the Hindus taking a dip in the river continue to believe in its ‘purity’. It was signed between the then British government, some kings of the era, Madan Mohan Malviya and others speaking on behalf of the ‘Hindus’.

The agreement said that 1,000 cusecs of water would flow unfettered across the ghats of the city at the foothills at all times. At the time, no hydropower projects existed in what is now Uttarakhand.

The document has been introduced as the basis for NDA’s policy for river flow in the Ganga basin in a case before the Supreme Court. But the government has reflected it ingenuously to say that following the ‘spirit’ of the agreement, it is now the government’s stated policy to allow unfettered flow of 1,000 cusecs specifically in three tributaries of the Ganga (Alaknanda, Bhagirathi and Mandakini) and the main stem.

An expert panel that the government formed and now depends on to state its case before the Supreme Court has contradicted the government in its report on what the 1916 agreement really mandates. This report too has been put before the court.

Bone of contention
When and how did the government decide that 1,000 cusecs of water in three tributaries of the Ganga, besides in the main stem, are adequate and that other tributaries should not even be discussed?

Bharti, the water resources minister, has said the joint understanding between her and Javdekar, the environment minister, was that these three main tributaries would have no more dams and their waters would flow freely. According to her, all other lesser tributaries were to have the minimum 1,000 cusec limit.

It is not known on what scientific basis this understanding had developed between the concerned ministers.

The environment ministry did not respond to specific queries about how the 1916 report became the basis for government policy or what scientific analysis was conducted to decide that 1,000 cusecs of water flowing at Haridwar – as decided in 1916 – would ensure adequate environmental flows in the Ganga or the safety of the people in the hills when dams are built based on this agreement.

She noted that one part of the affidavit said the waters in three tributaries would flow unrestricted and then the very next paragraph put a limit on it.

Seeking answers
The original case arose when the Supreme Court, of its own volition, asked the government whether the dams in Uttarakhand had played a role in the tragedy of 2013 when thousands were killed in the flash floods in the Kedarnath valley. It asked an expert body to provide a report.

While asking the question, the court ordered, “We direct the environment ministry as well as the state of Uttarakhand not to grant any further environmental clearance or forest clearance for any hydroelectric power project in the state, until further orders.”

The expert body report said the dams had played a role in exacerbating the disaster. It asked for immediate ban on 24 projects in the pipeline, a perpetual ban on projects above the snowline and a comprehensive review of all the other projects before they were given a nod.

Since then the focus of both the court case and the policy of the government has changed. The court’s focus has shifted to six particular hydroelectric projects and whether the government wants to clear these or not.

The critical cumulative assessments, comprehensive impact and safety studies as well as a scientific analysis of how much water is required in all the tributaries of the Ganga basin have been put on the back burner.

Reports that objected to specific projects the court has asked to look at separately have been over-ruled, and a new one was commissioned to see how these projects can be cleared with changes.

This committee was informed in its terms of reference that it should consider the “environmental-flow stipulation on the approved principle of constant unfettered flow of minimum 1,000 cusecs in all seasons.”

It considered and dismissed it in two paragraphs saying the original 1916 agreement only refers to such water flow levels at Haridwar. The committee cleared five out of the six projects the court was focused on. This report too has been submitted to the court.

There are more than 60 other small and large dams already in the pipeline after this at various stages of development in Uttarakhand.

Wide impact
Environmental flows and the dams on the upper Ganga basin decide not just the safety of the people of Uttarakhand, the ecology of the hills ?and the country’s hydroelectric power policy ?but also life in the entire riparian zone in Uttar Pradesh and Bihar. The NDA government’s desire to clean up the Ganga too depends on the flow of water in the river – how much sewage it can take without turning into a sewage canal naturally depends on how much fresh water it has to begin with.

As of now, life of millions in the hills and the Gangetic plains has been left dependent on an ambiguous reading by the government of an agreement signed in 1916 that was merely meant to secure the flow of river at Haridwar ghats for religious bathing – that too 100 years ago.

Now all eyes are set on the Supreme Court. Will it continue to give primacy to the future of select six dams and its developers or be able to make the government answer the larger questions that were asked by the Supreme Court to begin with?

#India- ‘We were used as human shields in Latehar against Maoists’ #WTFnews
Behind the Curve: India’s Failing Response to COVID-19
India -Protecting Health Workers Is Essential - But Govt's Move Is Faulty
Online #censorship: How government should approach regulation of speech