How Baba Ramdev, and a Proxy Hindutva Agenda, Have Entered IIT Delhi 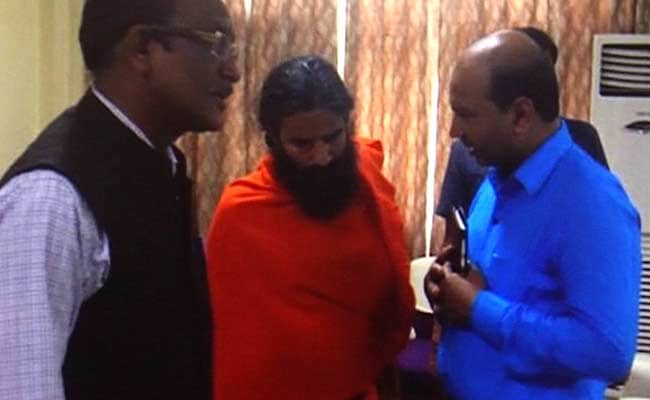 The otherwise peaceful IIT Delhi campus has been in the news for the past several months over the exit of its Director, R K Shevgaonkar, over run-ins with the new government.

Now, there is a fresh twist to the allegations of political interference on its campus.

This has to do with the Unnat Bharat Yojana, a HRD Ministry scheme anchored by IIT Delhi which, according to its website claims to leverage the technical knowhow of institutions like IITs to help develop rural India.

But minutes of an initial meeting of Unnat Bharat held in January this year at IIT Delhi finds that the star guest was yoga guru Baba Ramdev.

Baba Ramdev, according to the minutes, was welcomed by Professor Shevgaonkar. Professor VK Vijay head of IIT Delhi’s Centre for Rural Development and Technology claims Unnat Bharat was his brainchild, along with another IIT Professor Rajendra Prasad. He defended the choice of guest list.

He said the Baba Ramdev had come simply to understand what can be done to help rural India.

But given the nature of the gathering – the audience comprised, amongst others, of members of the RSS’s tribal wing the Vanvasi Kalyan Ashram – the focus was less on exchange of innovative technology, and more on pet themes of Sangh Parivar, like the Indian cow.

In his comments, Ramdev said the IITs must study the genetic code of cows and bulls.

Startlingly, the minutes record that high ranking IIT officials present, like the Chairman of IIT’s Board of Governors, Dr Vijay Bhatkar, also stuck to the same theme.

“Cow should be the instrument in finding all the solutions,” said Dr Bhatkar at the meeting, adding that “cow based agriculture can bring revolution and its foundation could be Gaushala.”

Though billed as an informal meeting, it was decided that the IIT Unnat Bharat group would partner professors with organisations which were either affiliated to the Sangh Parivar, or were quasi-religious: Professor P M V Subbarao with the RSS’s Vanvasi Kalyan Ashram, Professor V K Vijay with Baba Ramdev’s Patanjali Pith and Dr Vijay Bhatkar with the religious sect Gayatri Pariwar.

Further, several of the names of the collaborative agencies proposed for the IITs to work with followed the same bent: a Swami Sampoornanand, a Swami Muktanand, a Swami Rajdendra Das, and a Swami Vishudhanand. When asked what these individuals and organisations have to do with the area of rural development, or technology inputs, Professor Vijay said “these (organisations) are having their people connect, only we are looking there, if they are connected with the people and want to do something for rural technologies, assertive interventions, then only we will be considering.”

The partnership has a monetary dimension. Each of the IITs are meant to fund Unnat Bharat with Rs. 20 lakh from their corpus. Will that money now flow to these Hindutva outfits and religious groups?

Officials in the HRD Ministry were unavailable for comment.

Sources close to Professor Shevgaonkar told NDTV that he was deeply uncomfortable after this conference, telling the organisers he does not understand what Unnat Bharat is.

He asked to be formally not to be part of the Unnat Bharat steering committee.

If the minutes of this early meeting are indicative, then Unnat Bharat seems far removed from the scientific engagement in the field for rural development that it purports to be, more as a proxy for backing, perhaps even funding of Hindutva organisations and agendas. There is the larger question of what it means to locate such an outfit in  a premier science and research institution like IIT.

Professor Jagdeep Chokkhar, former IIT-ian and Founder, Association of Democratic Reforms said “it is absolutely strange that a particular type of individuals or organizations are associated or made the focus of a task assigned to an IIT of all places.”

Govt keeping eye on madrasas with foreign teachers: Rajnath Singh
I am gay. I am married to a woman. This is my story.#LGBTQ #Sec377
#India- Clinical trials: Regulating chaos #Medical ethics #Humanrights
Jayalalitha Achievements- Promoting and Validating Dowry