How buying bots threatens the freedom to inform

More than 30 countries in the world would have put in place troll armies, according to the report of Freedom the Net from 2017.
RSF_en
More and more is being revealed about firms that sell fake followers and fake accounts on social networks that can be used, inter alia, to harass journalists or discredit their reporting by disseminating fake content. Reporters Without Borders (RSF) warns these companies that they are liable to become the new enemies of the Internet and the freedom to inform.

Predators of information benefit greatly from fake followers. A growing number of companies sell both human accounts as well as automated ones to those seeking to spread their message widely. Human accounts can be bought and paid to post opinions on social networks; when these comments are negative the users are called trolls. Automated accounts, also known as bots, specialize for example in automatically retweeting hashtags.

These armies of fake accounts are used by press freedom predators to spread their propaganda widely and inexpensively on social networks, to launch cyber-attacks against media outlets, and to intimidate and harass journalists. Their methods include doxxing, in which personal information about journalists is obtained and used to discredit them, and double switch, in which their accounts are hacked, taken over, and used to spread fake information. Journalists are threatened and insulted, and their inboxes are bombarded with so many emails that they can no longer access them (this is known as email bombing).

Trolling artificially amplifies the views of authoritarian regimes and their supporters, manipulating opinion in order to create the illusion of massive online grass-roots support (astroturfing) and thereby helping to legitimize whatever oppressive or authoritarian practices are afoot.

Hounding a journalist costs next to nothing

Fake followers are quickly becoming a weapon of mass censorship. In January, the New York Times ran a long investigative report about Devumi, one of the largest companies that sells fake accounts to public figures, including politicians, to enhance their visibility. Devumi’s clients have in the past included an editor at China’s state news agency Xinhua, who bought hundreds of thousands of followers and retweets on Twitter with the apparent aim of spreading Chinese propaganda, and an adviser to Ecuadorean President Lenín Moreno, who bought tens of thousands of followers and retweets during last year’s elections in Ecuador.

Last November, journalists with the US non-profit media outlet ProPublica created two fake Twitter accounts and then tried to buy retweets from companies that sell fake followers. Some declined but others agreed. They included Devumi and a company called Followers and Likes. A fake pro-Russian account created by the journalists was able to buy 10,000 retweets for just 45 dollars and a fake English-language account was able to get 5,000 retweets for 28 dollars.

Devumi and Followers and Likes are far from being the only companies to make money from organizations and personalities who want to inflate their follower count. A Google search for “buy followers” currently gets more than 61,100,000 hits.

RSF is very concerned about this growth in organized and automated methods for silencing journalists all over the world, although it is not always easy to establish a direct link between these click subcontractors and the troll armies supported by the predators of online information.

“The predators of press freedom artificially inflate the numbers of their supporters on social networks by means of trolls and use them to discredit what journalists say by drowning it in false content or comments,” said Elodie Vialle, the head of RSF’s Journalism and Technology Desk. “The companies that offer fake followers for sale must not become the accomplices of large-scale worldwide censorship. They must take care not to be added to the list of enemies of the Internet.”

An army for each predator of information

Abetted by those he calls his “yoddhas,” Indian Prime Minister Narendra Modi undoubtedly takes advantage of the use social networks to intimidate journalists with the aim of imposing authoritarian policies. Modi also seems to use bots. By examining the list of his online followers, one can see that many of them are factitious, dormant profiles. 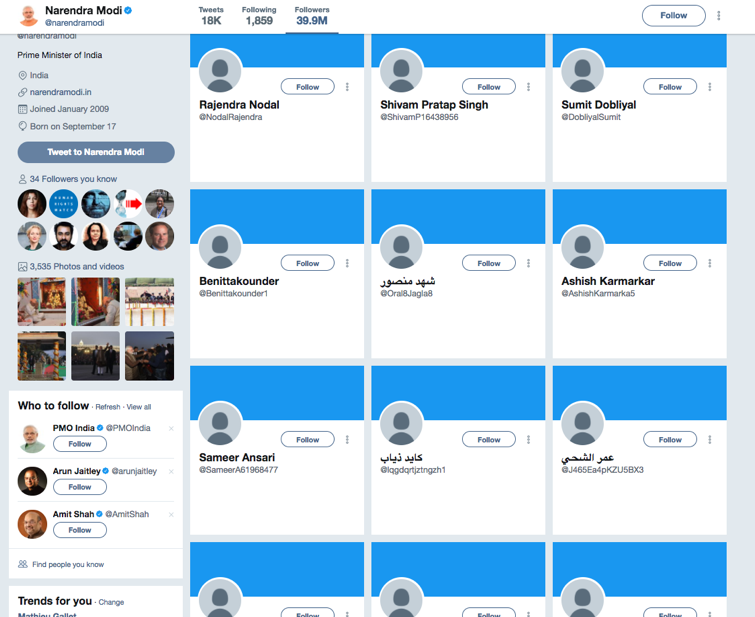 These shocking figures are not just found within the Indian prime minister’s accounts. It is estimated that Facebook has more than 200 million fake accounts – a remarkable potential for predators of press freedom. Platforms have announced that they are going to combat fake accounts, but many trolls slip through the net.