How caste and gender are intertwined in violence against Dalit women 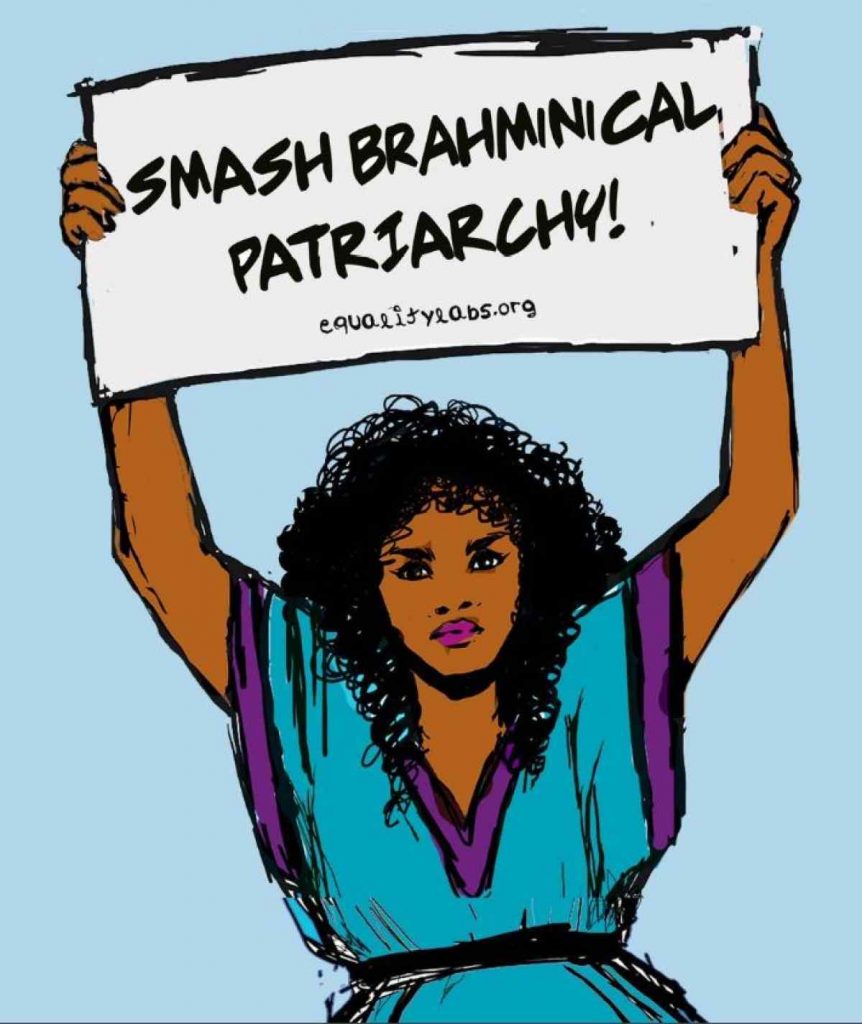 For Dalit women physical and sexual violence cannot be separated from their caste positions. Dalit women’s vulnerabilities multiply when they find themselves in economically, socially and culturally vulnerable position. More often, their resistance, dissent, or questioning triggers violent reaction. A 19-year-old Dalit girl from Hathras went to get fodder for her animals on September 14 with her mother. She never returned. She was allegedly gangraped, and tortured; her tongue cut, and her spine broken by four dominant caste men. These men  belonging to the Thakur caste reportedly knew her, and were in a 20-year-old feud with her family, as per reports. On September 29, she was declared dead after battling for her life at a hospital in New Delhi.

The Hathras case, however, isn’t the first such brutal crime against Dalit women in Uttar Pradesh. In May 2014, two Dalit teenage girls were allegedly kidnapped, gangraped and hanged from a tree in Badaun. In that case, five men including two policemen were accused of the crime. However, the CBI later went on to say that the girls had taken their own lives, and had not been gangraped or murdered – a claim rejected by their family.

In December 2019, a 23-year old Dalit woman was killed in Unnao after being set ablaze by a gang of men while she was on her to court for a rape trial. This violence is not just one ugly face of atrocity against women, but is embroiled in the hideous social character of caste to reinforce the social hierarchy. Atrocities are often used as a tool in caste conflicts. For a Dalit woman, it is the horrible facet of one crime embroiled in another.

The rise in atrocities on Dalits reflects the failure of the state in the discharge of its constitutional responsibility. Apathy takes many forms including tactics of not registering FIR, lacklustre investigation process, the delays in legal process. All these weaken the position of the vulnerable in seeking justice. The evils manifested in the justice seeking process are the extension of the social character. Caste is a powerful and dominant form of social and economic discrimination. Intertwining of caste hierarchy with the powerful in politics is one form. The layers are deep in the form of (un)social networks translating into solidarity in various strata of governance and institutions, and does not invoke trust in and fairness of justice at any stage, putting the victim in further vulnerable and precarious condition. The inaction of the state apparatus perhaps has given more assurance and signals to the crime and criminals.

The 2019 National Crime Record Bureau (NCRB) report shows that India recorded 88 rape cases every day in 2019. At least 11% of the reported rapes in 2019 were from the Dalit community.  As per NCRB’s report, crime against Scheduled Castes (SCs) have increased by over 7% and crimes against Scheduled Tribes (STs) have increased by 26% in 2019 compared to 2018. Uttar Pradesh witnessed the highest number of crimes against SCs in 2019, followed by Rajasthan and Bihar. Madhya Pradesh recorded the highest number of cases against STs, followed by Rajasthan and Odisha.  As far as number of cases of Dalit women go, Rajasthan recorded the most, with Uttar Pradesh the second highest, followed by Madhya Pradesh.

Dalit women are under tremendous social pressure bearing the burden of vulnerable caste and gender identity. They hesitate to report rape cases. Many perpetrators commit sexual crimes with a sense of impunity. According to the NCRB report, nearly 6,000 rape cases were reported in Rajasthan, followed by 3,065 cases in Uttar Pradesh in 2019. Uttar Pradesh and Rajasthan have seen a rise in sexual violence as a tool of oppression against Dalit communities. As per the NCRB, in the last decade crimes against Dalits have risen by 37% while the conviction rate in such crimes increased by merely 2.5%.

Historically, Dalits were subject to social stigma called ‘Untouchability’. They were denied the right to education and the right to owning land. They were also denied the right of bargaining wages, accepting whatever comes to them as alms. They had to perform several duties in the village without any remuneration. Ambedkar observed “untouchability was not only a system of social discrimination against Dalits but also a system of uncontrolled and unmitigated economic exploitation”. They are not in a position to exercise their basic human rights despite Constitutional safeguards. More than 60% of Dalit workers remained as agricultural workers, mostly, landless labourers making Dalits economically dependent on upper castes as agricultural labour. According to the NSSO 68th round survey in 2011, households reporting causal labour as the major source of income was the highest among Dalits in rural India at a staggering 52.6%. The caste system thus contains elements of both social oppression and class exploitation as observed in one of the papers by Professor Nancharaiah. The inequality in the landholding pattern strongly correlates in prevailing social stratification, where landlessness reinforces the social hierarchy. Notions of hierarchy, unchallenged access to village resources and dominance makes the dominant castes to shape the “rules of the village” and “rules of the game” in social networks.

When Dalits seek justice, assert rights or questions dominance, retaliation comes in various forms including denial of rightful wage, social boycott, stoppage of water supply and sexual violence. There is a strong association of atrocities against Dalit with access to land, water and education. Karmchedu massacre where six Dalits were killed on July 17, 1985 in Prakasam district of Andhra Pradesh, the violence was triggered after two dominant caste youths from the Kamma community took their buffaloes to the drinking water tank in Dalitwada. They were washing the buffalos and the feed utensils in that tank when a Dalit boy objected. His courage angered the dominant caste youth. They were about to beat up the boy when Munnagi Suvaatha, a Dalit woman came to the tank to collect water. She tried to protect the boy from the attack of the dominant caste youths. They threw sticks at her, even as she defended herself by lifting the vessel. That became a pretext for a ghastly attack on Dalits. Kammas mobilised themselves and surrounded seve villages, swooping in on the Dalits on July 17 morning. They raided every Dalit house, drove them into fields, where they were beaten, stabbed and axed.  They chased and hunted Dalits for over 7 kilometres. They raped the Dalit women of the village.

In another context of Tsunduru village in Guntur district of Andhra Pradesh, a young graduate Dalit youth was beaten because his feet unintentionally touched a Reddy (dominant caste) boy in the cinema hall. Anger was already brewing as Dalit boys were going to colleges, they were reading newspaper in the barber shop frequented by dominant castes and more so they were watching movies in the theatres purchasing tickets in upper class. The cinema hall incident was just a tipping point that led to social boycott of Dalits by the Reddy land-owning community of the village. On August 6, 1991, the savage attack on Dalits by dominant caste persons left eight persons dead and many more wounded. In a planned attack, the Dalits fleeing for safety were lynched, their bodies stuffed into gunny bags and thrown in the Tungabhadra canal. Dalit women of the village were left aghast and pleaded with the police. But none listened to their cry.

These incidents run across the country and region showing similar patterns of atrocities. On December 1, 1997 in Laxmanpur village, in Jehanabad district of Bihar the Ranavir Sena, a militia of dominant caste landlords shot dead 61 Dalits – sixteen children, twenty-seven women and eighteen men. Five teenage girls were raped and mutilated before being shot in the chest. A vivid report by Human Rights Watch titled “Broken People: Caste Violence against India’s Untouchables” in the year 1999 accounts this horrendous crime. The same report says that Ranavir Sena has been responsible for the massacre of more than 400 Dalits in Bihar between 1995 and 1999.

The dispute over wages and occupation of land have been at the root of recurrent  killings of Dalits when they try to take the possession of the land allotted to them by the government. Similarly, when Dalit agricultural workers insist on the payment of minimum wages as fixed by the government, they become subject of atrocities. The Report of the Commissioner for SCs and STs ,1986-87 depicts this ugly reality of our society. In the late 1980 Chenaganambatti village in Madurai district, Tamil Nadu a mob of one hundred members of the dominant caste Kallar community invaded and destroyed nine acres of paddy fields belonging to the Dalits. In subsequent attacks, the Kallars killed two Dalit men and assaulted three Dalit women, who sustained head injuries.

In 1996, Human Rights Watch undertook a door to door survey of 250 villages in Gujarat. It found that in almost all the villages Dalits who have title to land are not in possession of their rightful land. Those who have possession had not had their land measured or faced illegal encroachments from dominant castes. Land remains an issue of contention and the major cause of atrocities against the Dalits. Dalit couple Tajaram and Bhawari Devi were the only Dalit couple in village of Bhaiyana, Pokhran, Rajasthan who owned land. In December 2006, dominant caste persons entered their home, sexually assaulted and injured Bhawari Devi and ransacked her home. While the police registered and FIR, there were no arrests made.

In June 2012, an attack on Dalits in Laxmipet village in Srikakulam district of Andhra Pradesh led to the killing of five Dalits and badly injuring more than two dozen, not even sparing women and children. A land conflict between Kapu community and Dalits was the trigger for the violence. The ugliest form of this crime was the participation of dominant caste women and children in the atrocity

The sexual violence against Dalit women are not only the ugly face of crime against women in our society. It is deeply intertwined in the caste oppressions, hierarchy where women become the target. It is a horrifying combination of two evils manifesting in the forms of caste and gender identity. Issues relating to land, denial of rightful wage, denial of access to water and an array of rights are rooted in many of these atrocities where women become the target. Are these atrocities because of the lukewarm response from the governance or, silent indifference and apathy from the immediate society, it is difficult to decipher. Are they reflecting the real characteristic of our collective conscience or a reflection of unconcerned governance structure of an eroding democracy?