How Deepika Padukone sold her depression to Nike 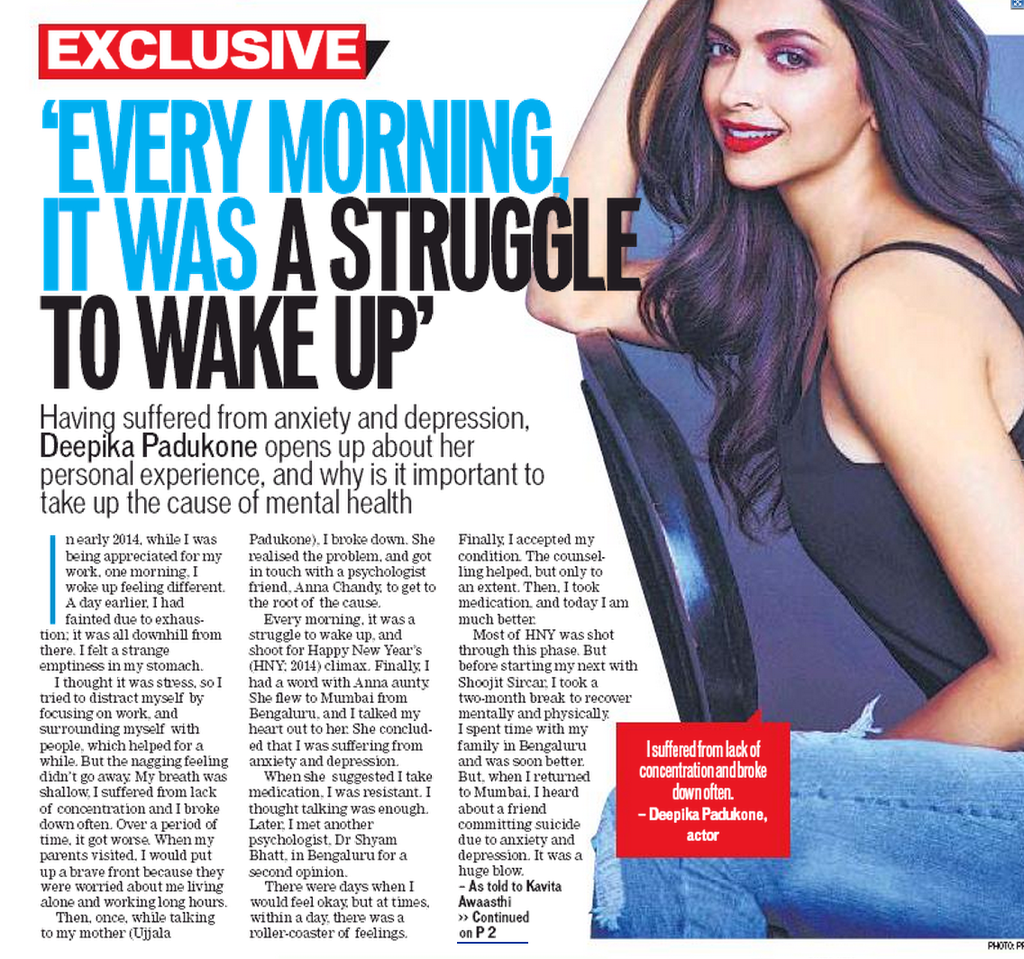 By featuring in the ad, the Bollywood star has undermined and trivialised the seriousness of her own mental condition.

Depression is big business in America. One in eight Americans are on Prozac. Even the pets have not been spared. According to ABC News, nearly three million dogs in the United States are reported to be on anti-anxiety medication.

According to Leon Eisenberg, a professor at the Harvard Medical School, American psychiatry in the 20th century transited from a state of “brainlessness” to a state of “mindlessness”.

In 2011, physician Marcia Angell wrote in the New York Review of Books: “Eisenberg in his later years became an outspoken critic of what he saw as the indiscriminate use of psychoactive drugs, driven largely by the machinations of the pharmaceutical industry.”

In America, there are TV commercials for anti-depressants. A commercial for a pill that claims to cure “social anxiety”, features a famous basketball player.

These commercials play on the before-and-after trope: in one shot you are shown sitting, holding your head in your hands. In the next: you pop a pill, and are out on the town socialising.

While Americans might be excessive in their approach to diagnosing depression, there is ample evidence that anti-depressants work. In India, in recent times, two celebrities have come out and openly spoken about their mental health issues.

Yo Yo Honey Singh broke his silence about bipolar disorder in an interview; he changed three doctors before the right diagnosis was made.

About a year ago, Deepika Padukone appeared on national television with her mother and psychiatrist in tow. She said she had suffered from depression and taken help. There was no shame in doing so. Depression is an illness and like any other illness it can be cured.

Celebrities speaking about mental health issues serve a purpose. It helps destigmatise an affliction that society otherwise sweeps under the carpet.

Padukone’s Live Love Laugh foundation organises sessions in schools, educating young people about the symptoms, how to spot them, and when to seek help. So far so good.

There’s nothing wrong in using your influence as celebrity to make people aware of what can be an extremely debilitating illness.

People suffering from depression often don’t seek help. They internalise the condition. You feel that this is your natural state. We confuse it with normal highs and lows, melancholy, sadness.

But clinical depression is something else; it’s a chronic condition that interferes with your normal day-to-day functioning. By “normal”, I’m not implying that your natural state of mind has to be that of a Red Bull-fuelled American talk show host.

You don’t have to be “buzzing” all the time like George Clooney in Money Monster.

Padukone and Honey Singh were brave to speak about depression. Cynics say that depression is the new fashion statement of the stars, which I don’t agree with.

In celebrity culture, where the “happy and successful” image is everything, why would anyone make up unnecessary tales about being down in the dumps?

Also read – Yo Yo Honey Singh is back, but all is not okay

On July 11, Padukone uploaded a video on her Facebook page. The video has been viewed more than 3.2 million times.

In the post accompanying the video, Padukone says: “Sport has taught me how to handle failure

Two years ago, I struggled with depression. I was sinking. I almost gave up. But it was the athlete in me that gave me the strength to fight and never ever give up!

And so I want to say to every girl and every boy and every woman and every man… play a sport… because it changed my life… and it will change yours too!

This is where the script alters. If the video was about exercise as an antidote to depression, it would have made sense, coming from someone who suffered from it. But no. The video is a commercial (and a very good, slickly shot commercial at that) for Nike.

It features young people in Nike trainers, T-shirts and jerseys. The message that comes through is that you can beat depression if you wear Nike gear.

This is unprecedented. What Deepika has done is this: she has gone and sold her depression to Nike for a whole lot of money. We are left wondering: was it the celebrity psychiatrist, who appeared on NDTV with her a year ago, who cured her, or was it as simple as wearing Nike track pants? It could be a combination of both!

By doing this, she has undermined and trivialised the seriousness of her own mental condition. Now that she’s making good money out of it, you’ll think twice before you take her word.

Yuvraj Singh also cashed in on his cancer by appearing in advertisements for Birla Sunlife Insurance. But that was different.

That commercial played on the theme: life is full of uncertainties. I thought to myself, okay, it might have helped him cover the cost of treatment.

But in the case of the Nike ad, Padukone is endorsing a brand as a cure for depression. Welcome to the world of pure capitalism, where anything can be sold for a price.

And guess what: the gullible consumer swallows the pill whole. Everyone’s happy: Nike, Deepika and the fan.