How Delhi’s Kathputli Community is Being Treated Like Puppets

BY JAHNAVI VISVANATHAN AND KRUTHIKA N.S.

For the performers and artists here, ‘progress’ is coming at the cost of  their passion and their livelihood.

A puppeteer of Kathputli Colony playing his drum to a puppet being manipulated. Credit: Jahnavi Visvanathan/ Kruthika N.S.

Tucked away in west Delhi’s Shadipur neighbourhood, Kathputli Colony is easy to miss. The bustling slum, known to have inspired the ‘magician’s ghetto’ in Salman Rushdie’s Midnight’s Children, is home to about three thousand families comprising a community of puppeteers, singers, magicians, musicians, dancers and a variety of other performers. A quick glance around the area mostly reveals dirt, leaky plumbing and broken windows. Our attempt to locate an artist amidst the rubble begins with a confused enquiry at a tea stall – but finally leads to a family of puppeteers.

The long walk to their home winds through a maze of open lavatories, kitchens without electricity or water supply and tiny alleys that double as play areas for the children. Deep in this dense community is a small tenement that houses the large family. Puppeteer Vinay Bhat introduces us to his father and apologises for having to leave soon thereafter. He explains that he has a second job to help sustain the family.

It is easy to get lost in the clamour and colours of the household, which is immensely passionate about its art and has worked tirelessly to increase its influence. Vinay notes with pride that members of their community have performed in over ten countries, and his grandfather, Naurang Lal Bhat, received the prestigious Sangeet Natak Akademi Award. 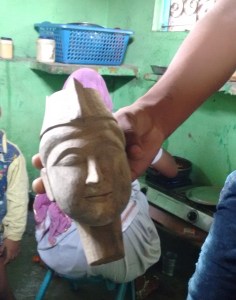 The family explains the process of making the puppets from Mango wood. “Every puppet has a name,” smiles Vinay, and adds that the one he has showed us was a month’s work for him. The detailing is intricate, and a even a cursory glance reveals the skill and expertise that went into its making. Undoubtedly, the community is deeply attached to its craft. “We can’t work anywhere else. This land is all we know,” says Vinay’s mother softly, whose granddaughters are now the same age she was when she moved to the colony 50 years ago.

Her mention of working elsewhere would puzzle anyone who does not know about the colony’s recent past. Outside the realm of art, life has become increasingly difficult for this impoverished community. The community has been embroiled in a legal battle with the government for its land for almost a decade now.

The costs of living

Like Vinay’s family, the other artists of Kathputli Colony welcome visitors warmly into their houses and candidly discuss their deep attachment to the place they have called home for over sixty years. “Hamari khushiyan is zameen se judi hui hai (Our happiness is tied to this land),” says Raju Bharti Bhat, a singer and versatile instrumentalist. Raju Bharti has lived in the colony all his life, with his grandfather having settled here half a century ago. At our request, he sings a Sufi ghazal, following which he seamlessly transitions into an account of the harassment his people have faced at the hands of the Delhi Development Authority (DDA).

The DDA has effected the sale of the land to Raheja Developers and neither party has given the residents any assurance of adequate compensation in writing.

“They [the DDA] are selling this entire colony to Raheja for a meagre six crores, which is not even a fraction of what it is worth,” alleges Raju Bharti. While there has been ample resistance by the community against the move, a few residents have succumbed to the pressure of the authorities. They have agreed to move to Delhi’s Anand Parbat area, where Raheja is getting the residents to relocate temporarily, though it intends to finally resettle them in apartment buildings that are to be built on this land. Rickshaw-pullers and cobblers from the colony have accepted the meagre compensation and are currently living in deplorable conditions.

Raju Bharti lists the various problems with the temporary accommodation that Raheja and the DDA have offered the community. The huts are largely made of fibre, pointing out the obvious fear his people have of a fire breaking out. He adds that sanitation conditions in the temporary accommodation are also poor, with the few people who have already moved having fallen ill repeatedly. 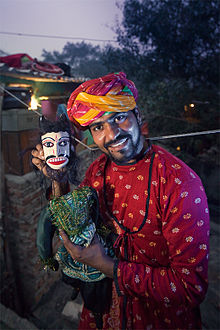 A resident of Kathputli colony with his puppet. Credit: Wikipedia

Such actions are, perhaps, explained by the frightening policy-making behind this takeover. Under the guise of ‘transparency’ in the rehabilitation process, the DDA has allotted permanent unique numbers (PUN) to each member of the colony, a system that includes a PUN certificate containing family details, photos, biometrics and a computerised barcode matrix relating to each individual. The potential privacy violations that could arise from the misuse of this move are highly worrisome, to say the least.

Aside from being concerned about losing their homes, the community has much to worry about even living where they are. Their living conditions are far from hygienic, and they have no electricity or gas. They also tell us that they are forced to travel three or four kilometres outside the colony to fetch water. The authorities, under the pretext of ‘improving’ their living conditions, have been arm-twisting residents out of the colony. However, the artists think they have seen through this.

A child looks on as a puppet is manipulated. Credit: Jahnavi Visvanathan/ Kruthika N.S.

“Hum bhi vikas chahte hai [“We also want development”],” Raju Bharti acknowledges, although he goes on to admit that the community is understandably apprehensive of living in the high-rise buildings that Raheja intends to construct. Such housing is unlike any that the residents of Kathputli Colony have ever known, and they worry that they won’t be able to continue practising their art in such unfamiliar conditions. Many artists work with large puppets or heavy drums, which puts logistical obstacles in the way of living comfortably in a high-rise. The residents are understandably apprehensive of how their community will find the space to perform freely within the fragmented confines of an apartment building. ‘Progress’, when it is at the cost of losing one’s livelihood and passion, is out of the question for the community, and for good reason.

Raju Bharti says the community is eager to increase the influence of their art forms and of Indian culture abroad, but adds that the government has never supported their work, which gained attention only when the Raheja controversy arose. Despite the colony’s pitiable circumstances, however, he remains admirably positive, telling us simply, “Raheja-saheb hamara dushman nahin hai, par aise hum kaise jee sakte hai? [“’Mr. Raheja’ is not our enemy, but how can we live like this?”]

Dalit man dies of hunger in UP village, wife fights for life
Australians Will Not Allow the Adani Project to Go Ahead
Gujarat Police - United in service, divided by gender
Narendra Modi shall NOT be granted visa: US official