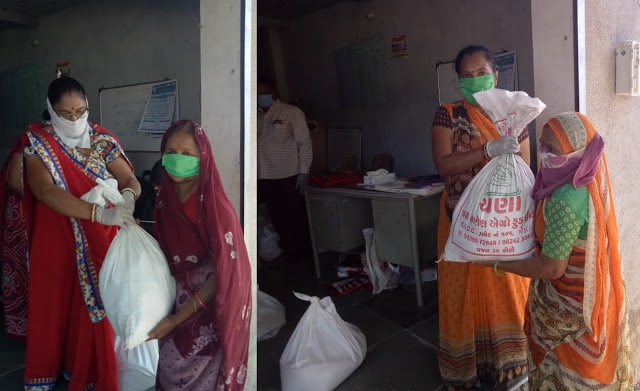 By Sanjay Dave*
In these difficult times of coronavirus pandemic a unique initiative has been undertaken by Utthan, an NGO based in Gujarat, to turn adversity into opportunity for rural poor and marginalized. Due to lockdown the daily wage labourers stopped getting work, and thus there was no source of any income for them.

Active for the last 40 years for sustainable development of marginalized communities in Amreli, Bhavnagar, Dahod, Panchmahal and Mahisagar districts of Gujarat, Utthan undertook the initiative to provide ration to them. Ration and food were distributed in all the states of the country, so what was different about Utthan’s initiative?

A novel and significant facet of Utthan’s effort is that it focused on building a bridge between farmers and end users of rural areas. Claiming to contribute towards socio-economic development of 14 lakh people of 412 villages, it conducted an informal survey during the initial days of lockdown to get an estimate of the ration needed by poor women in the rural areas. This survey was done by Utthan members active in villages through mobile. The survey revealed that small farmers could not go to market yard in the towns to sell their produce and were compelled to sell it to the village grocers/businessmen at whatever price that was offered to them. This was because poor farmers could not afford the transportation cost of taking their produce to the market yard.
Pravinbhai Bhikadia, CEO of Utthan, says:

“Through our initiative we tried to ensure that livelihood of women farmers was protected by providing them a platform to sell their produce of food grains locally. Food grains were distributed to the poor in the same areas. Our priority was to help the women farmers by buying their yield of food grains like wheat, bajri and corn. We bought all the food grains of the local farmers and money for this was transferred in their bank accounts.”

Ration provided by the government as a part of its relief efforts is enough just for one to two weeks. Thus, this was a noteworthy initiative by Utthan to bridge the gap between rural supply of food grains and local demand of the poor.
Valiben Palash, a 58 year old woman farmer of Raiyavan village of Dhanpur taluka, had harvested her yield of 15 bighas in March. Due to lockdown she was worried about finding a market to sell her produce of wheat and corn. She found relief as she could sell her produce at a rate of Rs 19 per kg to Utthan. Had she sold it in the market during normal times, she could have got a rate of Rs 20 to 22 per kg. However, due to lockdown this was not possible.

She says, “If I had gone to market to sell my yield I would have incurred transportation cost of Rs 5 per kg. This money was saved as I could sell it locally.”
On the other hand, Shakuben Palash, a poor woman of the village who has a below poverty line (BPL) card, did not have any grains for her family. Her only source of income is a small piece of land which is joint property amongst her extended family.
In better times she usually migrates to earn her livelihood, but because of lockdown this was not possible and thus there was no source of income for her. She was provided food grains by Utthan during these difficult months.
There were a number of farmers like Valiben who were struggling to sell their yield and many more affected women like Shakuben who had no food grains. Looking at this, the initiative by Utthan was like a boon in the targeted villages. The rural poor got food grains and the local farmers found a market to sell their yield.
Gitaben Boriya, president of a local women’s group of Aakavada village, which was formed with Utthan’s assistance, was a part of this initiative. She says:

“I identified 27 families of my village consisting of widowed women, daily wage earners and physically challenged individuals. Our group bought grains from women farmers of the village. Besides, we bought other items like oil, spices, tea and sugar from the town and prepared ration kits for the poor.”

Thanks to this effort farmers could sell their yield at a good rate and were saved from economic exploitation by the local grocers/businessmen. For Maqsoodben Madari and 34 other women of Mota Saraniya village of Mahisagar district, this was new lease of life in the holy month of Ramzan.
Utthan’s prominent leader Nafisaben Barot says: “Our efforts were focused in 57 villages of Bhavnagar, Mahisagar, Panchmahal and Dahod districts where Utthan is active. In all, we bought grains from 78 women farmers and made a payment of Rs 9,12,980 which was the income for them. Totally, we bought 44,136 kgs of food grains and prepared 3,000 ration kits in all.”
Another leader Pallaviben adds: “Each kit consisted of 10 kg wheat and 5 to 10 kg bajri or corn. If one looks at the saving in terms of efforts by the women farmers, time and money one can say that the farmers made a saving of 22%. This saving was additional income for them.”
Thanks to the relief initiative by Utthan, 3,000 families of 145 villages of Bhavnagar, Dahod, Panchmahal and Mahisagar districts were provided with much needed ration kits consisting of food grains and other daily essentials.
Utthan also provided employment of making masks to 80 women of the villages. Total income to the women from this was Rs 3,35,000. As many as 67,000 masks made by these women were distributed for free in 44 villages. Each woman was paid Rs 5 per mask whilst men were paid Rs 4 per mask.
With these efforts Utthan has shown a path to provide employment opportunity to the rural women in their difficult times and spread awareness about sensitizing the needs of rural women, who are pillars of their families. .
—
*Charkha – Development News, Gujarat