It’s high time we have an open discussion about a process which is as inevitable as diet, exercise, sleep and sex.

Dr Dhanya Lakshmi
Three weeks ago, on the day her mother-in-law expired, a friend called me up frantically, to ask for the name of a tablet to postpone her imminent menstruation.

I was perplexed because, in the first place, I didn’t know the name of that tablet (people expect any “female doctors” to be an expert in all issues related to women without giving any thought about her field of expertise) and, secondly, I was wondering why would she want to delay her period which according to her was about to commence any moment.

I took help from another colleague and got the name of the tablet for her. However, I did not ask my friend why she wanted to postpone her period.

I could not comprehend what was so unnatural about menstruating on that particular day. For whatever reason, her discomfort was palpable.

When postponement of a physiological phenomenon like menstruation which is as natural as sneezing, is demanded by the society from a woman, by altering her hormone levels by using chemicals, no woman would feel elated.

This event happened in Kerala, one of the most-literate states in India, where even today menstruation is a taboo and menstruating women are considered “unclean” and are not allowed to enter prayer houses.

This event forced me to ponder about the various issues I had with menstruation and recapitulate my “menstrual history” on World Menstrual Hygiene Day, which we celebrated on May 28.

Menstrual history is not something that should be hidden and it is high time we have an open discussion about a process which is as inevitable as diet, exercise, sleep and sex. 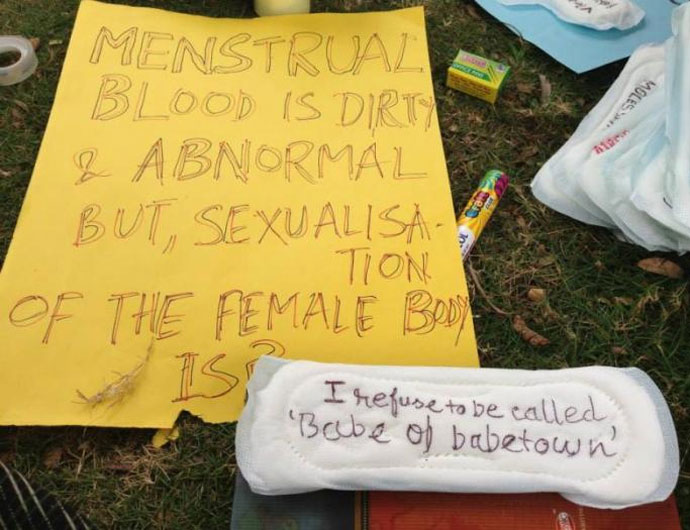 It’s high time we have an open discussion about a process which is as inevitable as diet, exercise, sleep and sex.

World-wide, May 28, is observed as Menstrual Hygiene Day to spread awareness about good hygiene management for women and adolescents. The 28th day of the fifth month in a year was selected by a German NGO, WASH, because women in general bleed for an average of five days every 28 days. Though I do not appreciate the fact that there needs to be a specific day for creating awareness about a completely natural physiological process which occurs in half the population of the globe, such efforts serve to initiate some discussion in mainstream media and social media, aiding people to reflect and respond.

Yes, long before I even started menstruating, I had my own issues with this phenomenon. In my mother’s highly conservative family, during menstruation women had to sleep on the floor in a separate corner of the house for three days without touching anybody else.

They were served food in a separate plate and had to wash their plates and clothes separately.

In my childhood, during summer holidays spent in my mother’s house with grown-up cousins who had already attained menarche, I used to feel sad and dejected that I couldn’t be with them for those three days while they remained confined to that small corner of the house.

As a child, I never understood why I had to take bath before touching others or entering into other rooms in the house after accidentally touching my cousins who were menstruating. Sometimes, I used to insist that I wanted to sleep with them and eventually they had to wash all my clothes along with theirs.

When I started menstruating

When I got my first period, my parents informed all our relatives about this phenomenally natural event. I really wonder why even now this practice prevails in my community. Recently, when my mother called to say that one of my nieces has started menstruating, I had to take additional effort to make her understand that, as a Geneticist I was interested only in children who did not menstruate at appropriate age.

Why is the commencement of menstruation given so much of unwanted publicity?

Why should it be made a public affair where adult relatives visit your house and give new clothes and money instead of any sensible and scientific information on menstruation?

How much ever I try to forget, the awkward grin on the faces of relatives who visited my house on that day, still remains etched in my mind.

Those days carrying a sanitary pad to school and “smuggling” it from classroom to bathroom without the knowledge of others used to be a herculean task. We were in a co-education system till Class 7, and girls who had to bring pads to school would be so “ashamed” that they would tell the boys that those were biscuits which they ate inside the bathroom.

Once some NGO had come to enlighten us about menstruation and strangely, boys were denied the “enlightenment”.

In high school, though it was an all-girls school, I can vividly recall the embarrassment and humiliation we all experienced during our monthly cycle. Sadly, no teacher in the school nor the counsellors who came, could inculcate in us enough confidence to carry a sanitary pad openly without discomfiture.

Nobody could convince us to be bold enough to talk about menstruation. Much like a brand name of sanitary pads (Whisper), it was to be discussed in hushed tones.

Only after living in a government hostel in a Medical college, with absolutely zero privacy, that I slowly overcame the uneasiness of menstruation.

Most of our friends who stayed in the same room, used to get our periods together, which we learnt was due to the effect of pheromones. Even in medical college, sneaking pads into bathrooms and toilets which were not women-friendly, with no bins to dispose used napkins, was a strenuous exercise.

I don’t wish to make a fuss about all those days where we worked 36 hours at a stretch, even during our menstrual days in the most unhygienic environment with indecent restrooms.

Issues I still have with menstruation

My cycles are painful and incapacitating at times which I manage by taking NSAIDs (nonsteroidal anti-inflammatory drug). Even women have wrong notions about taking NSAIDs for period pain relief.

One of my friends firmly believes that taking antispasmodic tablets to reduce pain would decrease fertility. I have failed miserably in convincing her that prostaglandins cause period pain by causing uterine contractions and taking medicines which temporarily block prostaglandins does not have any effect on a woman’s fertility. NSAID’s have made my period pain bearable enough to continue working on those days.

Like most women, I also deal with my cyclical emotional changes when I get moody premenstrually. (Don’t get me wrong here. Every time I get angry doesn’t mean I am menstruating).

I don’t like the feel of the sanitary napkins between my legs. I prefer to decide for myself what I need to do about my period pain, period days, my activities and my blood stains, and I don’t expect any unsolicited advice from anyone else.

Menstrual blood, unlike urine and faeces, is not an excretory product but in reality is the endometrium which gets prepared every month for pregnancy, which if unused, gets shed. I can’t understand why women are considered unclean and unhygienic when they menstruate. Whether you menstruate or not, hygiene depends on many other factors. I feel if “holy people” in prayer houses feel “unclean” menstruating women should not be allowed inside, then anybody who urinates or goes to latrine shouldn’t be allowed inside.

Because if “cleanliness” is the main issue, those are the real excretory materials which are harmful and “unclean”. I don’t wish to engage in any conversation with people who bring up “pseudo-scientific” explanations for menstrual taboos. (When some consider a menstruating woman as a Goddess, why does she need to go to a temple at all?).

My latest experiment with menstrual hygiene

I have started using menstrual cups recently and I find them one of the most exciting inventions that can actually help women.

They are environment- and pocket-friendly but demand a bit of expertise in being used effectively. They have always been in the market without much advertisement and exist mainly by word of mouth.

Our conventional beliefs about saving a woman’s hymen, discouraging any “insertion” into her vagina and our inability to reuse things, have made these cups unpopular compared to sanitary pads. I am in the process of learning to use them effectively.

I aspire to be part of a world where children (including male, female, transgender and children with special needs) grow up with scientific knowledge about menstruation, voice out their concerns, find ways to manage menstrual issues effectively and more than that become confident in “being with” a menstruator or “being a” menstruator.

Edward Snowden on #Aadhaar leak: Governments' use of private details leads to abuse
Enormous corruption complaints and enrolment violations, the Aadhaar agency has refused to allow CSC...
The Hindu: From Dynasty To Plain Nasty
Karni Sena and Sanjay Leela Bhansali - Both United in misogyny #Vaw