How is Menstruation Linked to Purity? SC Asks Sabarimala

The apex court observed that all practices are acceptable until there is no distinction between genders. 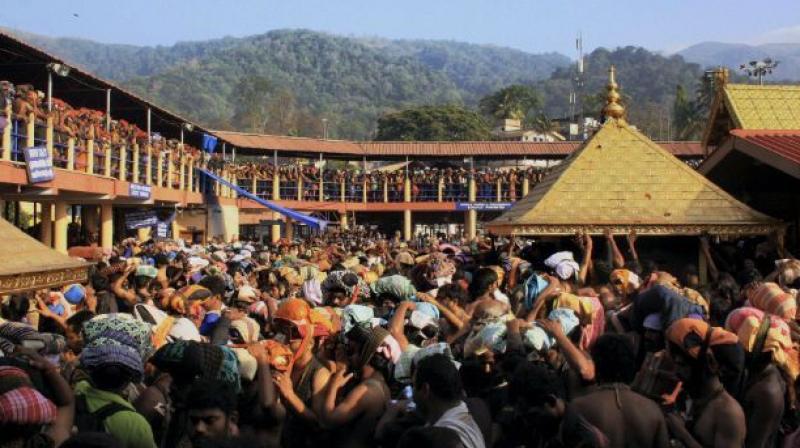 Devotees in queue at the Lord Ayyappa temple in Sabarimala. (Photo: Deccan Chronicle)

New Delhi: The Sabarimala temple management on Monday told the Supreme Court that the ban on entry of females aged between 10 and 50 years was because they cannot maintain “purity” for 41 days on account of menstruation, prompting the judges to ask how periods could be linked to purity.

Travancore Devaswom Board, which manages the shrine in Kerala, also claimed the ban was not discrimininatory and based on “reasonable classification”.

“There is no gender discrimination. There is a reasonable classification by which certain class of women are excluded,” senior advocate K K Venugopal, representing the Devaswom Board, told a three-judge bench headed by Justice Dipak Misra.

“What is the fulcrum of this classification,” the bench asked referring to the bar on entry of women of a particular age group.

Venugopal said girls and women in the age group are excluded as they cannot maintain purity for a period of 41 days due to the menstruation.

“Do you to mean to say that menstruation is associated with with purity of women? You are making distinction based on purity… Now the question is whether the Constitutional principles allow this?” the bench, also comprising Justices V Gopala Gowda and Kurian Joseph, said.

At the outset, Venugopal said women and men both are allowed entry into the temple and hence, there is no case of gender discrimination and females of a particular age group are not allowed due to the centuries-old custom.

There are as many as eight Lord Ayappa temples in Delhi and NCR region and women are allowed inside, he said, adding that the Sabarimala temple is different.

Women are allowed inside in Sabarimala also, but they cannot climb eighteen sacred steps on the hill unless they maintain 41 days of purity, he said, adding that the High Court verdict, favouring the practice, is a judgment “in rem” (continuity) and the apex court should not re-examine it by entertaining a PIL.

The arguments remained inconclusive and would resume on May 2.

The court is hearing a PIL, filed by Indian Young Lawyers’ Association seeking entry of women into the Sabarimala temple, located on a hilltop in the Western Ghats of Kerala’s Pathanamthitta District.http://www.deccanchronicle.com/nation/current-affairs/250416/are-you-associating-menstruation-with-impurity-supreme-court-asks-sabarimala-trust.html