How Jindal Tortured an adivasi woman , a nurse in govt hospital to acquire land #Vaw #WTFnews 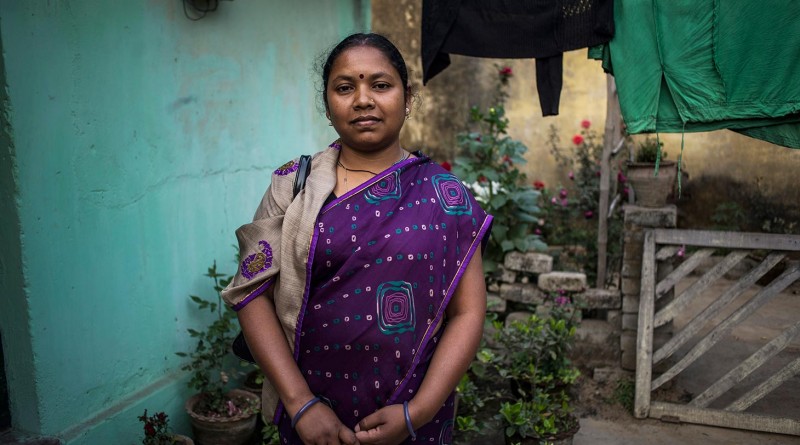 This is a story of an Adivasi woman Tarika Lakra. The 32-year-old is a nurse in the Tamnar village government hospital in Raigarh district in the central Indian state of Chhattisgarh. She once had her orchard with 27.5 acres of fertile land packed with about 300 mango trees, 400 cashew, 315 sagwan teak and 400 of the local mahua. Her father had spent his life’s savings on this piece of land, Lakra says, irrigating it and putting in two tube wells.

“Lakra’s fertile orchard now belongs to JSPL. But her land was purloined, not purchased, she says. In May 2003, Lakra went out to her orchard to check on the harvest, only to find a mountain of debris dumped on the land. “I thought it was a mistake,” she says. Though Lakra had received a company notice asking for her land, she had not yet made a decision to sell. But when she went to her farm, a group of thugs stopped her at her gate, claiming that the property belonged to JSPL.

She filed a complaint accusing the company of grabbing her land, but the police and state government officials ignored her, Lakra says. JSPL paid her about 1.5 million rupees ($24,000) as compensation, which she estimates to be a fourth of the market value for a plot as fertile as hers. JSPL’s lawyers in Chhattisgarh High Court-Bilaspur countered that the orchard had only one nilgiri tree, one tamarind tree and a thatched house. “They said it was barren land and they’d paid its worth,” scoffs Lakra. The court ordered the company to stop building on her land until the case was settled, but the thugs stayed, and soon the O.P. Jindal engineering college and a private road were built where her trees once grew.”[i]

The atrocities that were committed on her family by Industrialists and bureaucrats, is soul cringing. She shared her story with well-known legal experts at Hidaytulla Law University, in the presence of retired Supreme Court Judge – A K Patnayak, Human Rights advocate – Colin Gonzalvis and All India Lawyers Union secretary- Shaukat Ali.

My father was a government employee. He passed away in 1998. Our land is three kilometers away from our village. In 2000, Naveen Jindal himself came along with two friends to take our land, but my mother refused to give it since it was the source of livelihood for us two brothers and sisters, after father’s death. We had even paid bribe to get electricity to our village, and creation of Chhattisgarh state was an unfortunate incident for us. Electricity wires were stolen, we complained but no action was taken.

In 2003, we got to know that our land will be acquired. We got to know from Sarpanch that there has been no Gram Sabhas in Punjipathra for land acquisition. Kotwar and a constable told my mother that our land falls in the area of proposed land acquisition, and told to come and collect compensation. After my mother refused, the harassment started. One day boundary wall of our house was being broken, my mother herself a government employee went to give notice to Garghoda SDM Sunil Jain. Mother is a patient of sugar and BP, still she was kept as hostage there. On one side, mother was locked up, on other side I was standing in our land with my husband and brother. We were protesting and saying we won’t let bulldozer run in our land.

Meanwhile in SDM office, mother was constantly threatened that if she doesn’t agree to give the land, her kids would be crushed by the bulldozer. Outside office, D K Bhargav and Rakesh Jindal (who was a broker of Jindal) were sitting. Mother called us to SDM office, when it was decided that bulldozer will be brought for our land.

We were there for four hours, bulldozer had run through our land. Mango-Cashew trees were destroyed. It became a dirt track and vehicles started moving from there.

Brother’s murder turned into an accident

Mother did not sign of the agreement papers and policemen started harassing my brother Praveen. They used to call him every other day to police station, make him stand in sun and give punishments. On April 1, 2007 my brother had gone to Taraaimaal with his friends. On April 2 morning, we heard that he has met with an accident. When I reached the spot, Praveen along with his other friends were dead. In any way, it did not look like an accident. Government-Administration had turned his murder into an accident. Half of our land was occupied now. When we tried filing complaint, instead a case was filed on my mother for breach of peace.

…and those horrific days

I was in Punjipathra with my mother ( husband and kids were at in laws) , was under high fever that night , next morning , was on bus stop alone waiting for the bus to Tamnar as that’s where I am posted (Health Department).  I went alone as my mother is too old to accompany me.

I was waiting at bus-stop, after 20-25 minutes, a jeep came and the driver enquired whether I was going to Tamnar?  I boarded it as I was weak and quite exhausted. I lost my consciousness during the travel (don’t know what exactly happened) but when I regained consciousness, I found myself naked, blind-folded and tied to bed.

I could hear people (2-4) addressing each other as manager-director .I screamed, a man rushed in and threatened – ‘a part of your land is already occupied (forcefully) by us, write a letter to Collector, that you are giving up possession for your other land too’. Then they sexually assaulted me in ‘animalistic’ manner (Sobbing).You’ll keep your head down in shame if I told you about those Jallads. When blindfold was removed, I wore back my clothes. I was then dropped to the same spot from where I was picked up.

I couldn’t tell my sufferings to my mother , however , as soon as my husband came back (3rd June 2013), we went to the Tamnar police station to complain , however the Munshi there with-held the complaint.

On 5th June, police-men came to our home and threatened my husband that stop pursuing the matter or else he would be eliminated in an encounter and tore away the complaint in front of us.

I have sent my kids outside Raigarh to a safer place, they still cry for me, it was a difficult decision to separate them but an essential one. In 2014 I decided I need to fight, my brother’s murder (by Jindal goons) and the guilt of not being able to put up a fight was making things unbearable.

After much struggle the case was put in SC on 7th April 2015. The lawyer who represented Jindal in SC is present in this very gathering, talking about human rights, won’t name him but this pains me a lot. One side we had 1-2 lawyers representing us and on the other side Rakshas (an evil person) like Jindal was represented by 25-28 lawyers.

How can this gathering of advocates, judges talk of human rights, when justice-judges are being brought off , what chance do vulnerable people like us have? With money-power courts are brought off and vulnerable lives are destroyed, and the very people entrusted with protection of Constitution play this tragic game.

I had to virtually beg to the Collector to allow me join the job (after I came back), I wasn’t even given any security (she was threatened by Jindal goons on duty). I was transferred to a far-flung place Chaplae , I went to HC , my matter was sent to Commissioner, after much begging I was transferred to sariapalli, however the harassment continues, I am not even being given salary by the government.

In this environment, I don’t think justice will ever be done. The speakers before me have already expressed their helplessness in front of big industrialists. However I will fight and I will fight till I die and I will win (heavy sobbing)

(The desire to make a Sacrifice is in our hearts

I challenge them to fight, I will fight at every corner and will win this fight.

Will fight, until I am alive…

I have sent my six year old son outside (Raigarh) to study. It was a difficult decision to make. In 2014, I decided that I will fight. When I went to Supreme Court, the case/petition was rejected by Registrar. On April 7 2015 my case was accepted in Supreme Court. The lawyers who were standing for Jindal, are present at this very program. It is painful and disturbing to look at them. From my side 1-2 lawyers, on their side 20-20 lawyers. How will a common man get justice?

When I returned after the appeal, collector did not allow my joining again, I was transferred, and my salary was stopped. Even FIR is not filed, but I will fight. I will fight, until I am alive.

All India Lawyers Association secretary Shaukat Ali said, Tarika reached in the program through Human Right Law Network. Whatever she had put forward in front of legal experts and social activists was terrifying. Each and every thing is unimaginable. What Tarika has put forward in front of us, is the truth of Punjipathra. We are with her.

The article has been translated and edited by Ishan Nag and Akash Poyam, from Patrika News.

Narendra Modi Attacks His Henchmen-Chanakya and Machiavelli Rolled into One
‘Draupadi Taught Us How to Behave with Husbands’ ?
Open letter by Jean Dreze regarding attack on his partner Bela Bhatia
ABVP’s Mischief in Fergusson College, Pune: A Tale of Two Letters