How Kerala contained Covid 19 in 100 days 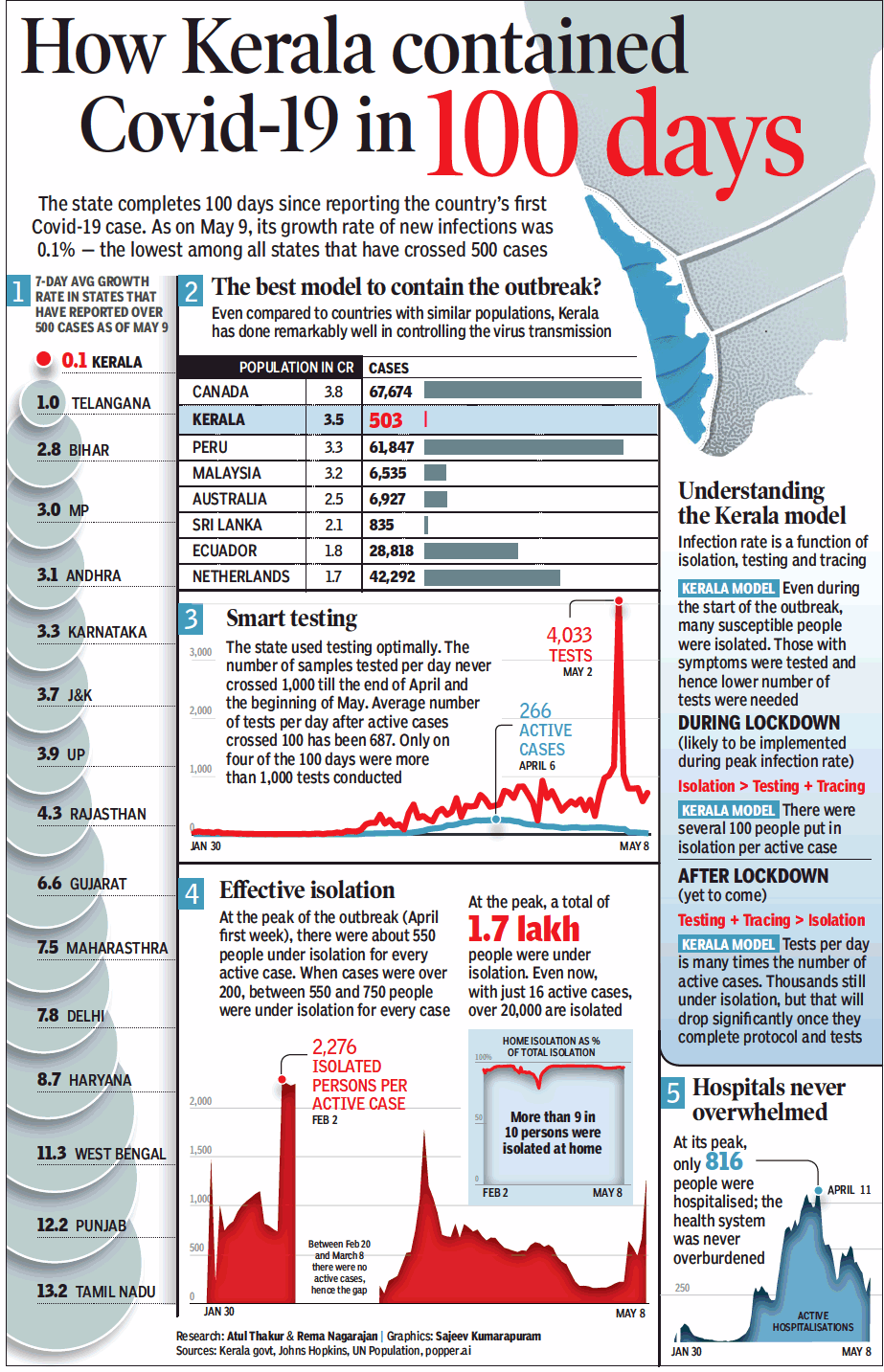 100 days after Kerala’s first case, CM Pinarayi says ‘we have flattened the curve’

The state has only 16 COVID-19 patients in hospital now.

It was on January 30 that India recorded it’s first case of coronavirus. A student from China’s Wuhan University, who had travelled all the way back to her home in Kerala, and tested positive for the virus.

More than three months later, India is grappling with more than 57,000 coronavirus cases and hoping that simultaneous lockdowns will help the country flatten the curve.

Kerala, which had initially seen a spike in cases, has recorded zero cases in five days in the month of May. Though even the Centre has praised Kerala for its efforts, Chief Minister Pinarayi Vijayan had in most press meets said that it was too early to speak about achievements and people needed to be wary of the virus.

aking to Twitter, state Finance Minister Thomas Isaac today morning said “On the 100th day of confirmation of the first case of COVID, Kerala flattened the curve. Only 16 active cases remain in hospitals. We are bracing ourselves for the 3rd wave”.

On the 100th day of confirmation of the first case of COVID, Kerala flattened the curve. Only 16 active cases remain in hospitals. We are bracing ourselves for the 3rd wave.#COVID19 #COVID19India #Covid19Kerala

His claim came a day after Kerala chief minister Pinarayi Vijayan said the state had been successful in containing the virus in January, when the first case was reported, and during the second wave of infections in March.

“It has been 100 days today since the first COVID-19 case in the country was reported. The disease was first confirmed in a student who returned from Wuhan. In the beginning itself we were able to make sure that it wasn’t transmitted to others. It was in the second week of March that the state witnessed the second wave. Two months after that, it can be said that the curve is flattened,” Pinarayi said.

He added that Kerala has shown great courage and resolve. “Years from now, we should be able to look back & take pride in how we responded to this,” he said.

“Our recovery rate is comparable to the highest in the world. We are doing everything to avoid a third phase but we are prepared for any situation”he stated, while cautioning people to be “more careful in the coming days given the expected return of thousands of Kerala residents stranded abroad”.

Under the Vande Bharat Mission, two Air India flights landed in Kerala, bringing back over 350 Indians stranded in Abu Dhabi and UAE, after lockdown was imposed and flight operations were closed.  “We expect responsible behaviour from the general public in this regard,” the Chief Minister said.

Kerala has reported first three coronavirus cases in India in January and since then the state has done extremely well to contain the virus. Out of the 503 cases reported in Kerala till date, 484 people have been cured of the deadly disease, while only 4 deaths were reported in the southern state.

Kerala has also took some different steps in containing the spread which helped in flattening the COVID-19 curve. The state has quarantined suspected cases for 28-days, while other states are doing this for 14-days. Kerala government also used the walk-in kiosks for mass collection of samples, inspired by South Korea.

On Friday, however, the CM acknowledged that the curve has been flattened and that the state should take pride in its response.

The Chief Minister also added that the co-operation from the people of the state to ensure that home quarantine was followed strictly, made the state stronger in its fight.

On Friday, the state reported one new case of the virus. It was reported from Ernakulam district and the patient had returned from Chennai after the lockdown rules of travel were relaxed.

“He has kidney disease too,” the CM said.

What gives Kerala a lot of relief is that though the state had a total of 503 cases, just 16 people are under hospitalisation now. The samples of ten patients in Kannur turned negative for the virus.

A total of 20157 people are under surveillance- 19810 are in home quarantine and 347 are on isolation in hospitals. 127 people were admitted to hospitals on Friday for displaying symptoms of the virus.

Kerala has till now sent 35856 samples for examination. At present there are 33 hotspots in the state, including five in Kannur district, four in Wayanad, three in Kollam and one each in Ernakulam, Idukki, Kasaragod and Palakkad.

“The state has been successful in containing the virus but it should not be taken for granted. In the coming days that we should stay more united,” he said.

Need to ask, on sidelines of triple talaq debate: Is polygamy constitutionally valid? Is it un-Quran...
‘Godse is a National Hero who must be Taught about in Schools’- Appeal- #WTFnews
Ishrat Jahan case: HC raps CBI, tells it to focus on encounter angle
8 Months No Bail: Dr Kafeel Khan’s Health Deteriorates, Wife Rushes to Delhi in Search of Justice