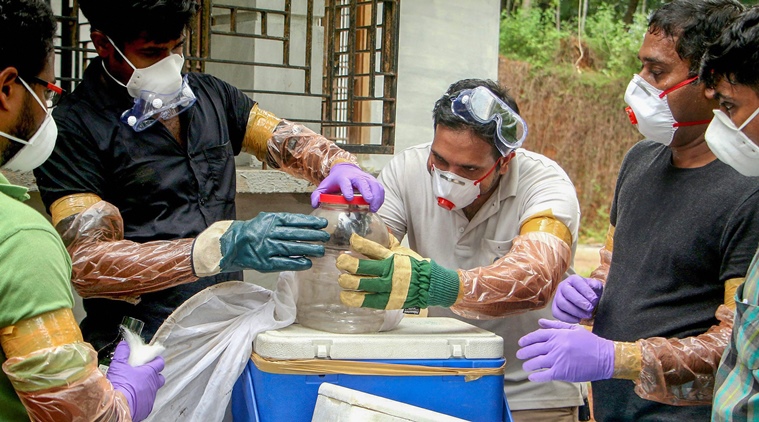 Kozhikode: Animal Husbandry department and forest officials collect bats from a well of a house after the outbreak of 'Nipah' virus, near Perambra in Kozhikode on Monday. The Nipah virus has so far claimed three lives in Kerala while one person is undergoing treatment and 8 others are under observation in Kozhikode district. (PTI Photo)(PTI5_21_2018_000193B)

The story of the brave nurse Lini PN, who got infected from Sabith and passed away days later leaving two young children, also shines through at a time of immense grief. It is pertinent to note here that Kerala’s health department, though familiar with the H1N1 and the dengue infections which come calling every monsoon, has never battled the NiV virus before.When 23-year-old Muhammad Sabith, a resident of Changaroth panchayat in Kozhikode district, died on May 5 after complaining of fever-related symptoms, it went largely unreported. Health authorities in the state at that time had no clue that they were standing on the cusp of an unknown viral infection, the likes of which they had never witnessed before.

It was in the third week of May when Sabith’s elder brother, Muhammad Salih, too passed away after reporting the same symptoms, that the family and the locals were jolted. They realised that this was no ordinary case of encephalitis but something more potent. While Sabith’s blood and fluid samples were never taken, health officials, realising the gravity of the situation, immediately retrieved Salih’s samples and sent it for testing to the National Institute of Virology in Pune. It promptly came back positive for Nipah virus (NiV), a rare zoonosis that has been reported only twice in India, both in West Bengal. It is considered to be highly-infectious, always localised, not air-borne but capable of striking a high mortality rate among the infected.

It is pertinent to note here that Kerala’s health department, though familiar with the H1N1 and the dengue infections which come calling every monsoon, has never battled the NiV virus before. It’s being reported here for the first time. Therefore, the initial perplexities in tackling a strange and unexpected challenge are understandable. But it needs to be stressed that the pace at which they swung into action, aided by the state government, is indeed commendable. The role of microbiologist Dr G Arun Kumar, who heads the Manipal Centre for Virus Research (MCVR), in coordinating with the government and dispelling the doubts of the people on the ground has to be impressed.

Animal Husbandry department and forest officials collect bats from a well of a house after the outbreak of ‘Nipah’ virus, near Perambra in Kozhikode on Monday. (PTI Photo)In Changaroth, where I extensively travelled earlier this week, there were indeed entrenched fears among the locals about how one actually contracts the virus. Scores of men, women, and children were seen walking with plain cloth masks on their faces giving me a feeling as though I had entered a radioactive town. But locals contended that while they lived in extreme fear for several days, the arrival of health department officials along with the team of doctors had swept those fears away. At the local level, the village panchayat conducted scores of ward-level meetings to sanitise the area and build confidence within the community. With viral infections, it is important that people don’t get carried away by rumours and fake news which could jeopardise the whole situation. It was wise of the administration to attend to these concerns at the right time.

Instead of handling the case alone, the state government opted for the wiser choice of requesting the Centre for assistance. A senior team headed by the director of National Centre for Disease Control (NCDC) himself flew down in no time, as the death toll touched three, to evaluate the situation on the ground. The team would go into the affected parts, take samples, speak to locals and hold meetings with the health department to intensify the safety protocols. The government also rightly thought it fit to station two of its ministers – health minister KK Shailaja and labour minister TP Ramakrishnan, also an MLA from Perambra in Kozhikode to intensify its efforts. An aide to the health minister said her future programmes in other districts were cancelled as she chose to remain in Kozhikode to spearhead the efforts.

The role of medical professionals, especially doctors and staff nurses, in dealing with the situation cannot be forgotten. When I walked into the local taluk hospital in Perambra, I could not spot a single patient for it was here that the first victim of the virus was admitted. It lay empty and ghost-like. Hospital authorities told me that till a week ago, there were more than a 100 patients but all except two asked to be discharged fearing contamination. But at the same time, doctors and staff nurses, some in protective suits, stayed alert, willing to treat anyone who came their way. The story of the brave nurse Lini PN, who got infected from Sabith and passed away days later leaving two young children, also shines through at a time of immense grief.

By the time the NiV virus was confirmed, the health infrastructure in the district had been promptly spruced up by setting up isolation wards at the Medical College and the local hospitals. In the days that followed, people who had been in direct contact with the infected were immediately transferred to the isolation wards as they began showing symptoms thus breaking any further chance of spread of infection. Family members of the infected were put on home quarantine, their samples taken and their daily health parameters routinely checked by local officials. “We didn’t allow the virus to proceed in its natural cycle. Otherwise, there would have been a lot more fatalities. We were able to intervene at the right time,” said Dr Arun Kumar. By the time the NiV virus was confirmed, the health infrastructure in the district had been promptly spruced up by setting up isolation wards at the Medical College and the local hospitals. (PTI Photo)Sensing that the medical staff would be vulnerable taking into account the nature of the virus, the health directorate intensified the safety protocol among the doctors and nurses who would have to deal with the patients in the ICU. Onus was also put on the doctors to make the right diagnosis. The courage of the medical professionals, especially those working at the Medical College, has been unparallelled to say the least.

Yes, the 12 casualties as a result of the viral outbreak till Thursday in the state is heartbreaking. But there’s no doubt that the situation could have gone much worse if not for the admirable and coordinated manner in which the State and the Centre worked together to contain the crisis. It also speaks highly of Kerala’s well-oiled health machinery, especially at the grassroot level, where medical staff at local hospitals and clinics braved fear to conduct their duties. In any other state, the effects of a similar NiV infection could have taken a lot more lives and have devastating repercussions.

While the report appreciates the co-ordinated response of the Kerala and Union governments in dealing with this outbreak, it fails to highlight another important point: the highly decentralised nature of Kerala’s public health systems. In fact, in a study we completed last year on Public Health Expenditure in India (2005 – 2015), Kerala stood out in devolution of implementation functions in healthcare to its urban and rural local governments.

The differentiating feature is:

Unlike most other states, Kerala also does not provide much by the way of specific purpose transfers to panchayats and Municipal Councils in health. Instead, Kerala gives large amounts of general purpose transfers to local bodies (nearly 25 percent of the plan expenditures), some of which can be used for health and other expenditures. The local governments then decide how these funds should be allocated. Kerala also has an “Information Knowledge Mission” dedicated to running a system of accounts and payments for all local bodies in Kerala. They maintain a database that can disaggregate local body expenditures in health, water & sanitation and other sectors [Public Expenditure on Health in India: 2005-06 to 2014-15, Pavan Srinath et al].

Well-settled decentralised form of health administration had a big role to play in containing the outbreak. The empowered local governments were able to move quickly, without having to wait for explicit directives from the higher levels of government.