How many know that a Muslim woman designed the Indian National flag ? 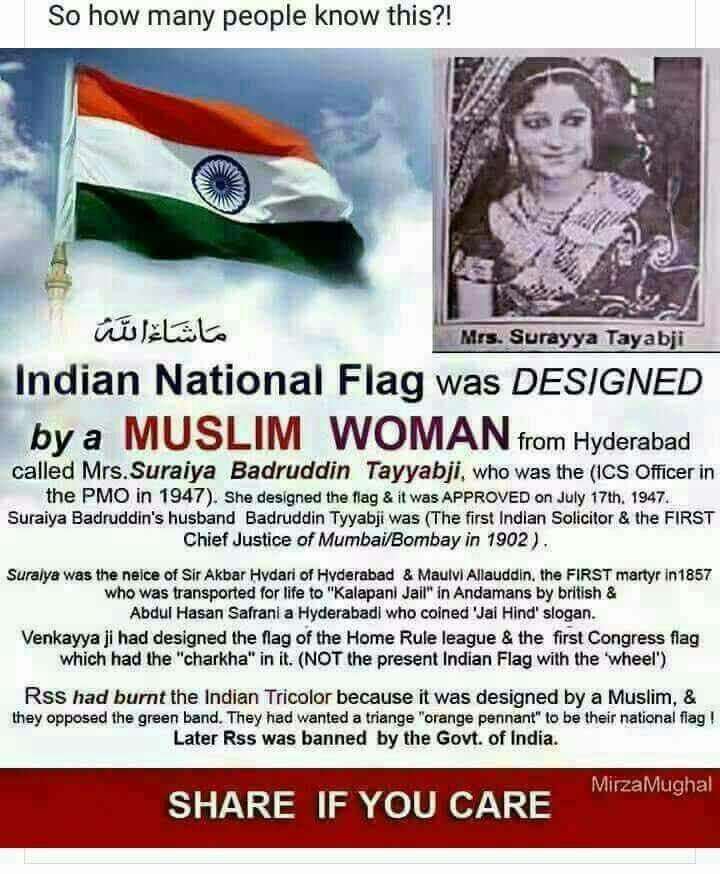 A study by Capt. L. Panduranga Reddy recently substantiated claims that while the current Indian National Flag evolved over several decades of the independence movement, it was a woman from Hyderabad who gave us the final tricoloured beauty that we call our flag. Surayya Tayyabji made the remarkable and incredible contribution that gave us our flag as we know it today.

To begin with, the Home Rule League movement by Bal Gangadhar Tilak and Annie Beasant merged with the Congress who added a charkha to their flag. It is at a meeting in 1921, that Venkaiah is supposed to have presented the tricolour inspired from Lala Hansraj and Mahatma Gandhi’s ideas. However, there is no mention of this in accounts of meetings within the Congress or in the contemporary newspapers of the period – both vernacular and English.

Meanwhile, erudite English historian Trevor Royle revealed in his book The Last Days of the Raj that the final National Flag was made by Surayya Tayyabji – wife of Badruddin Tayyabji – an ICS officer in Prime Minister’s office in 1947 and niece of Sir Akbar Hydari of Hyderabad. According to Royle, the flag was designed and approved on July 17, 1947.

He wrote: “By one of those contradictions which run through India’s history, the national flag was designed by a Muslim, Badr-ud-Din Tyabji. Originally the tricolour was to have contained the spinning-wheel symbol ( charkha ) used by Gandhi but this was a party symbol, which Tyabji thought might strike the wrong note. After much persuasion Gandhi agreed to the wheel because the Emperor Ashoka was venerated by Hindu and Muslim alike. The flag which flew on Nehru’s car that night had been specially made by Tyabji’s wife.”

Surayya is the reason that saffron, white and green fill us with patriotic admiration and it is high time we gave her what she’s due – our deepest gratitude and appreciation

India - No Country For The Disabled
Gautam Adani loses more money this week than anyone else in the world
‘When I close my eyes, I see Faisal’s body on the steering wheel of the car’
India - The Return of Untouchability, Uncriticised and Unquestioned