How mutton soup did in killer wife & paramour in Hyderabad- #Aadhaar for Forensics ?

HYDERABAD: It was the mutton soup that gave away the crime. Taking their cue from Telugu movie ‘Evadu’ in which actor Allu Arjun undergoes plastic surgery to resemble another character in the film played by Ram Charan Tej (which itself is a spinoff of Hollywood film ‘Face Off’), a 27-year-old married woman along with her alleged paramour killed her husband. Later, she threw acid on her paramour with the aim of passing him off as her husband so that they can live happily ever after. However, that was not to be. When the paramour was served mutton soup at the hospital and he refused to eat it saying he was a vegetarian, the dead husband’s family saw something amiss, as their son was non-vegetarian. And in no time, the crime came to light. 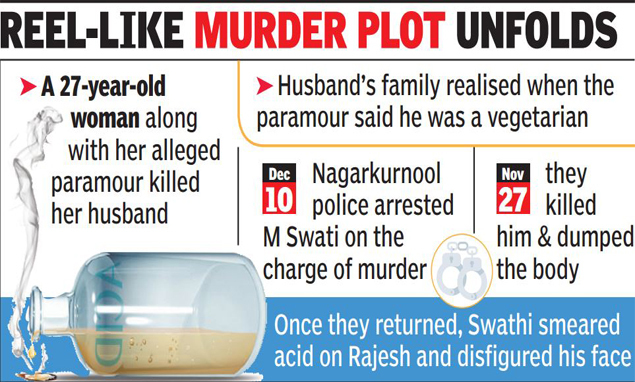 Nagarkurnool police on December 10 arrested M Swati, 27, on the charge of killing her husband M Sudhakar Reddy with the help of her paramour, Rajesh, a physiotherapist. As the murder plot unfolded, on November 27, when Sudhakar was in sleep, Rajesh and Swathi gave him an anaesthetic injection following which he lost consciousness. Later, they killed him with an iron rod and dumped the body in the forest. After they returned home, Swathi smeared acid on Rajesh and disfigured his face. Later, she called up her relatives and told them unidentified persons entered the house and threw petrol on her husband. Subsequently, an ‘injured Rajesh, who was pretending as Sudhakar, was shifted to Apollo Hospitals in Hyderabad.

Police said Sudhakar was a non-vegetarian and used to like mutton soup, while Rajesh, the paramour of Swati, is a vegetarian. When nurses at the hospital offered him mutton soup, Rajesh for better healing, refused to consume it, saying he was a vegetarian. This immediately alerted the family members of Sudhakar that he was not their son. Police then tested the fingerprints of the accused and checked with the Aadhaar database and found they did not match. The game of the wife and paramour was then up.

Nagarkurnool deputy superintendent of police A Lakshmi Narayana told TOI, “We are yet to arrest Rajesh in the case as he is undergoing treatment at the hospital. We have already arrested Swati. How we identified the accused would be revealed while filing documents in the court. The family grew suspicious about him due to various habits and behaviour of the person undergoing treatment. Besides, he was also not able to give details about his family members.”https://timesofindia.indiatimes.com/city/hyderabad/mutton-soup-burns-lovers-acid-plot-unravels-swap-of-identity/articleshow/62046096.cms

#India - Why Muslims should confront the Indian Mujahideen
A Song of Protest from Northeast - #India, Your Constitution Has Nothing for Me #AFSPA
Modi says Maharashtra mein Andhera hai aur Gujarat mein Ujaala!
Retd Lieutenant General HS Panag abused by Modi supporters, want him to be kicked, beaten up and hum...