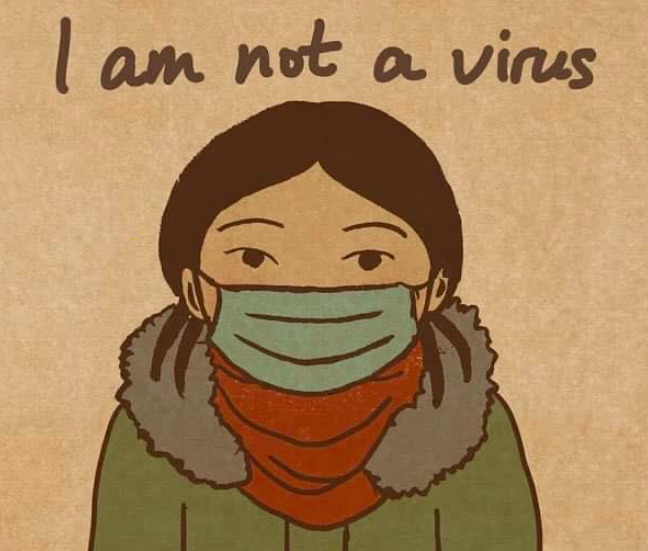 In the year 2020, as the inevitable pandemic begins to take over our lives, an increased number of cases of racism against Asians or mongoloid looking individuals were reported around the world. There is no doubt that the outbreak of Covid-19 has been highly racialized merely based on the fact that it has its origin in China. India is not new to the instances of racial discrimination faced by the people of North East and the country has been fighting with this social issue since a decade or so. With “mainland” India being quite ignorant about the north eastern part of their own country, casual racism at public spaces is so normalised that people do not realise the harm they cause to the victims of racism. The primary reason behind such overt racial discrimination is the nonrecognition or misrecognition of Northeast Indians as Indians. The “othering” of North East comes from profiling individuals with mongoloid features as “non-Indian” or more recently as “unwanted Indians”.

For the people of North East living in other parts of India, the pandemic has not just been about fighting with the virus but also coping with racial attacks on them. For instance, in March 2020, a man allegedly spat on a Manipuri woman in Delhi and made a racial remark on her.

Image description : A woman from Manipur was spat on by a man

In the same year around the month of May, another woman from North East was brutally attacked and allegedly called ‘corona’ by some locals in Gurugram, Haryana. These were majorly a racially motivated crime and due to the absence of any firm laws against anti-racist crimes has possibly resulted in these blatant acts of racism especially during the pandemic. Sadly, the number of such incidents doesn’t quite stop there. Similar cases of racism were reported in Karnataka and West Bengal, in the last year itself.

It doesn’t come as a surprise that almost everyone who belongs to the Mongoloid race has been a victim of casual racism at some point in their life and their voices often go unheard. As someone from North East India and being a victim of casual racism myself, I have often come across comments like “chinky”, “Chinese”, “Nepali” or “can you even see with your small eyes?”. I have friends who faced racial slurs like “momos” or “chow chow”, which are mainly East Asian cuisines. In one of the conversations on this social problem with my brother, he recalled an instance where he was leaving for his home from Mumbai before the national lockdown was announced last year, when his cab driver asked him whether he’s going back to his home in China. These cases of “casual” racism have led to systemic racism and institutionalised validation of such practices.

Even after the brutal murder of Nido Tania of Arunachal Pradesh by local shopkeepers in the  year 2014 in Lajpat Nagar, Delhi and several other acts of racism, racial discrimination and violence including torture, India has nevertheless failed to criminalise racial offences.

If we look at racism through a gendered lens, north eastern women are doubly prejudiced and often branded off  as “easy” and hence, this way become a victim of sexual abuse as well. For example in the case of Reingamphi, who was a young woman from Manipur, suspected to have been brutally murdered and raped by her landlord’s brother-in-law at her rented house in Chirag Delhi. This was just one example from many such cases which are usually brushed off as individual cases completely ignoring the elements of racism and misogyny underlying it.

In May 2021, a YouTuber called Paras Singh started an angry rant against Arunachal Pradesh MLA Ninong Ering on his intention of banning a video game. However, this rant soon turned racial where the YouTuber goes on to call Arunachal Pradesh a part of China and jokes about Ering’s physical appearance. Following this, he faced a major backlash and after being called out, Paras made an apology video titled ‘Sorry Arunachal Pradesh’ where he says :

(I made a mistake, what more should I do, hang myself?)

His apology appears to be very vague because he seems to be playing the victim card in front of the victims of decade long racism in India. Someone with a huge followers of more than 3.5 lakhs on YouTube, has the capacity to influence or misdirect his audience by passing racist remarks on an individual causing more harm to the already marginalized community.

While legal action has been taken against the YouTuber and many government officials have spoken about the issue, unfortunately for the ones who are not part of any leading political parties, there seems to be no respite. Their calls for help get short-lived media attention.

After Paras Singh was arrested by the Arunachal Pradesh Police, they also taught him lessons on history, geography, culture and tradition of Arunachali people while in police custody.

The racial slurs directed towards the people of North East by the mainlanders is primarily due to the lack of knowledge of different cultures and heritages of North East India. Therefore, many student organisations from the northeast have collaborated to organise a “Twitter storm” demanding that the history and culture of the northeast be made a part of the National Council of Educational Research and Training (NCERT) curriculum.

Although several ministers and well known activists from NE, in the past years, did suggest bills or provisions to introduce a lesson on the culture of North East Region (NER) to be included in NCERT textbooks, in the parliament , the matter has however been often ignored by the Indian Government.

Identifying the main root of the problem, thus becomes necessary.  Just including a chapter on the culture of NER in a NCERT book sounds to be more of a mere tokenism than a solution to the end of this never ending issue. It is very essential to understand the problem of universalisation and homogenisation of NER. It is definitely not “one” identity. The NER encompasses multiple tribal communities within one region, with one community’s history and culture different from the others, resulting in conflict of interests within the state. Thus, the racism discourse affects communities from the North East disproportionately. Any racial discrimination is only against those with mongoloid features and those who does not look “chinky” or “chinese”, they are evidently safe from the racial slurs or attacks even if they are from the NER. Racism against the communities of Mongoloid descent arises out of the power relationship of  exploitation between the NER and mainland India.

In order to end racism, one shouldn’t view this issue as something to be more inclusive; rather it is important to dismantle the imbalanced power relationship that exists in the system.

Racism needs to stop but we do need to realize that it is going to be a long battle to end the racism discourse in India.

Europa is an art enthusiast, an occasional reader, a musicophile and in her head, she’s living in the 60’s in a faraway land mostly chilling with Janis Joplin and Bob Dylan. Currently, doing her Master’s in Gender Studies from Ambedkar University Delhi. She is engrossed in the issues faced by the marginalised communities and determined to voice up against social injustices. Presently she is interning with kractivist.org