How Rohith Vemula’s Mother Radhika Transformed Her Grief Into Resistance 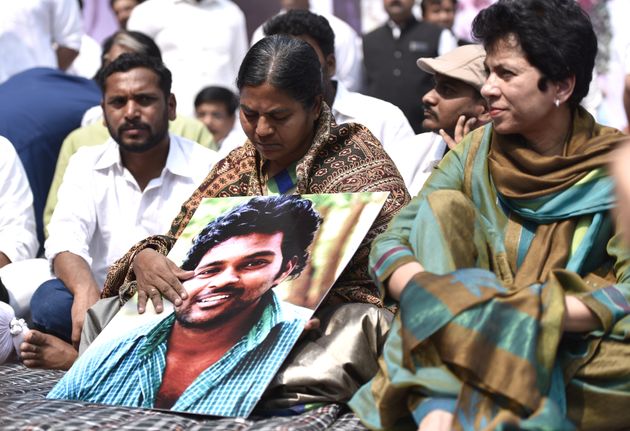 Four years after her son’s death, as India’s university students across the country rise up once more, Radhika Vemula has become a symbol of inspiration and resistance.

HYDERABAD, Telangana — On 23 January 2016, Radhika Vemula was at Velivada, a bustling protest spot in University of Hyderabad. A week ago, her son Rohith Vemula had died by suicide after he and four other Dalit scholars at the University of Hyderabad were expelled from their hostels, barred from gathering at public places and contesting elections, after a confrontation with the Akhil Bharatiya Vidyarthi Parishad, the student organisation affiliated to the ruling Bharatiya Janata Party (BJP).

“My birth is my fatal accident,” Rohith, who was Dalit, had written in his suicide note. His death sparked a nationwide students’ agitation, and a much-needed conversation about caste discrimination in India’s educational institutes and the BJP’s frontal assault on their intellectual autonomy.

That day in 2016, when Radhika Vemula stood before a phalanx of assembled cameras, she was initially at a loss for words. Her son was dead, but rather than offer solace and promise an investigation, the BJP’s Smriti Irani, who was the Minister for Human Resource Development at the time, questioned whether Rohith was even Dalit. Bandaru Dattatreya, Union Labour Minister at the time, had put pressure on the University administration to take action against Rohith.

“I am a Mala. I brought up my children in a Mala village,” Vemula said, referring to a Dalit caste from Andhra Pradesh. “Rohith lived and died a Dalit.”

“She was taken aback as the campaign maligned her intentions and that of her son’s,” said Prof. K Laxminarayana, who was the president of University of Hyderabad Teachers’ Association in 2016. “She was distraught.”

Now, four years after her son’s death, as India’s university students across the country rise up once more to oppose police brutality on campuses and the BJP’s divisive Citizenship Amendment Act, Vemula has transformed into a symbol of inspiration and resistance.

“Radhika Vemula and Fatima Nafis symbolise what this regime has done to this country,” said Umar Khalid, a former student at Jawaharlal Nehru University, who was briefly jailed under charges of sedition soon after Rohith’s death. “This regime has transformed ordinary people into phenomenal fighters who are inspiring a new generation.”

Fathima Nafees is the mother of Najeeb Ahmed, a 27-year-old JNU student who went missing after a scuffle with ABVP students in October 2016.

“Radhika Vemula and Fatima Nafees often say they draw their strength from young people,” said Khalid, who now frequently addresses gatherings across the country as part of United Against Hate. “But it is the other way around, we draw our strength from them.”

‘On that day, I will resurrect’

A single mother who had to drop out of school in Class 10, Radhika Vemula worked as a tailor in Prakash Nagar in AP’s Guntur district to bring up her three children — Rohith, Raja and Nileema. The Vemula family lived with Anjani Devi, Radhika’s adoptive mother who had offered them shelter in exchange for household labour.

As she cooked, cleaned and sewed, Vemula also tried to finish her schooling.

“She used to study with us. Rohith and I used to encourage her,” said Raja Vemula, who has since become a geologist.  She also keenly followed Rohith’s struggles at the University of Hyderabad.

“Rohith used to appraise her of what he was undergoing on campus,” said Laxminarayana, the former teachers’ representative. “As a person who has faced discrimination all her life at the hands of family, husband and society, she may have understood him even though he had not realised it at the moment.”

As a consequence, Vemula was quick to understand the working of the university administration in the week following Rohith’s demise. A faculty member who did not want to be named said, “She used to observe each happening closely and ask whenever she failed to understand a university rule. She was keen on understanding the university system and it helped her address and oppose caste discrimination within the ambit of the university”. The students who surrounded her and the teachers who stood up to the Union government soon became her strength.

Radhika Vemula and Fatima Nafees often say they draw their strength from young people. But it is the other way around, we draw our strength from themUmar Khalid, activist

In April 2016, three months after Rohith’s death, Vemula and her younger son Raja became Buddhists. She started to read the writings of Dr. B.R. Ambedkar and the writings of other anti-caste campaigners.

“She had not read Dr. B R. Ambedkar’s teachings earlier,” Raja said, adding that his mother began reading up on all the prominent names she heard in protest meetings.

Prakash Ambedkar, leader of Vanchit Bahujan Aghadi and grandson of Dr. B. R. Ambedkar, said that Ambedkarite politics helped Vemula cope with the loss of her son.

“She had by then realised that she will not have peace with herself unless she gets out of the ambit of Hinduism,” Ambedkar said. Navayana Buddhism, Ambedkar said, “gave her a new identity and she badly needed it as the BJP was accusing her of faking her Dalit identity in an attempt to divert attention from the backlash of Rohith’s suicide.”

The act of conversion unto itself gave her a community and a will to fight.

A humane woman of principle

As she immersed herself in the fight against caste discrimination, Vemula began to address protest meetings across the country. In her speeches, she accused the BJP and its handpicked university administrators of turning India’s diverse universities into “Agraharams”, a term for exclusively Brahmin neighbourhoods often settled on temple lands.

India’s savarna-caste public, she often said, were implicated in a system that had claimed the life of her son and others like him.

“They are pretending to be asleep. When they really wake up they will realise that they too have a hand in such deaths,” she said at a protest meeting held in Hyderabad in 2017.

She first turned down an ex-gratia of Rs. 8 lakh which University of Hyderabad had offered her in 2016. “I want justice and not their money,” she said during the first death anniversary of Rohith held in the university in January 2017.

For two years, Vemula refused to take the money even as Raja Vemula was forced to make a living driving a goods auto rickshaw. When the family finally accepted the money in 2018, Vemula made clear that her silence couldn’t be bought.

“She never toned down her criticism of the Union government or the university administration,” said a faculty member at the University of Hyderabad.

In her speeches over the years, Radhika Vemula has consistently urged students to forge a unity of “oppressed people”—Dalits, Bahujan, Adivasi and Muslim.

“Her conviction put to shame the vain promises and rhetoric of most political leaders. Her vision for the country’s future in terms of electoral alliances was also akin to a model adopted by leaders like Prakash Ambedkar,” said Prof. Laxminarayana, referring to Ambedkar’s Vanchit Bahujan Aghadi, a coalition of politically marginalised communities.

For a younger generation of students, especially Dalit women in educational institutions including University of Hyderabad, Radhika Vemula is a symbol of resilience: a mother who, despite losing her son, seldom bats for apolitical campuses.

“I studied in a campus where neither protests nor discussions took place. It is after reaching University of Hyderabad that I heard of Rohith Vemula and his mother Radhika Vemula,” said J. Kalaivani, a student who joined University of Hyderabad in 2019. “Their life journeys have inspired me to join a student outfit, Ambedkar Students’ Association, which battles casteism”.

Through her struggle, Vemula has never let go of her humanity. In May 2018, Union Minister Dattatreya, who had pushed the Hyderabad University administration to harass Rohith shortly before his death, lost his 21-year-old son to a cardiac arrest. In a video which went viral on social media, Vemula asked her supporters not to be vengeful and offered her condolences to the minister; a courtesy Dattatreya had not offered her.

On Friday, Radhika Vemula will speak at University of Hyderabad to commemorate Rohith’s fourth death anniversary. Abeda, mother of Dr. Payal Tadvi, who ended her life due to alleged caste discrimination in BYL Nair Hospital in Mumbai, is expected to join her on the day.

Were vaccines held back for ‘record’ vaccination on PM’s birthday?
JTSA in solidarity with artists and poets of Kabir Kala Manch
Stripping Gaza- #Poem #GazaUnderAttack
#SaveLakshadweep: Familiarise Yourselves with the Islands of Lakshadweep