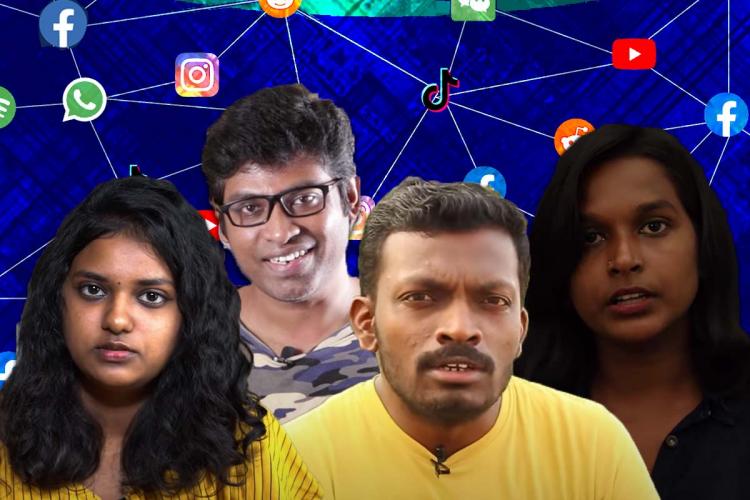 The democratisation of the internet has enabled anti-caste and/or feminist voices from oppressed communities, who were earlier denied a platform, to express their political, social and cultural opinions.

Director Shankar’s debut film Gentleman, released in 1993, was a roaring success at the box-office. The film laid the foundation to Shankar’s career as a hugely popular filmmaker in south India, known for his extravagant style of filmmaking.  However, Dalit academicians like Raj Gauthaman, D Ravikumar etc., saw through the film’s problematic politics, and when there was a movement for Dalit criticism, they documented it too. Academician and author Stalin Rajangam says that the Dalit literary movement was gathering momentum in the 1990s. But this criticism largely remained in the academic realm, which was inaccessible to the vast majority.

Decades later, Gentleman is now one of the most heavily criticised movies in Shankar’s filmography, thanks to YouTubers and social media influencers from disadvantaged groups, who with their ubiquitous presence, have ensured that they amplify the criticism against the anti-reservation politics of the film. They have also exposed the casteist undertones in it through their videos and posts. And now, their followers are keenly looking forward to the director’s upcoming film Indian-2, to further understand the politics of the filmmaker and scrutinise it. Indian 2 is the sequel to Indian, which is a story about a nationalistic vigilante who doesn’t tolerate corruption and ruthlessly eliminates corrupt government officials — a common trope in Shankar’s films.

This has become possible because of the democratisation enabled by the internet which has brought in critical voices from oppressed communities. These are people who were earlier denied a platform to express their political, social and cultural opinions from an anti-caste and/or feminist perspective. This sudden transition in the social media ecosystem has made it inevitable for users to take note of their criticism and reflect on it. Among these critical voices in Tamil Nadu, some of the progressive content creators who confront and challenge the Brahminical hegemony include Neelam Social, Fake ID, U2 Brutus, and Second Show among others.

Chennai-based journalist Kavitha Muralidharan attributes this phenomenon to the social justice movement in Tamil Nadu which began over a century ago. This movement created a clear distinction between Brahmins and non-Brahmins and ensured that the non-Brahmins were empowered both politically and in administration. It was in 1921 that the Justice Party issued a Government Order to increase the proportion of posts held by non-Brahmins which included Indian Christians, Muslims and Adi-Dravidars in the Provincial Services, including the Madras Secretariat, and paved the way for social justice.

Explaining how non-Brahmin as an identity in Tamil Nadu was normalised, social scientist MSS Pandian in his book Brahmin & Non-Brahmin writes: “The phase of uncertainty about non-Brahmin identity has now indubitably passed. Anyone acquainted with the politics of contemporary Tamil Nadu, this post-Independence state carved out of Madras Presidency in 1957, will know that the categories Brahmin and non-Brahmin  possess a normal presence in the region and have in fact reconfigured the landscape of political possibilities and constraints.”

“The reason we have so many politically conscious people from marginalised communities making critical commentary against Brahminical films or films which are problematic in their depiction of women and other vulnerable communities is because of Periyar,” says Gurubaai, a YouTuber. Gurubaai runs a YouTube channel in his own name. He is also part of another Tamil YouTube channel Plip Plip, which is popular among youngsters for their ‘roast’ videos. These videos contain explicit language.

“The beauty of internet democratisation is that anyone can start a YouTube channel and share their opinions. It is a great thing that everyone has a pen in their hands and is provided with an opportunity to express their views,” Gurubaai says.

“The comedy made by veteran comedian Goundamani has many problematic things which include slut shaming, body shaming etc. But I don’t know how many people had the opportunity to write condemning these. Now that everyone is able to point out these problems, we are able to evolve and take part in the progressive movement,” he adds.

Giving an example of this, Gurubaai cites the case of people calling out comedian turned actor Santhanam’s recently released Dikkiloona, where he slut shames the female lead for her clothes and preaches about how women should exercise ‘freedom’. “Since everyone is calling it out, there is a change in the opinion of the public at large.”

Gurubaai also says that the reception to content is based on the comic element in the content. “When I share my opinions on the Gurubaai channel, the reception is very limited, whereas our videos in the Plip Plip channel generate a lot of content. Other meme creators and troll video creators use our content and amplify our videos.”

Another popular voice who makes critical commentary on films, politics and other educational topics is YouTuber Aravind Anbalagan. Aravind is an assistant professor, teaching Visual Communication in Chennai. However, his interest in promoting rationalism and reasoning amongst students pushed him to run a YouTube channel and lead by example, he discloses.

“I believe that a teacher’s responsibility is not just to teach what is in their curriculum. To nurture leadership qualities and bring in the perspective of equality in them, rather than teaching about it in a classroom, I encouraged them to perform street theatre. This led to me collaborating with my students to make short films and then eventually YouTube videos. Originally the idea was to work together with my students, but the COVID-19 enforced lockdown forced me to work in isolation,” Aravind recalls.

Crediting the Dravidian movement for his reasoning and rationalism, Aravind says that directors like Pa Ranjith and Vetrimaaran have been a great influence through films to destroy regressive stereotypes.

“Unlike other mediums, films have now reached the oppressed communities. The emergence of directors like Ranjith and Vetrimaaran has helped in dismantling several regressive ideas in films. I myself have enjoyed Goundamani and Santhanam’s body-shaming comedies earlier, but after these directors came into the field, we have evolved. Today, even Goundamani would not make comedies which are insensitive towards some people because the audience has evolved,” he says.

Though expressing disappointment over some toxic content created by some internet influencers who shame women by referring to them as ‘aunties’, Aravind says that the internet has largely “liberated” people. “Some people in Tamil Nadu have been using it as a tool reasonably and with responsibility. I hope everyone does the same.”

Talking about the collective resistance of these progressive voices, Aravind shares,  “YouTube channels like Plip Plip, U2 Brutus and I work as a forum, and this is because of the Dravidian movement.” For their criticism, they are often threatened with copyright infringement, says Aravind. “To save their reputation, some people often send us strike notices, claiming that they own the copyright for the content. Though we use a small portion of their content to show their intent, they send us a strike notice. In actuality, this would come under fair use, but YouTube does not decide whether it comes under fair use or not. It has to be resolved in court. Using this, they exploit the policy to remove our videos,” Aravind says.

These channels have confronted and fiercely questioned the representation of Dalits in the spheres of stand-up comedy. Earlier in May this year, Evam Stand-Up Tamasha, a comedy stand-up company, acknowledged that caste does play a role in who gets the opportunity to perform, but denied any caste-based discrimination in its process of hiring talents. This was after Evam was called out for having mostly Brahmins and other upper castes in their group. But in 2019 itself, a YouTube channel Temple Monkeys, also known for provocative language, made fun of this fact. Similarly, when a YouTube channel called Eruma Saani made an extremely offensive video mocking Dalit youngsters from North Chennai for their appearance and lifestyle, a collective condemnation from these groups forced the channel to delete the video.

Sneha Belcin, content creator and talent at Neelam Social, says, “It was in 2014 that I started noticing that YouTube has become a medium for consuming content. When I look back now, I understand it was dominated by upper caste men and it has taken a period of time to break that pattern and create a space for Dalits. At this time, the Tamil YouTube scene dominated by upper castes produced ‘apolitical’ content. The upper castes have the privilege of being apolitical, but Dalits cannot remain apolitical. I believe that politics is tied to our everyday life, we cannot avoid it.”

For her overt stance against sexism and casteism, political parties espousing casteist views or which tacitly endorse caste supremacy, Sneha says that she constantly gets threats from casteists on the internet. “Initially I would go soft, but I no longer fear them. Even if they launch a coordinated attack and harass me with a torrent of slut shaming remarks in the comments section, I look at the positive side of it as it helps the YouTube algorithm of our channel,” Sneha says nonchalantly.

Neelam is perhaps the only YouTube channel which is mostly run by women. “Neelam Social having a 75% women workforce is a conscious decision made by the Creative Lead Prashant Ramasamy and I,” Sneha says.

Explaining the challenges of being a woman speaking anti-caste politics, she says, “Many women would have come forward and taken up the internet space, but since they do not enjoy male privilege, they show reluctance. Even my mother often worries about me, fearing that I will be booked by the police.”

The warm reception to this content produced in a non-mainstream space extends to journalism as well, observes Kavitha. “YouTube channels like Tamil Kelvi run by independent journalist Senthil Vel,  Liberty Tamil by journalist Jeeva Sagaptham, Aransei by journalist Haseef Mohamed have a great following with a significant number of subscribers. Since they do not work for a large corporate TV network, they are under no political pressure, allowing them to produce brilliant, meaningful content.”

“The corporate TV networks do not understand Tamil Nadu as a result of which there is a slight decline in their consumption. The content produced by these independent journalists is in tune with what Tamil Nadu wants to listen and resonate with,” she asserts.

#Chhattisgarh- Many Monkies on our Back... #Vaw
India - #Aadhaar- Judgement will tell if our jurisprudence is fit for an age of technology
India - Writing ‘Lal Salam,’ ‘Comrade’ on Facebook, sharing Lenin’s photo will put you behind bars u...
The Decline Of Urdu In UP's Literary World