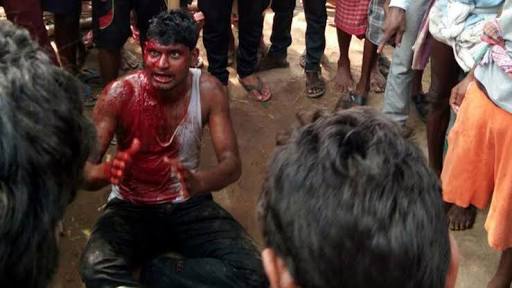 The Sangh Parivar excels in camouflaging. The ruling dispensation basically thrives upon promoting intolerance emanating out of exploiting identity based societal fault lines. The mandate it won in 2014 was a vote for the chimera of ‘development’ and aspirational pandering rather than identity based mobilization. After winning the elections that their agenda of divisive intolerance has gained deliberate prominence, though under characteristic subterfuge.

Hands folded, blood-soaked body- Pictures of a man begging for life capture brutality of Jharkhand lynching is being circulated on Social Media now. Earlier the same medium was used to target and kill these people by circulating rumours on Whats App.

The Bharatiya Janata Party is a WhatsApp driven Government. It thrives on people’s emotions and vulnerabilities and uses them to target groups who have a diametrically opposite opinion to what it preaches. Rumour mongering and targeting ideologically opposite people by spreading canards and falsehood has become the modus operandi of the BJP.

Rumour mongering and targeting ideologically opposite people by spreading canards and falsehood has become the modus operandi of the BJP.

The police and the authorities abet such horrific incidences of mob justice by remaining a mute spectator. Law and Order has become the biggest causality in BJP ruled states. Mob justice, lynching, vigilante groups thrive. This is actively abetted by the State. In fact, in both the incidents which took place in Jharkhand- Police was present and overlooking the entire incident when mobs took law into their hands – killing 7 people. It does not matter whether they were Hindus and Muslims. Both were killed, both were not given any opportunity to speak and in both cases Police was outnumbered by the mob. Not even their 80 year old grandmother was also not spared, and badly beaten by the mob claiming that their targets were child lifters.

This has not happened for the first time. Numerous incidents of ‘mob justice’ have taken place in BJP ruled states. Vigilantism is fast becoming the order of the day, with mobs being used by the right wing to strike terror in the states. The Bharatiya Janata Party which has a habit of lecturing other states and branding them as ‘Jungle Raj’ should first elucidate the following:-

15 days later, on May 5, Dalits and Thakurs had clashed in Shabbirpur, which led to the death of an upper caste man. 20 people were injured and 25 homes were torched. Still there is fragile calm in Sharanpur, and the Adityanath Govt has miserably failed to maintain law and order. Why?

Is this the ‘New India’?

Such incidents where mob kill and lynch with impunity have occurred in every BJP ruled state. Rumours are spread by vested interests to mobilise mobs who then are encouraged to attack their ‘targets’ with a state aided ‘license to kill’. The Prime Minister, Narendra Modi talks about ‘New India’- Is this the ‘New India’ which his party wants to create where ruthless mobs take law in their own hands and hapless people are lynched and beaten to death?

Is this the ‘New India’ which the BJP wants to propagate where Intolerance and Majoritarianism breeds?

Few instances of the essentially generic Un- Indian ideas of the Sangh Parivar ever since Shri Modi and the BJP came to power.

1) Eminent Social Activists-Dabholkar, Pansare and MM Kalburgi are shot dead in cold blood by fanatics. The Prime Minster has nothing to say.

3) Rohith Vemula, was an example and a victim of this bigotry as also intolerant attitude/undue pressure exerted by the HRD Ministry to harass a student so much that he ended his life. Two union ministers intervened and four letters were written to unleash the fury of a vindictive Government on helpless dalit students, just on a matter of an altercation of students with ABVP leaders.

4) Modi Government inherited two Ordinances from the previous Congress-led UPA government — The Securities Laws (Amendment) Ordinance, 2014 and The Scheduled Castes and Scheduled Tribes (Prevention of Atrocities) Amendment Ordinance, 2014. While the BJP Government converted the Securities Ordinance into an Act of Parliament (12 August 2014), the Ordinance intended to strengthen the machinery to prevent atrocities against SCs and STs was allowed to lapse despite strong protests by the Opposition. The amendments were finally passed after Congress President wrote a letter to the Prime Minister urging him to bring the amended act to the Parliament for passage.

However, the amended PoA Act has been rendered in-fructuous due to lack of institutional support such as Exclusive Special Courts and Special Public Prosecutors to exclusively try the offences under the PoA Act to enable speedy and expeditious disposal of cases.

Insurmountable Rise in Atrocities against Dalits

Atrocities against SCs increased by 38% under BJP Government at the Centre, from 39,408 cases in 2013 to 54,355 cases in 2015 (Source: NCRB Data). Two BJP ruled states of Rajasthan and Madhya Pradesh were among the top four states accounting for highest crime against Dalits.

The cow Vigilante brigade of Sangh Parivar has made the matters worse for the Dalit community. Incidents in Una, Latehar, Jammu, Delhi and Saharanpur are a timely reminder. What does Shri Modi’s silence on these issues indicate?

Asian countries act to get cheap drugs #rightohealth
Mumbai: TISS students say professor 'sacked abruptly' for political leanings
I was sexually abused as a child. I don’t want a #DeathPenalty, I prefer healing for him #Vaw #musts...
Justice J. Chelameswar- ‘I Kept Speaking While Others Didn't’