How Will Kerala Be Affected by the Koodankulam Project?

When the people in and around the southern tip of Tamil Nadu rose up against the Koodankulam nuclear power project, people all over Kerala from all walks of life extended their wholehearted support to the struggle. The people of Kerala know very well that our fisherfolks’ right to life and livelihood, our people’s food and nutrition security, our state economy, the entire Malayali community’s overall well-being, especially the interests of our future generations, will be drastically affected.

However, the government of India and the government of Tamil Nadu have chosen to ignore the valiant struggle that is being supported by 8 crores of Tamils and 4 crores of Malayalis. In fact, the governments are pressing ahead with their plan of setting up four to six more nuclear power plants, a reprocessing plant and other assorted installations at the Koodankulam site.

Setting up a sprawling mega power plant complex (euphemistically called, “power park”) in our midst is beset with many dangers and massive problems. For instance, when the reactors in Fukushima Daiichi “power park” exploded one after the other, the Japanese authorities extended the evacuation zone to 20 kms and people even beyond that point fled to save their lives. People in Tokyo, some 150 kms away from Fukushima, faced radiation threats and severe anxiety.

Another “power park” exploded at Chernobyl in 1986. The world is going to commemorate the 30th anniversary of the deadly nuclear power plant accident on April 26, 2016. Fukushima, Chernobyl and Three Mile Island accidents prove to us that “power parks” are neither safe nor acceptable. When the radioactive fall-out from Chernobyl is still troubling much of Europe even today and the Fukushima radiation ended up in California crossing the vast Pacific Ocean, any untoward incident at Koodankulam will not spare Kerala. 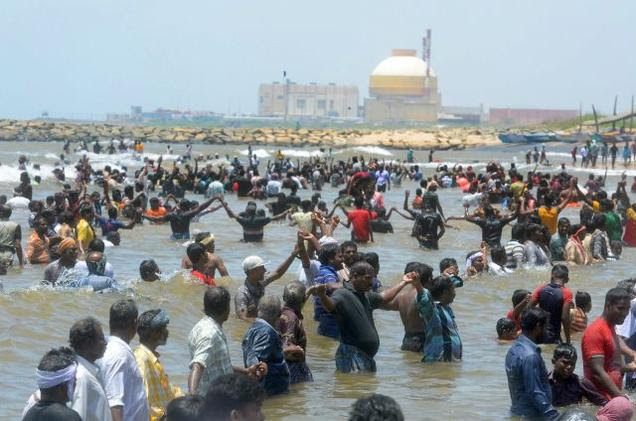 When a catastrophic tsunami hit our area on December 26, 2004, the Koodankulam authorities claimed that “[w]hen the design was taken up in the early 1990s and the Detailed Project Report was prepared, Chapter 2.1.2.2…has taken into account the possibilities of a tsunami strike” (The Hindu, January 12, 2005). This kind of complacent and dismissive attitude toward the local people’s right to life and livelihood is very troubling indeed.

Impact on Fish and Fisherfolks

As far back as in October 2006, the Kerala Matsya Thozhilali Federation said the Koodankulam project would have a devastating effect on the Kerala coast. They said: “The commissioning of this project will spell the end of `God’s Own Country’. People in Kerala, right from the Tamil Nadu border to Kochi, will be affected by radioactive waste from the plant. The discharge of hot water with radioactive pollutants into the sea will increase the temperature of the seawater in the coastal areas and drive away or kill fish. The consequent depletion of fish stocks will push fishermen into further poverty and misery”. The federation also said that the social cost of the project would outweigh the benefits in Kerala.

The Koodankulam nuclear power plant will wreck the lives and livelihoods of fisher people in Kerala and southern Tamil Nadu. When the sea water is heated up and contaminated with coolant waters and radioactive effluents, the fish catch will be severely affected and there will not be a market for the contaminated fish. All this will result in increased poverty and misery of the fisher people in Kerala.

With six to eight 1000 MW nuclear power plants, a reprocessing plant, dangerous nuclear waste, and a possible weapons facility (because Koodankulam is far away from Pakistan and China) at the Koodankulam site, we can be sure that tourism in Kerala will dwindle gradually. The sea water and fish will be contaminated, and the air, water, food and everything in Kerala will be polluted. Both Indian and foreign tourists will avoid our sea and sea food and the whole state for fear of radiation exposure.

We all know that Kerala is one of the best tourism centers in the world. Prince Abdulla Ali Ahmed Al-Saihati from the Kingdom of Saudi Arabia said once: “If there is a heaven on Earth, it is Kerala. The pristine beauty and natural resources if complemented with infrastructure facilities would work marvels. I had a backwater cruise. It was so heartening that I feel like reliving the experience yet again.”

The Kerala State government earned a sum of Rs.10,000 crores (US $ 200 crores) during 2006-2007 with a 30% increase over the previous year’s income. There were 67 lakh tourists (domestic tourists 62 lakhs and foreign tourists 5 lakhs) during that year. In fact, people from all over the world come to Kerala seeking indigenous medical treatment in Ayurveda and Sidha. With a dangerous nuclear power complex polluting the sea and the beaches so perilously, tourists will not come to the state that may turn into “Cancer’s Own Country” and the tourism industry will take a severe beating. Any deterioration of tourism in Kerala will affect the overall economy of the state badly.

In case of an accident, or a terrorist attack in Koodankulam, “God’s Own Country” will become “Satan’s Own Country”. Even if such an accident or attack does not happen, the daily intake of radioactive nuclides and low-level radiation will do enough damage to our people in Thiruvananthapuram, Kollam, Pathanamthitta and Alleppey districts and beyond.

The westerly winds with high moisture content that blow in and around the southernmost tip of India will bring high amounts of radioactive nuclides such as Iodine, Cesium, Strontium and Tellurium to our door steps in Kerala. Similarly, the ocean currents near the southernmost tip of India show that waters from the Bay of Bengal shores flow down to the Arabian Sea and vice versa. For instance, during the 2014 Tsunami, scores of dead bodies from Tamil Nadu were washed ashore on the Kerala coast.

It is a regular practice in India to dispose the low-level liquid waste from nuclear power plants into the nearby sea. When a massive amount of low-level liquid waste from the Koodankulam plants is dumped into the sea, and even a greater amount of hot and mildly radioactive coolant sea water is pumped back into the sea all the 24 hours seven days a week throughout a year, we will find ourselves at the receiving end here in Kerala.

It is also important to remember that the southern tip of the country is seismically vulnerable and has experienced quite a few small tremors. There have been series of mild tremors in Kanyakumari and Tirunelveli districts of Tamil Nadu over the past few years. On May 19, 2008, there were mild tremors at Leepuram, Chinna Muttom, Kanyakumari and some 40 other villages in Kanyakumari district and at Koottapuli in Tirunelveli district. All these fishing hamlets are just a few kilometres away from Koodankulam (The Hindu, May 21, 2008). In August 2009, there were tremors in many villages around the Koodankulam nuclear power project. The central and state government authorities are completely silent about these repeated tremors and just brush these reports aside as non-events. Recently, the entire subcontinent has been devastated by earthquakes, tremors and after-shocks. Cyclones, huge monsoon thunderstorms, unrelenting sea erosion and increasing global warming also beleaguer our coast and inland areas.

Uranium fuel rods for the Koodankulam nuclear power plants are being brought through the Thiruvananthapuram airport just like ordinary cargo and it is transported on our roads without giving any warning or even basic safety information to our people. In future, the spent fuel and other high-level nuclear waste will be shunted back and forth on our roads and through our communities. Furthermore, the nuclear authorities have not conducted any safety drills or shared any disaster management plans with the residents of Thiruvananthapuram, Kollam, Pathanamthitta, Alappuzha and other districts in Kerala.

Given this situation, it is high time the people of Kerala, the civil society and the political society in Kerala took a clear stand against the Koodankulam expansion plans and demanded a White Paper on the integrity and safety of the first two units in the Koodankulam nuclear power project in the larger interests of Kerala.

Conversion was not Mother Teresa's focus
Mamata on linking Aadhaar with mobile number: ‘I will not do it’
Vedanta PIL: Centre asked to respond to plea for probe into funding forparties from UK group
Manual Scavenging - Deaths in the drains