How women are building mangrove classrooms on India’s border

In 2012, two women and a sewing machine made a 100-km journey from Kolkata to Hingalganj, an island in the Sundarbans in the lower Ganges delta, 5 km from the Bangladesh border. Today, that journey has resulted in the only English-medium school on the 238 sq. km island, all because one of those two women happened to be a teacher.

Satarupa Mazumder, 46, remembers that day like it was yesterday. Her aunt, who lives in Toronto, had come on her annual visit, and took her along on the three-hour drive to donate a sewing machine to a community of women. They spent all day in the village, but when it was time to leave, a few young girls, having learnt Mazumder’s line of work, pleaded with her: “Didi, kichu korun… aamra kichu korte chai.” (Didi, please do something, we want to make something of our lives.)

Mazumder had observed how the children were just playing around or rolling beedis with their slender fingers for their parents who were beedi workers, doing pretty much “anything except studying”. The reason was not hard to find. The only school the village had was a government school, and it wasn’t functioning. When it did, there were two teachers for 100 children. The kids would go to school only to have their mid-day meal. The mothers asked Mazumder to teach their children anything she could.

At that time, the middle-school teacher was teaching economics at a reputed school in Kolkata. A steady job and a settled life with her husband and their little daughter. And here, in the Sundarbans, were vast swathes of people steeped in poverty, and not one decent school for their children. The ferry from Hasanabad to Hingalganj.   | Photo Credit: Wiki commons

Mazumder started visiting Hingalganj every Saturday morning, after teaching all week at the Kolkata school. She would wake up, make tea and breakfast, leave her family still asleep, and get a cab to Howrah station to take the 6.20 a.m. train that would reach Hasanabad railway station at 8.20. She would then go by cycle-rickshaw up to the bank of the river Dasha, a tributary of the Ganga, take a ferry across, get to the other side, and then take an auto-rickshaw to reach the makeshift school in the village by around 9 a.m. She would teach there until 3 p.m., when it was time to start back, and then do the whole rickshaw-ferry-rail trip back to Kolkata.

Slowly, she started training some women in the village to teach the children, and eventually had six resource persons-cum-teachers. She would pay them from her own salary that she got from the Kolkata school. “I have limited wants. And this school needed all the help.”

This routine continued every Saturday for six years until 2018, when it was time to buy land for the school. The land registration fee was high, an amount that Mazumder’s Provident Fund could yield. That is when she decided: “I cannot stand on both boats. I have got to make a choice.” She resigned, resolving to give the Hingalganj school the next two full years of her life. 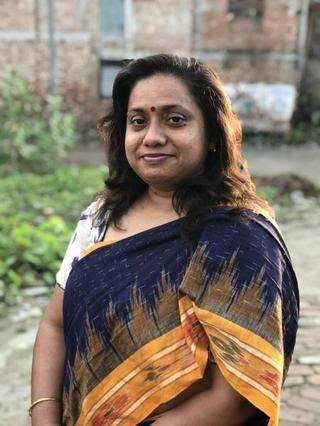 The school was named Swapnopuron, ‘Fulfilment of Dreams’, and it now has 350 pupils, from nursery to Class IX. “This year, we will go up to Class X,” Mazumder said, as I joined her on the drive down the Bashonti Highway from Kolkata to the Sundarbans. It happened to be a day of cultural programmes at the school, and as we turned the bend on the bridge over the river Icchamati, from where you can actually ‘see’ Bangladesh and houses on the other side of the border, the teachers and parents came into view. There are now five branches of Swapnopuron in Hingalganj block and 16 teachers in all, most of them having moved here, giving up their jobs at mainstream schools across Bengal. “It is a collective dream. I feel so grateful that all the teachers share the Swapnopuron vision,” says Mazumder.

At the school that day, a few women from Kolkata had come to inaugurate a water purifier they had donated for the children, as salinity is a big issue in the Sundarbans. As the students got ready to present a dance programme, their eager mothers sat in the back rows of the hall. Shikha Biswas, whose daughter Kosturi was all set to sing, said, “Before Didi and all the teachers came here, we could not even dream of an English school in this village. My father-in-law would say, what is the need to spend on sending daughters to school? She will get married and go away one day.” In fact, after working hours, the school’s teachers and staff still go around the houses, convincing the villagers to send their children to school. 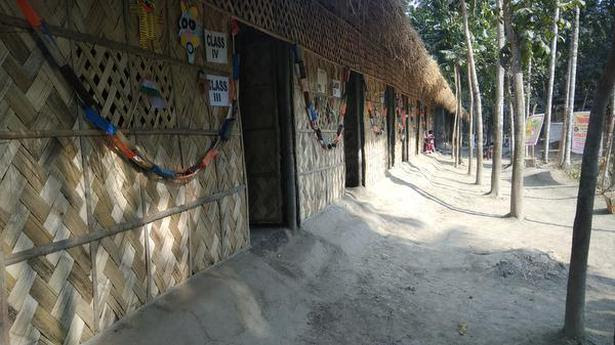 Shikha’s husband works at a prawn farm nearby, and the lockdown has hurt their already meagre earnings. The school has reduced its fees from ₹200 per month to ₹150, waiving even that off in cases where parents simply can’t afford to pay. At times, the teachers have had to go without salaries — one of the issues that prompted Mazumder to upskill herself. “Without knowing a thing, I now do fundraising, stakeholder analysis, project proposals,” she laughs. How has her family reacted to all this? “Earlier, there was resistance, but they saw my determination. Even my parents were against it. ‘Why can’t you simply give the money to someone to build a school, or why don’t you adopt a child?’ My daughter, when younger, felt I was neglecting her, but now she understands how big this is.”

Swapnopuron as a trust has taken up relief work for the devastation caused by cyclones Amphan and Yaas. It’s also a partner of Skill India, and has gone beyond conventional education to train women in occupations such as duck rearing. “Our vision is that the children, after passing from this school, should find a livelihood right here and not have to migrate to cities.”