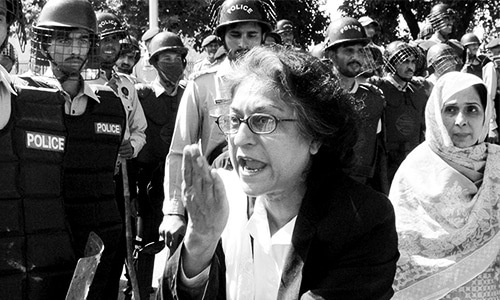 Asma Jahangir admonishes police personnel at a protest against the Election Commission of Pakistan in October 2007. Photo: White Star/File

LAHORE: Prominent lawyer and human rights icon Asma Jahangir passed away on Sunday after suffering a stroke. She was 66 years old.

Family sources said Jahangir‘s funeral will be held on February 13 as a family member is in London.

Officials at the private hospital where Jahangir passed away said she was brought to the hospital unconscious after suffering brain hemorrhage resulting from a stroke.

They added that despite several attempts to bring her blood pressure back to normal, she passed away in a state of unconsciousness.

Jahangir’s sister, lawyer and human rights activist Hina Jilani, told Geo News that “the way she [Asma] lived, it’s not just the family’s loss but also of those who are voiceless and whose voices she raised”.

Earlier, her daughter, broadcast journalist Munizae Jahangir, shared on Twitter that the family is awaiting relatives to return to Lahore before the funeral can be held.

Bar associations across the country have said they will be observing three days of mourning and not partake in court proceedings.

Jahangir remained the head of the Human Rights Commission of Pakistan and the Supreme Court Bar Association.

She was known for taking up court cases of victimised and marginalised sections of society, as well as speaking against human rights violations and her courageous stand against the military rule of General Zia-ul-Haq.

An author and staunch activist of democracy, Jahangir also received several accolades for her work on human rights.

Jahangir was also a vocal opponent of judicial overreach and would often confront the superior judiciary when it would extend its jurisdiction in her opinion.

Born in Lahore on January 27, 1952, Jahangir completed her bachelors of arts and law from Lahore and then went on to pursue higher legal studies from Switzerland, Canada and US.

She conducted consultancy on judicial reforms in Pakistan and Bangladesh for the Asian Development Bank and World Bank. Jahangir also remained a member of the Commission of Enquiry for Women from 1994-1997.

Jahangir was also an executive member at the International Crisis Group and chief economist advisory council member of World Bank since 2001.

She was also the founding member of Women’s Action Forum, Pakistan.

Jahangir also received several awards, including the 2014 Right Livelihood Award, 2010 Freedom Award, Hilal-e-Imtiaz in 2010 and Sitara-e-Imtiaz, UNESCO/Bilbao Prize for the Promotion of a Culture of Human Rights in 2010 and an Officier de la Légion d’honneur by France in 2014. The Legion of Honour is the highest French award.

At present, she was a partner at AGHS Law Associates and head of its legal aid cell.

Following the sad news, messages of grief and condolences poured in.

Condolences also poured in on Twitter over the demise of Jahangir.