The Jammu and Kashmir human rights commission today directed the state government to pay a compensation of Rs. 10 lakh to Farooq Ahmad Dar, who was used as a “human shield” by the Army during the Srinagar Lok Sabha bypoll. 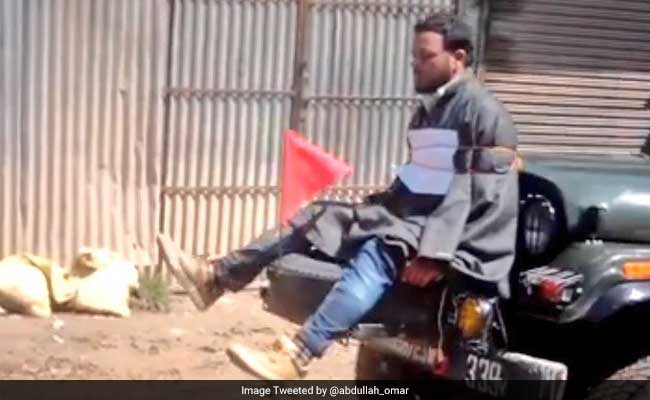 Major Leetul Gogoi said his team tied a protester to their jeep to stop attack from a mob in Kashmir.
SRINAGAR: The Jammu and Kashmir human rights commission today directed the state government to pay a compensation of Rs. 10 lakh to Farooq Ahmad Dar, who was used as a “human shield” by the Army during the Srinagar Lok Sabha bypoll.

The compensation awarded to Mr Dar was for the “humiliation, physical and psychiatric torture, stress, wrongful restraint and confinement” that he underwent when he was tied to the bonnet of an Army vehicle to ward off stone pelters, the State Human Rights Commission (SHRC) observed in its judgement.

“I have no doubt in my mind that Farooq Ahmad was subjected to torture and humiliation, besides (being) wrongly confined,” the judgement issued by SHRC chairperson Justice (retired) Bilal Nazki said.

He observed that the action led to trauma, resulting in psychiatric stress “which may remain with him for the rest of his life”.

“For the humiliation, physical and psychiatric torture, stress, wrongful restraint and confinement, the commission thinks it appropriate to direct the state government to pay a compensation of Rs. 10 lakh to the victim,” the SHRC said.

The commission directed the Jammu and Kashmir government to comply with the direction within six weeks.

The judgement is recommendatory in nature and would need the approval of the state government for implementation.

“The chief secretary of the state shall file a compliance report before the commission within the same period,” the ruling read.

The judgement came on an application moved by Ahsan Antoo, chairman, International Forum for Justice and Protection of Human Rights.
Justice (retd) Nazki said the police in its report had said Mr Dar was tied to the Army vehicle bonnet and used as a human shield, but observed that the commission was “handicapped” by the fact that it could not refer to the conduct of the Army because of the limited applicability of the Protection of Human Rights Act, 1993.

“There cannot be any debate as to whether the treatment given to Dar was a violation of human rights or not. There are laws in this country, and international laws, which prohibit such a treatment even to a convict. Such treatment to a human being cannot be accepted by a civilised society,” he said.

The commission, however, was “handicapped” by the fact that it could not go into the conduct of the Army who are allegedly responsible for the incident according to Mr Dar as well as the state police, he said.

The SHRC chairperson said that in view of the police report, Mr Dar has been subjected to human rights violations and, therefore, the state government could not escape from the responsibility.

“This commission chose not to issue any notice to the central government or the armed forces, but the fact remains that the protection of life and liberty of the people is basic responsibility of the state government,” the judgement said.

He, however, said that since the SHRC was not able to go into question of the Army’s responsibility, “the commission clarifies that any observation made in this order should not be taken as an expression of any opinion regarding the alleged involvement of officers of the Indian Army,” he said.

Mr Dar, an embroidery artisan, was tied to a jeep by Major Leetul Gogoi, as a shield against the stone pelters who had allegedly surrounded a group of armed personnel.

Shortly after the incident, Major Gogoi was honoured with a commendation card by the Army chief for “his sustained efforts in counter-insurgency operations”.http://www.ndtv.com/india-news/human-shield-10-lakh-compensation-for-farooq-dar-says-rights-body-1722950