Ahead of panchayat polls in West Bengal, the police found crude bombs at a former Trinamool lawmaker’s home in Bhangar

Hundreds of crude bombs were found behind the home of former Trinamool lawmaker Arabul Islam, at Bhangar, about 25 km from Kolkata. He was arrested on Friday, for the alleged murder of a supporter of an independent candidate.

Hafizul Mollah, was marching in a campaign rally when few people opened fire. He was shot in the face. Chief minister Mamata Banerjee had ordered Arabul’s arrest.

When the police were searching the area behind Arabul’s home, they stumbled upon a deep pit in the ground, where hundreds of bombs in buckets were found. 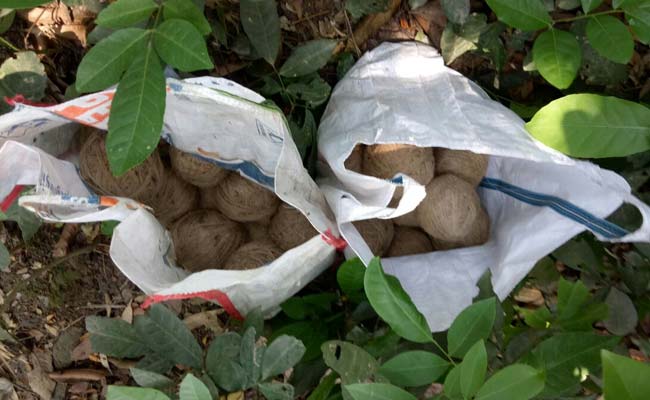 Opponents are calling the whole saga an “eyewash”. “The Chief Minister, by getting Arabul arrested can now say, she has done her ‘rajdharma‘ but it is all an eyewash. He will be out in no time,” an eyewitness of the incident told NDTV.

The Bengal BJP chief, Dilip Ghosh repeated the “eyewash” charge. Left party CPM’s SK Mishra said, “Nothing happens without the blessings of the Chief Minister, including the attack on the independent candidate’s campaign rally at Bhangar.”

Arabul, a muscleman and moneybag, according to sources, has been in and out of trouble with Ms Banerjee. He was suspended in 2013, reportedly for six years, but was back in business within a year-and-a-half.
After he was presented in court on Saturday, the Trinamool strongman told the media he was not in Bhangar at the time of the attack. Arabul’s lawyer claimed he returned to the area only at 6 pm, hours after the incident.

There is tension in Bhangar on the eve of panchayat polls, after Friday’s incident. Bhangar has been the site of violent protests against land acquisition for a power grid station since January 2017. Some ultra-Left groups have reportedly fanned a people’s movement against the power grid.

Hafizul Molla (25) who was taking part in a rally taken out by the Jami Raksha Committee for their contesting candidates contesting in the panchayat elections was shot dead when the former TMC MLA and his followers allegedly opened fire and hurled bombs at them.

On Saturday the Jami Raksha Committee demanded the immediate arrest of Khude and Hakimul, the brother and the son of Arabul Islam, respectively, who the committee claims were directly involved in the incident.

A large police force raided the areas surrounding Arabul Islam’s Uttar Gazipur’s house since this morning. A large quantity of bombs and bomb-making material which were stored underground in a mango garden near his house was seized. A police source said hundreds of live bombs were recovered from the garden.

Tension gripped the area soon after the reports of the discovery of the bombs spread in the villages.

Arabul Islam, the former MLA of Bhangor and the outgoing sabhapati of the TMC-led Bhangor-II panchayat samiti, was arrested from last night at around 10-30 pm after locating his mobile phone’s tower.

He said at the time the incident happened he had gone to a mosque for Namaz and after returning home at about 6-30 pm he was informed about the incident.

He added that neither he nor anyone of his party was present there at that time.