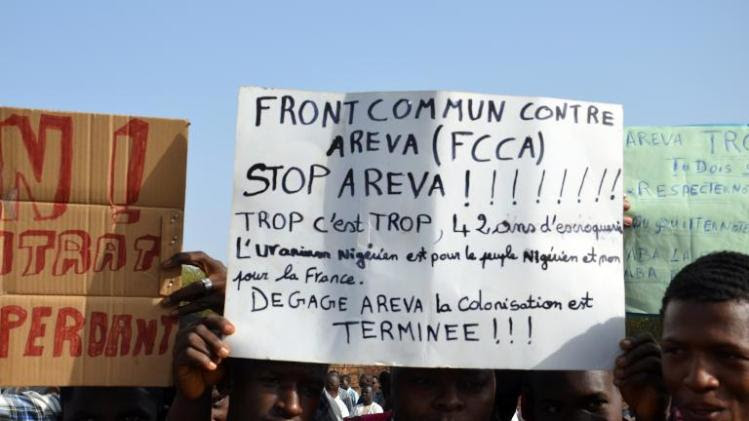 Niamey (AFP) – Up to 1,000 demonstrators marched in the Niger capital Niamey on Saturday to protest their country’s “unbalanced” partnership with nuclear firm Areva as the French giant negotiates a new uranium mining agreement with the government.

The protesters, including students, rights activists and politicians, chanted “Down with Areva!” and “No to a win-lose contract” as they made their way from the parliament building to the Areva offices, where they were held back by a police cordon.

Areva’s contract to extract uranium in the west African country expires on December 31, after more than four decades of mining at two sites on the southern edge of the Sahara, with a third under development.

The French group and the Niger government are locked in talks to renegotiate the terms for a further 10 years, and Niamey has been pressing for a greater share of revenue from Areva’s activities.

Ali Idrissa from transparency watchdog Rotab, which organised Saturday’s rally, said the contracts between Areva and Niger were “all unbalanced”, noting that the uranium sector accounts for 70 percent of Niger’s exports but only represents five percent of its Gross Domestic Product.

“In France, 35 light bulbs out of 100 are lit thanks to our uranium, while Niger has to use firewood for light,” he said.

Niger’s President Mahamadou Issoufou said earlier this month that the former French colony wanted to “balance out the relations” with Areva, adding that “the world has changed”.

According to Areva, 70 percent of the revenue from its mining activities in the country went to the Niger state last year, while Areva and other shareholders received 30 percent.

The French state holds a stake of more than 80 percent in Areva.

Globally, Niger is the fourth-ranking producer of uranium, after Kazakhstan, Canada and Australia, according to the World Nuclear Association.