Hungary Cracks Down on Migrants at Serbia Border

Platoons of Hungarian riot police were deployed along the newly fenced-off border with Serbia on Tuesday, while Austria moved to tighten its own frontiers amid an increasing sense of havoc caused by the wave of migrants moving through Europe.

German Chancellor Angela Merkel, frustrated with the bloc’s failure to agree to redistribute even a small fraction of the potential refugees, called for an emergency summit of European leaders next week.

After a four-hour meeting with cabinet ministers and German governors, whose states are bearing the brunt of taking care of the new arrivals, she announced more federal aid to help them cope with the crisis.

As Hungary said it would extend its new razor-wire fence partway along the frontier with Romania, masses of migrants, including small children, camped out in tents on the Serbian side of the newly sealed border posts.

Migrants filled shelters and camps in Austria, while those who made it as far as Vienna packed cheap hotels around the main train station or were sleeping on the streets. Told about Germany’s new border checks, many reacted with disbelief, a police spokesman in the town of Nickelsdorf said. 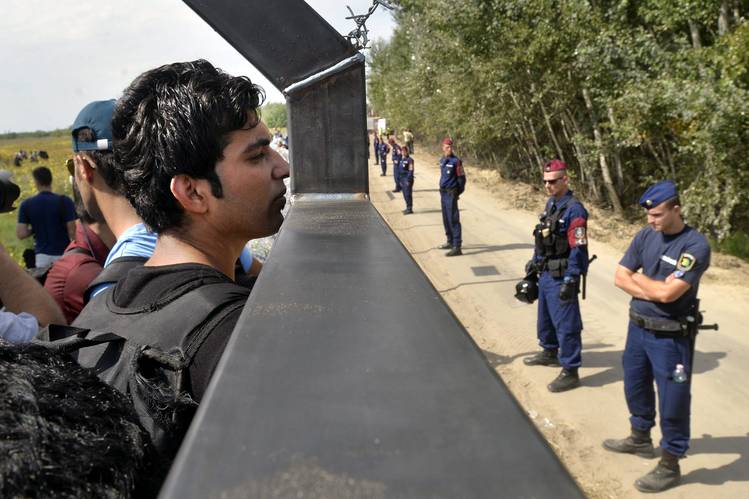 ENLARGE
Migrants in Serbia looking through the fence to Hungary on Tuesday. Hungary sealed the last gap in the barricade along its Serbia border. PHOTO: ZOLTAN MATHE/EUROPEAN PRESSPHOTO AGENCY

“We try to explain that they need to stay here, even if it’s not what they want,” he said. “Many somehow believe they’ll be able to get there anyway.”

Many if not most of the migrants are headed for relatively prosperous—and welcoming—countries in Northern Europe; Germany alone is preparing for as many as a million arrivals this year.

“Germany and Austria and Sweden cannot solve this problem on their own,” Ms. Merkel said in asking for the summit, calling it the responsibility of the entire EU. A decision on her request is expected Thursday.

The EU plan being considered would redistribute 120,000 migrants with a good shot at winning asylum because of their country of origin around the bloc. Central and Eastern European countries fervently object to mandatory quotas, however, and have held up its adoption.

They argue that the migrants will try to go to Germany and Sweden, with their generous social programs and strong economies, even if they’re placed somewhere else. They also say that such a plan would signal that Europe is opening its doors to migrants, encouraging even more people to make the perilous journey.

Hungary’s tough new border policy, including a law that punishes illegal entry with up to three years in prison, is the latest response from the conservative government in Budapest to the tens of thousands of migrants, mostly from the Middle East and Afghanistan, who have been crossing in from Serbia, which is not in the EU.

The Hungarian government said it would also build another 11½-foot barrier on part of its border with Romania, a fellow EU member, to stop people smugglers from switching to that route. The Romanian government criticized the measure as out of “line with the EU spirit.”

Human-rights groups have raised questions about how the new laws would be implemented, while EU officials have asked for clarifications from Budapest.

Prime Minister Viktor Orban has fiercely defended the 110-mile fence in the face of critics who said it evoked the repressive Iron Curtain.

“The fence of communism was directed against us,” he said in a weekend interview with the German newspaper Bild. “The fence we are currently constructing is meant for us.”

In an interview on Hungarian television Monday, he said the new measures were essential for “defending our lifestyle” against immigrants from a distinctly different culture.

The United Nations’ High Commissioner for Refugees, António Guterres, criticized Hungary’s action, noting that most of the migrants were coming from war-torn Syria, “so in need of international protection.”

“The question of closed borders is not only a legal question. It’s essentially a question of people in desperate need of protection not able to find it. Most basic human values have to be respected,” Mr. Guterres said in Brussels.

In Roszke, one of the main gateways between Hungary and Serbia, the Hungarian government shut the border around noon, pulling a tall metal barrier across a four-lane highway.

Timea Szabo, a human-rights expert and member of the Hungarian parliament who had crossed into Serbia before the shutdown, said about 1,000 migrants were stuck there and were being registered in a transit zone.

At an afternoon news conference, Hungarian government spokesman Zoltan Kovacs said 48 asylum requests had been received in Roszke. Sixteen had already been rejected, he said, meaning they were denied entry. Three of those applicants were challenging the rejection in court, he said. 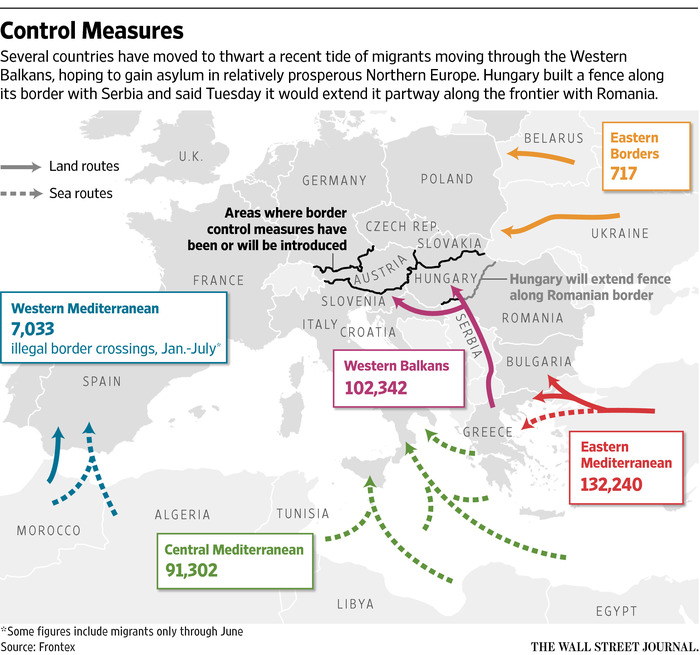 Hungary has maintained that most of the migrants first arrived in the EU in Greece—the point where they should have registered.

Gyorgy Bakondi, a chief adviser to Mr. Orban, said another processing centers was running in the border town of Szeged. He also said 174 migrants had been detained for illegal entry, and criminal proceedings had been started against them.

Dozens of police in riot gear lined up near the border in Roszke, with a police helicopter flying low overhead. Chants of “Germany, Germany” could be heard occasionally from the Serbian side.

By late afternoon, tents had popped up on the Serbian side as the migrants hunkered down, with some waving a poster with Ms. Merkel’s name.

“They cannot really decide at this point what comes next,” Gabor Balint from Hungarian Interchurch Aid, who was with the migrants, said by telephone. “They are settling down for tonight and likely make their mind up in a few days.”

Hungary’s decision to seal its border with Serbia prompted a rush of thousands of people Monday trying to beat the deadline.

On Sunday, Germany reintroduced identity checks along its border with Austria, chipping away at the bloc’s cherished system of open borders.

Some neighboring countries said they would follow suit either systematically or with spot checks. Austria on Tuesday announced it would reintroduce border controls on its borders with Hungary, Italy, Slovakia and Slovenia, starting Wednesday.

In Nickelsdorf, roughly 22,000 people had crossed from Hungary over the last three days. While a few set up small, blue-and-yellow tents Monday night, most were forced to sleep outdoors on the cement ground of the border station, protected from the rain by only a metal roof.

“I truly wish we could have offered more,” said a police spokesman, gazing at the sight. “It breaks my heart to see children having to spend the night like this.” 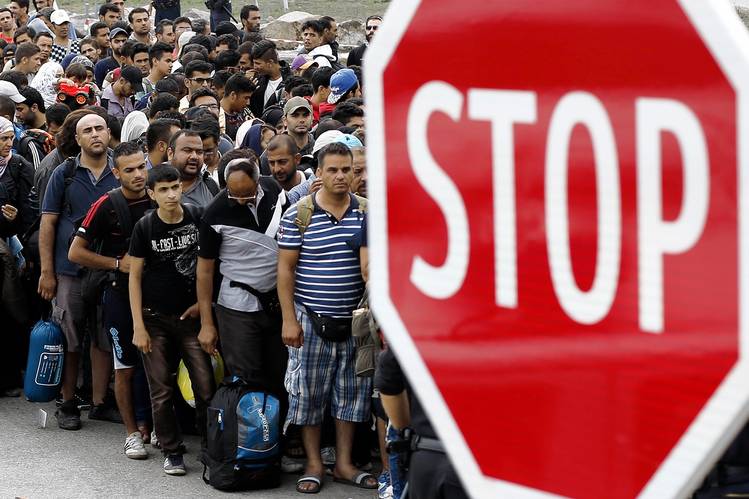 ENLARGE
After crossing the border from Hungary, migrants in Austria waited for buses to Vienna on Tuesday. PHOTO: ALEX DOMANSKI/GETTY IMAGES

Tuesday morning, dozens of taxis from near and far lined up to carry bedraggled travelers, jacking up the normal fare of about €100 ($112) to Vienna. One driver said he was charging €250, “sometimes €400, if there are many” people.

“Remember, this is big business,” said a policeman walking along the taxi line. “They make more these days than they would in a month.”

A 17-year-old student from Damascus, Sedra Koukash, who was traveling with a group of other Syrians she had met in Greece, was desperate to get one of the cabs, since she said the official buses were arriving only sporadically.

“Take us, take us,” she yelled over the long line of people in front of her. “We want to get on to Germany, and then to Sweden. But it doesn’t really matter right now. Now we just want to get out of here.”

Most were gone by the end of the day, with few new arrivals, police said.

Ms. Merkel cleared her Tuesday schedule to deal with the crisis, canceling a meeting with the Estonian prime minister and a cabinet retreat.

Instead, she met with Austria’s Chancellor Werner Faymann, then for four hours with the governors of Germany’s 16 states. She promised them measures to help them manage the crisis—from new mobile teams to help process asylum applications to 40,000 additional shelter beds.

“There was broad agreement that we want to give protection to people who need protection, and we will do everything humanly possible for this,” Ms. Merkel said. Migrants who don’t qualify for asylum, she added, wouldn’t be able to stay in Germany.

A German-led effort to mitigate the crisis by redistributing migrants more evenly across the bloc has made little progress. EU members including Hungary, the Czech Republic, Slovakia and Poland stood firm in their rejection of the plan at a meeting of European interior ministers in Brussels on Monday; another session has been called for Sept. 22.

—Anton Troianovski in Berlin and Valentina Pop in Brussels contributed to this article.