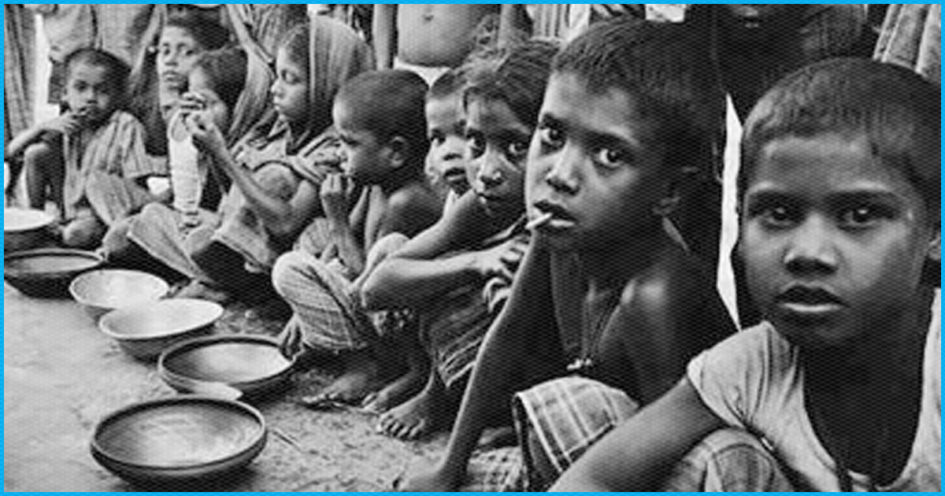 The three farm acts, against which farmers have been protesting for the past fortnight, could make the situation worse as it endangers the entire procurement mechanism, and hence, the PDS itself.

The report also noted that the three farm acts, against which farmers have been protesting for the past fortnight, endanger the entire procurement mechanism, and hence, the PDS itself, which has been one of the few safety mechanisms for the marginalised during this tough period. In other words, the three farm laws are likely to exacerbate the worsening hunger situation in the country.

One in four Dalits and one in four Muslims reported facing discrimination in accessing food since the lockdown, a report compiled by the Hunger Watch, a collective of the ‘Right to Food’ campaign and allied organisations, found in its post-Covid hunger survey. One in ten people from the ‘general’ category reported facing discrimination in accessing food.

The survey also found that the quantity of food consumption decreased for about 74 per cent of the Dalits.

The study also found that nearly 45 per cent people from these 11 states were so affected financially that they had to borrow money to eat. This was an increase from pre-lockdown levels. “The need to borrow money among Dalits was 23 percentage points more than those in the ‘General’ category’,” the report noted.

‘Hunger Watch’ also found that the quantity of food consumption decreased for about 74 per cent of the Dalits.

The survey also found that till as late as in September-October this year, one in four respondents, from the 11 states in which the survey was conducted, ‘often went to bed without eating’.

About 56 per cent of the respondents never had to skip meals before lockdown. Of them, one in seven had to either skip meals ‘often’ or ‘sometimes’ in the September-October period.

The report was compiled on the basis of the feedback received from nearly 4000 respondents, from vulnerable and marginalised communities, from Uttar Pradesh, Madhya Pradesh, Gujarat, Rajasthan, Maharashtra, Chhattisgarh, Jharkhand, Delhi, Telangana, Tamil Nadu and West Bengal.

For ‘Hunger Watch: Situation of Hunger and Food Security in Post-Covid Times’ the respondents’ situation in pre-lockdown (April-May) was compared to their post-lockdown situation in September-October.

Of these respondents, 43 per cent reported no income for the months of April-May and the incomes of only 3 per cent had gone back to the pre-lockdown levels.

Till as late as in September-October this year, one in four respondents, from the 11 states in which the survey was conducted, ‘often went to bed without eating’.

On an average, the report found that, the quantity of food consumed by the people in these 11 states had decreased by 66 per cent. Sharpest decrease in quantity of food consumed was found in Jharkhand (82 per cent) followed by Delhi (81 per cent) and Rajasthan (80 per cent). Over two-third of the respondents said that their nutritional quality had worsened by as much as 90 per cent (Chhattisgarh) in some places.

The report noted that “the four labour codes disempower the informal sector workers and make their access to wage employment even more precarious thereby affecting their ability to buy food. The three farm Acts, as is being argued by the farmers’ movements, endanger the entire procurement mechanism and hence the PDS itself.”

Hunger Watch in its report recommended setting up a universal public distribution system that provides every individual with 10 kg grain, 1.5 kg pulses and 800 gm cooking oil for at least the next six months up to June next year and 200 days of employment per household under the National Rural Employment Guarantee Act (NREGA), among other measures.

11 States Survey finds acute situation of hunger across the country

The Right to Food Campaign is shocked with the worsening situation of hunger, although it is more than five months since the lockdown has ended. This emerged in the presentation of the Hunger watch study carried out by Right to Food Campaign and Center for Equity Studies in 11 states, Chhattisgarh, Delhi, Gujarat, Jharkhand, Madhya Pradesh, Maharashtra, Rajasthan, Tamil Nadu, Telangana, Uttar Pradesh, West Bengal. Today, the Right to Food Campaign held a press conference to share the findings of a national survey on situation of hunger and malnutrition. Vulnerable communities in rural and urban areas were identified by local activists/researchers who then shortlisted the households to be surveyed within these communities based on group discussions with the community. A simple questionnaire was developed and administered using smart phones. This is one of the few in-person surveys that have been conducted since the pandemic. While the data being presented may not be representative of the district, state or country, they tell a story of deprivation of thousands of households in similar situations.

The preliminary results from the Hunger Watch, show that the situation of hunger is quite serious, even five months after the lockdown has ended. A large number of households report lower levels of income (62%), reduced intake of cereals (53%), pulses (64%), vegetables (73%) and eggs/non- vegetarian items (71%), worsened nutritional quality (71%) and an increased need to borrow money to buy food (45%). Government support in the form of free rations, and alternatives to school and anganwadi meals in the form of dry rations and/or cash transfers reached more than half the people (PDS having relatively better outreach). While this support from the government programmes has been crucial, the staggering levels of hunger witnessed during the Hunger Watch also showed the inadequacy of these schemes. Many are left out and even among those who did get the entitlements, the overall consumption was still lower than what it was before the lockdown. This calls for strengthening and expansion of these schemes.

The main findings from the survey are presented below. The figures presented here are not weighted by the sample size or population of the states but are simple averages. A detailed note on the survey can be accessed here (English/Hindi) and the presentation made in the press conference is available here.

HIGHLIGHTS FROM THE HUNGER WATCH

Change in Consumption Patterns in September-October compared to before lockdown

In summary, what we see is that for a large majority of people, there is no change in their economic status from what it was in April-May.

Consumption of cereals, pulses and vegetables “decreased a lot” in September/October compared to pre-lockdown

Overall decline in nutritional quality and quantity, even the relatively better off affected badly

Need to borrow money for food has increased for all

OBSERVATIONS FROM VOLUNTEERS WHO CARRIED OUT THE SURVEY

In addition to these highlights, volunteers who had carried out the surveys in the states also shared some key observations. From Gujarat, the issue of cancellation of ration cards and irregular supply of grains under the Mid Day Meal Scheme was observed by surveyors. From Jharkhand, the campaign shared that the state has seen starvation deaths due to the worsening economic condition and inability to afford even basic foodgrains. The High Court has taken suo motu cognisance of the issue after it was reported that three members of a family from Bokaro district succumbed to hunder and starvation in a span of six months. From Maharashtra, volunteers shared that the nutrition intake had suffered tremendously and the condition of the urban poor was especially concerning as in many cases domestic workers reported that they had not even received wages since the lockdown.

In Uttar Pradesh, the condition of vulnerable communities like Musahari has become especially precarious. Volunteers who carried out the survey shared that they found the community collecting chicken feathers for consumption in order to survive. From West Bengal, the problems faced by people in obtaining ration cards was shared due to the difficulties in furnishing necessary documents. From Chhattisgarh it was highlighted that the return of migrant labourers resulted in exacerbation of the situation of hunger as the labourers were not enrolled under food security schemes in their home state or where they worked. From Delhi, volunteers shared that the state of the poor and marginalised living on rent in slum settlements and the homeless is especially vulnerable as they are not covered under the PDS due to not possessing necessary documents like address proof, electricity bill required to apply for a ration card- only 37% of the population in Delhi gets grains under PDS.

CAMPAIGN’S VIEWS ON THE FARM LAWS AND LABOUR CODES

At the press conference, the campaign expressed its solidarity with the farmers’ organisations across the country that have been protesting against the three farm laws that were passed in Parliament in an undemocratic manner, without proper discussion. These laws will have serious implications on the well-being of farmers as well as food security, hunger and malnutrition. The provisions of the National Food Security Act 2013 (NFSA 2013) that aims to ensure food security for all, has been completely ignored by the government while presenting these three bills in the Parliament. Schedule 3 of the NFSA 2013 states that the government should make provisions for advancing food security through measures that protect rights of small and marginalized farmers by bringing in land reforms, developing minor and small irrigation systems, providing remunerative prices, power and crop insurance. The NFSA also includes provisions for procurement, storage and movement related interventions that will help in promoting decentralised procurement. These three farm laws provide a completely different vision where the state’s role in procurement will reduce and the market is opened up for corporate interests without any protective regulation. Weakening the MSP and procurement mechanism could have serious implications for the PDS, pushing it towards cash transfers.

Speakers also highlighted the concerns of the campaign on the labour codes. The four labour codes disempower the informal sector workers and make their access to wage employment even more precarious thereby affecting their ability to buy food. Although half the people in India work in agriculture, most are net-buyers of food. Wages from employment is an important source of livelihood, and household food security depends on this greatly. The new labour codes make the employment conditions in the informal sector even more precarious, weakening minimum wage legislation. Further, social security code mostly addresses those in the formal sector and the power of collective bargaining is also weakened through these codes. All of this could result in even fewer people having secure and decent employment, thereby affecting food security adversely.

While this is the situation on the ground, some of the policy and legislative developments in the last few months are such that they could make the situation much worse such as the labour codes and the farm laws. During this crisis, as the Hunger Watch also shows, the PDS has been one of the few safety mechanisms that has worked for those are included in its net. Many also expressed the added vulnerability faced by them, especially in ensuring nutritious meals for children, in the absence of the school and anganwadi meals. The need therefore is to ensure universal access as well as expanded entitlements during this period of crisis. In this context, we make the following recommendations/ we demand the following:

(On behalf of Right to Food Campaign)

Nithari Murders - What Surinder Koli needs is a doctor, not a hangman #deathpenalty
Breastfeeding intrinsic to life, don’t ‘milk’ it for politics #Womensday
Why Adani group companies have little analyst coverage
Solar power is the best & natural substitution for energy needs