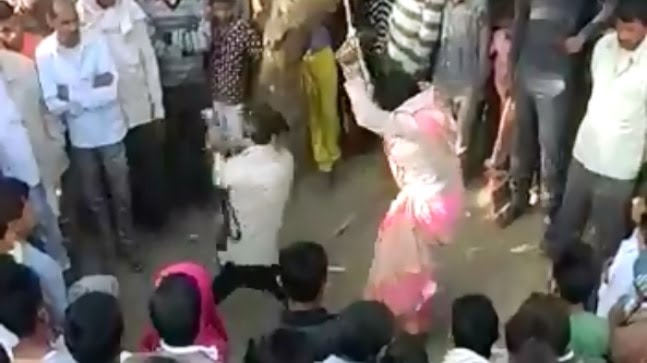 Screenshot of the video

Earlier this month, a panchayat somewhere in Uttar Pradesh’s Bulandshahr district is said to have sentenced a married woman to flogging in public.

Her crime? She had eloped with another man.

So, on March 10 in Launga village, the 20-something-year-old woman was tied to a tree and whipped by her husband in the plain view of a crowd. Somebody in this crowd taped the entire incident and let the video loose on social media.

The video, taken from a distance, shows a man in a green shirt mercilessly whipping a woman tied to a tree, with what looks like his belt. As the woman screams in pain, a group of men can be seen standing silently in a circle around the tree, watching the show.

The authenticity of the footage is yet to be verified.

A report on Hindustan Times said that the husband, along with a former panchayat head and his son, has been arrested. A case has also been registered against 18 people, 12 of them unidentified, based on the video clip.

“Former pradhan Shersingh, his son Shravan, and woman’s husband, Shaudan Singh, have been arrested and raids are underway to arrest other accused,” the report quotes Bulandshahr SP Praveen Ranjan Singh.

Police said that the panchayat came up with the punishment of flogging because they wanted to “teach a lesson to the woman”.

Reports have it that after the flogging, former pradhan Shersingh and his croonies molested the woman and threatened her to keep silent.

We won’t forget, we won’t forgive nor will we give up ’Kunan-Poshpora nightmare turns 24
Dalit author - Kancha Ilaiah fears he may be killed like Gauri Lankesh
Trauma and Testimony in Digital Times
The Dark And Secret Dungeons Of Iraq: Horror Stories Of Female Prisoners