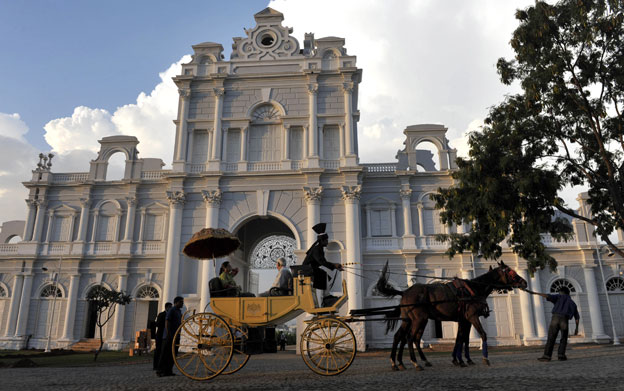 When India was partitioned in 1947, about 500,000 people died in communal rioting, mainly along the borders with Pakistan. But a year later another massacre occurred in central India, which until now has remained clouded in secrecy.

In September and October 1948, soon after independence from the British Empire, tens of thousands of people were brutally slaughtered in central India.

Some were lined up and shot by Indian Army soldiers. Yet a government-commissioned report into what happened was never published and few in India know about the massacre. Critics have accused successive Indian governments of continuing a cover-up.

The massacres took place a year after the violence of partition in what was then Hyderabad state, in the heart of India. It was one of 500 princely states that had enjoyed autonomy under British colonial rule.

When independence came in 1947 nearly all of these states agreed to become part of India. 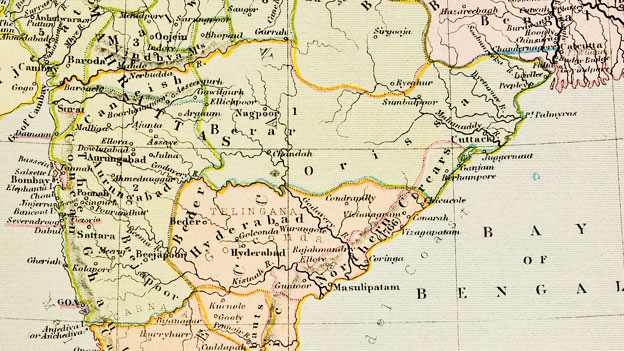 But Hyderabad’s Muslim Nizam, or prince, insisted on remaining independent. This refusal to surrender sovereignty to the new democratic India outraged the country’s leaders in New Delhi.

After an acrimonious stand-off between Delhi and Hyderabad, the government finally lost patience. 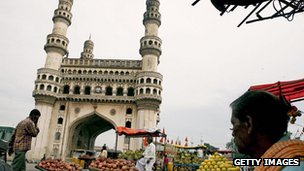 Historians say their desire to prevent an independent Muslim-led state taking root in the heart of predominantly Hindu India was another worry.

Members of the powerful Razakar militia, the armed wing of Hyderabad’s most powerful Muslim political party, were terrorising many Hindu villagers.

This gave the Prime Minister, Jawaharlal Nehru, the pretext he needed. In September 1948 the Indian Army invaded Hyderabad.

In what was rather misleadingly known as a “police action”, the Nizam’s forces were defeated after just a few days without any significant loss of civilian lives. But word then reached Delhi that arson, looting and the mass murder and rape of Muslims had followed the invasion.

Determined to get to the bottom of what was happening, an alarmed Nehru commissioned a small mixed-faith team to go to Hyderabad to investigate.

It was led by a Hindu congressman, Pandit Sunderlal. But the resulting report that bore his name was never published.

Historian Sunil Purushotham from the University of Cambridge has now obtained a copy of the report as part of his research in this field. 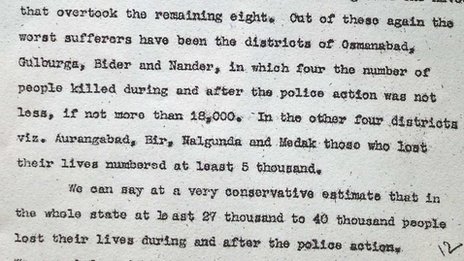 The Sunderlal team visited dozens of villages throughout the state.

At each one they carefully chronicled the accounts of Muslims who had survived the appalling violence: “We had absolutely unimpeachable evidence to the effect that there were instances in which men belonging to the Indian Army and also to the local police took part in looting and even other crimes.

“During our tour we gathered, at not a few places, that soldiers encouraged, persuaded and in a few cases even compelled the Hindu mob to loot Muslim shops and houses.”

The team reported that while Muslim villagers were disarmed by the Indian Army, Hindus were often left with their weapons. The mob violence that ensued was often led by Hindu paramilitary groups.

In other cases, it said, Indian soldiers themselves took an active hand in the butchery: “At a number of places members of the armed forces brought out Muslim adult males from villages and towns and massacred them in cold blood.”

The investigation team also reported, however, that in many other instances the Indian Army had behaved well and protected Muslims. 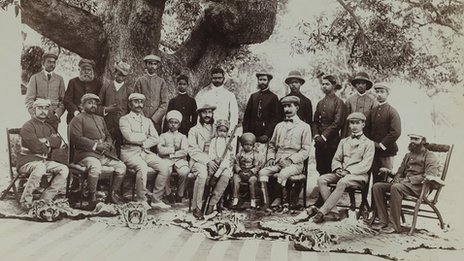 The Nizam of Hyderabad was a powerful prince. In this picture taken in 1899, the Nizam, Mahbub Ali Khan, and his party pose with tiger skins

The backlash was said to have been in response to many years of intimidation and violence against Hindus by the Razakars.

In confidential notes attached to the Sunderlal report, its authors detailed the gruesome nature of the Hindu revenge: “In many places we were shown wells still full of corpses that were rotting. In one such we counted 11 bodies, which included that of a woman with a small child sticking to her breast. ”

And it went on: “We saw remnants of corpses lying in ditches. At several places the bodies had been burnt and we would see the charred bones and skulls still lying there.”

The Sunderlal report estimated that between 27,000 to 40,000 people lost their lives. 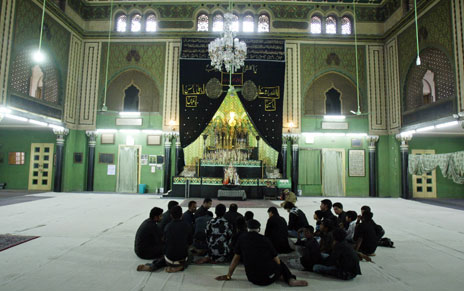 No official explanation was given for Nehru’s decision not to publish the contents of the Sunderlal report, though it is likely that, in the powder-keg years that followed independence, news of what happened might have sparked more Muslim reprisals against Hindus.

It is also unclear why, all these decades later, there is still no reference to what happened in the nation’s schoolbooks. Even today few Indians have any idea what happened.

The Sunderlal report, although unknown to many, is now open for viewing at the Nehru Memorial Museum and Library in New Delhi.

There has been a call recently in the Indian press for it to be made more widely available, so the entire nation can learn what happened.

It could be argued this might risk igniting continuing tensions between Muslims and Hindus.

“Living as we are in this country with all our conflicts and problems, I wouldn’t make a big fuss over it,” says Burgula Narasingh Rao, a Hindu who lived through those times in Hyderabad and is now in his 80s.

“What happens, reaction and counter-reaction and various things will go on and on, but at the academic level, at the research level, at your broadcasting level, let these things come out. I have no problem with that.”