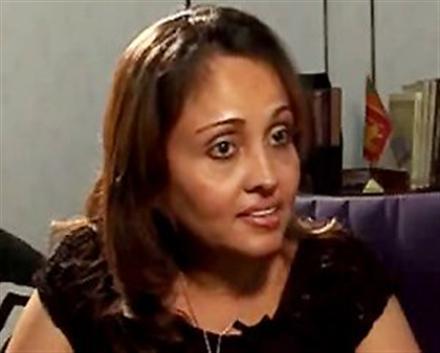 Founder hacked to death in daylight , his successor sacked ; the future of the “Sunday Leader” questioned

(September 21, 2012, Colombo, Sri Lanka Guardian) Here is an exclusive interview with the former editor-in-chief of the Sunday Leader , Frederica Jansz just moments after she was forced to resign by the new ownership of the paper, due to her refusing to accepted new editorial policy.

NI. Frederica, welcome to the Sri Lanka Guardian. Your services as the editor-in-chief of the Sunday Leader have been terminated as you refused to change editorial policy to support the government. What did they (owners) ask you to do? What are the basic points that you cannot stand with?

FJ. The new owner Asanga Seneviratne insisted that the articles carried in The Sunday Leader are “malicious and rubbish.” He ordered me to stop being critical of President Mahinda Rajapaksa and his family. He also asked me stop carrying cartoons of the President. He then added to a police complaint made by Sajin Vass Gunewardena, which claimed that a nutshell carried in The Sunday Leader of September 16 would incite violence against the President.

Despite my maintaining that the type of journalism practised at The Sunday Leader was independent and unbiased he could not understand or accept this position. As for me, I cannot work for someone who does not understand or respect freedom of expression or journalistic independence and credibility.

NI. You are the editor who took sole responsibility of the Sunday Leader just after the assassination of the late Lasantha. What are the challenges you faced in the last couple of years?

FJ. The challenges have been huge. Apart from having to revive a newspaper that had suffered a staggering blow following Lasantha’s assassination, I have had to deal with continuous harassment and threats including court cases and finally being insulted and maligned in a manner most degrading by the Defence Secretary, the President’s brother.

NI. Do you and your family feel safe to stay in the country?

FJ. No. I have repeatedly received death threats and even been followed home.

NI. I don’t want to reiterate words that the country’s secretary defence used in a recent interview published by the Leader. You had bitter experiences many times when you were directly dealing with those key players in the country. Can you brief us on the present political system in the country?

FJ. In terms of media freedom, the current political system will continue to stifle free of expression and the right to information. If compared to a thriving democracy, Sri Lanka continues to lag far far behind.

NI. At some point we talked about “Sri Lankan Journalism”. Do you have anything special to share with the people in this crucial time?

FJ. It is sad that journalists in Sri Lanka have chosen to be cowed into submission. Next to winning the war, this in fact is this government’s second biggest success. The stifling of the local press.

NI. This is a worse stage of social control in the country by the regime. So now the Government has taken over most of print, electronic and other media, while giving the public a clear cut picture on censorship. What would be the future if this scenario continues?

FJ. An autocratic regime. With a stifled press accountability and transparency are non-existent.

NI. Do you think the opposition and the civil society can intervene to solve this stalemate?

FJ. The opposition is dead.

NI. Is there any role to be played by the international community?

FJ. I frankly do not think this government really gives a toss about the international community or what they may think or say. Other than China – and we all know their track record as far as freedom of expression is concerned.

NI. Most people welcomed the draft resolution by the US on Sri Lanka, which urges the implementation of recommendations given by the LLRC. The people of Sri Lanka expect that the government will be encouraged in the Universal Periodic Review to take gradual action, not only at the legislative level, but beyond that to implement basic principles of rule of law. Do you have any suggestions to the UPR which is going to have on next month?

FJ. Amongst the voluntary commitments undertaken by Sri Lanka, one is to “strengthen its national mechanisms and procedures to promote and protect human rights and fundamental freedoms of all its citizens through the adoption and implementation of the proposed National Plan of Action”. Despite the government promising to implement the targets set out in the plan by 2009, it was only in 2012 that the initial stages of implementation were underway.

NI. This is my final question. You were a remarkable and fearless editor who worked in a tremendously stressful social situation. What is your plan for the future?

FJ. Change is a part of life. So for me, this is just another opportunity for a new beginning.