I stand with Asha Devi and I oppose the death penalty 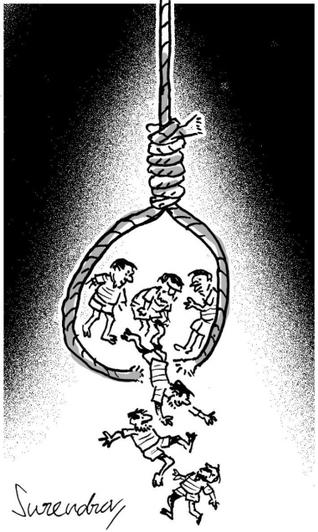 There is the smell of death clinging to the air. The four men convicted in the #Nirbhaya case have been executed. Unacceptable finality to a seven year struggle and debate on rape, carceral politics and the death penalty.

However, I must share my thoughts at this time. I stand unequivocally against the death penalty – it is on that ground alone that I oppose this quadruple hanging.

I do not for a moment think about how the four men felt when they were woken up before dawn and asked to prepare themselves for death, whether or not they experienced remorse in their seven years in custody, etc. In the crime they were convicted for, death is one of the prescribed punishments. It has been nobody’s case that they were convicted for a crime they did not commit (as for instance IS our argument on the execution of Afzal Guru and of Kehar Singh). So without going into the intractable realms of their mental states, my straightforward position is that nobody should be executed – no matter what the offence they are convicted for. It is a demand for the rule of law. I mourn the loss especially of Afzal Guru for a crime we all know he did not commit and I often revisit his every step to the gallows with a deep sense of pain. I do not feel similarly at this moment.

I feel anger at the existence of the death penalty. Period.

There has been some speculation and negativity around Asha Devi’s response. While I certainly feel that the ends of justice in the case of the fatal assault on her daughter Jyoti Singh were met by the deliberations around and the passing of a new legislation; and the trial and conviction of the accused, I would not dismiss her grief, her pain and her feeling of closure with the execution.

There is no doubt in my mind that she feels a sense of closure at this moment. It is not my place to judge her on that, or even to expect that she forgives those responsible (even in death). I feel a deep sense of empathy with her – in her grief and her insatiable search for justice, which may not be quelled even by this collective execution, but we will never know (nor will she) what it takes to “get over” the brutal loss of a daughter.

I stand with Asha Devi and I oppose the death penalty.