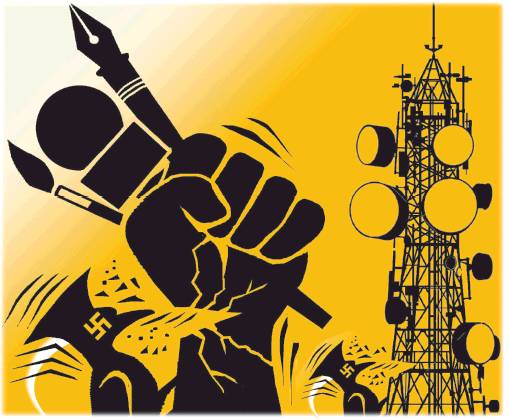 The Madras High Court has, last month, made a strong case in favour of freedom of the press and media, noting that unless functions of the Fourth Estate are safeguarded, India may well become a Nazi State. Justice PN Prakash, while quashing defamation proceedings against the Tamil edition of India Today magazine, noted in his judgment: “India is a vibrant democracy and the Fourth Estate is indubitably an indispensable part of it. If the voice of the Fourth Estate is stifled in this manner, India will become a Nazi State, and the hard labour of our freedom fighters and makers of our Constitution will go down the drain.”

He further emphasised that “if the Press is gagged, democracy in this country will be in utter peril … There may be some occasional transgressions by the Press, however, in the larger interest of sustaining democracy, those aberrations deserve to be ignored.” In fact, the Court also observed that such exposure is to be expected when a person voluntarily opts to become a public figure. “Nobody is invited with platters for coming into public life. Therefore, after voluntarily coming into public life, one cannot be heard to feign sensitiveness and trample the Press for no good reason. This Constitutional Court will be failing in its duty if such attempts by the mighty State are not resisted.”

Judgments like these ought to serve as ster n war ning to the perpetrators right across the spectrum of political parties, governments and corporates who routinely violate media freedoms in India. While on paper, India has a “free” media which all politicians love to pontificate about, the reality has been quite different for several decades now.

Journalism is now being attacked more aggressively than ever before, with journalists routinely in the crosshairs of all manner of entities. Earlier this year, India fell two places to 138 in the Press Freedom Index put out by Reporters Without Borders. More recently, it was in the august company of 14 countries including Somalia and Syria, where killers of journalists have gone scot free. India’s ranking in this, the Global Impunity Index from the Committee to Protect Journalists, has, in fact, worsened since the previous report, and impunity for violence against the Press is considered to be ‘entrenched’ here.

There are other, more basic efforts at muzzling the media apart from the examples of criminal defamation cases, harassment and violence.

One is access. Many journalists are denied access to specific information or simply barred from entering certain offices in the pursuit of their professional duties, even as media managements are threatened with legal notices and other forms of bullying the moment there is an uncomfortable report. It took a recent high profile exemplar involving Donald Trump and the CNN, to show how successfully US media was able to fight this denial of access to information and news, pointing out that this is also a form of media intimidation and a contravention of the First Amendment.

Second, is the highly condemnable, pernicious practice of governments and corporates denying media entities advertisements, veritably misusing taxpayers’ money to pressure or influence those which are critical of them. This is nothing but “soft censorship”, and was slammed by the World Association of Newspapers and News Publishers, the global organisation of the world’s press, in a detailed report some years ago. It specified that the “abusive allocation of government advertising to reward positive coverage, and punish critical coverage is doubly pernicious, as taxpayer money and public wealth is used and abused to promote partisan or personal interests”.

Third, are the periodic attempts to interfere with the nuts and bolts of businesses, most famously in the 1970s, which culminated in the Emergency. As finance minister Arun Jaitley has publicly stated over the last couple of years, measures which impact the businessand not only the contentofmedia, also impinge on our Constitutional freedoms. He said: “In relation to Article 19(1)(a), consistently with every judgment, the predominant thrust of the Supreme Court has been to protect, preserve and to expand the right of freedom of speech and freedom of Press … Today, this right extends not merely to your right to report – but its horizons have been widened … And therefore, the distinction between content of a medium and business of the medium has also been obliterated. Is the business of a newspaper or a news channel entirely 19(1)(g)? The answer is ‘No’, to the extent that if you pinch the pockets of a newspaper or a news channel, and therefore, infringe on its free speech, you impact adversely on Article 19

(1)(a). And therefore, the business itself can’t be segregated as far as free speech is concerned. The right to know, the right to information – these are all the rights which have been read into Article 19(1)(a) with its horizons today expanded.”

In a speech last month, Mr Jaitley also cited the 1974 move to restrict the size of a newspaper including the number of advertisements, and pointed out that “ads keep news alive as they financially support the publication of news. Cutting down ads is effectively denial of your right to publish news – courts said you can’t do it.”

Then, there is the tired old set of attempts by successive governments to threaten to bring new content “regulators” or outline new media laws on top of the many layers of restrictive laws that already exist. In addition to myriad IPC clauses, there are over thirty laws in India which newsrooms already abide by, apart from sector-specific legislation over and above self-regulatory guidelines. More laws and regulation are merely excuses for greater controls over the traditional media, and come in the way of the Indian media industry realising its true potential.

It has been stated before and this begs reiteration. The Indian media industry can still become the next big sectoral story with great potential for employment, growth, cutting edge technological practices, as well as pushing Indian soft power across the globe. But this is possible only in an enabling environment – and not when reporters are threatened, corporates and governments deny advertising for inconvenient coverage, or when policies are designed to emasculate media entities.

A subterranean war against the media to prevent it from becoming strong, independent and free, helps only the true enemy of the people … those who are trying to demolish the great Indian democracy.