In a first, Japanese court rules that nuclear plant operator is liable for suicide 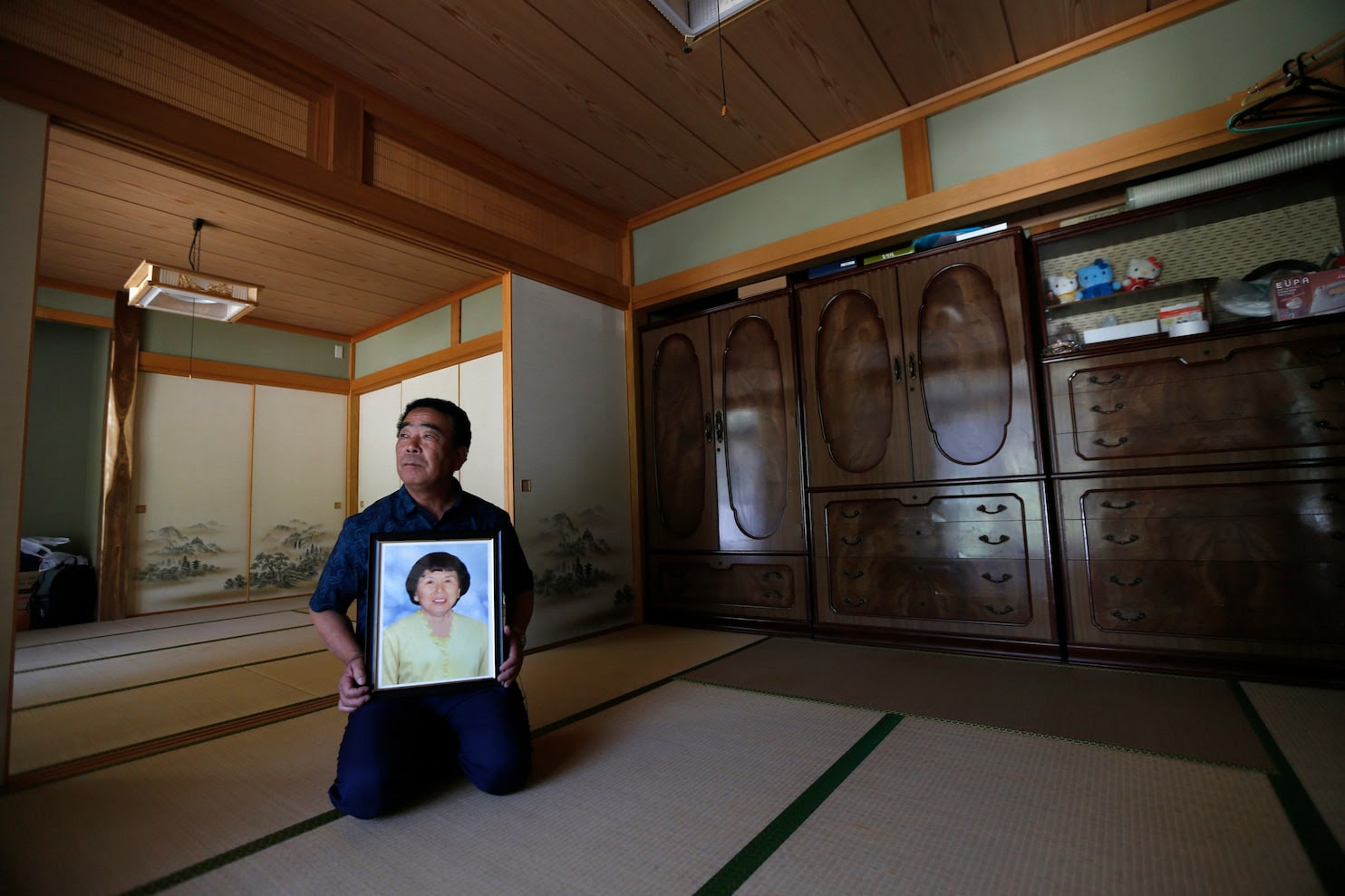 Mikio Watanabe holds a portrait of his late wife Hamako at his home at Yamakiya district in Kawamata town, Fukushima prefecture in this June 23, 2014, file photo. (Issei Kato/Reuters)
By Anna Fifield and Yuki Oda August 26 at 6:07 AM

TOKYO — A court in Fukushima has ruled that Tokyo Electric Power Co., the Japanese nuclear power plant operator, can be held responsible for the suicide of a woman who became depressed after the 2011 disaster.

The court ordered Tepco to pay $470,000 to Mikio Watanabe and his children after their 58-year-old wife and mother, Hamako, killed herself a few months after the nuclear meltdown that followed the earthquake and tsunami forced them out of their home and destroyed their livelihoods.

The ruling was the first time that the struggling utility had been found liable for a suicide resulting from the accident, and could galvanize others seeking redress against the company.

“I think we received a meaningful ruling that’s consistent with our feelings,” Watanabe said at a news conference after the ruling Tuesday. “The family’s suffering and pain are rewarded. When I return home, I’d like to report the result to Hamako’s portrait and tell her to have a good rest.”

“This ruling is significant as the precedent of a case caused by the nuclear power plant accident,” said Tsuguo Hirota. “Today’s verdict will greatly influence future lawsuits.”

For its part, Tepco, which has been widely faulted for its slow and muddled response to the disaster, issued an apology.

“We apologize from the bottom of our hearts again that the Fukushima Daiichi nuclear power plant accident is causing much inconvenience and concern to Fukushima prefectural residents and many people,” said Yoshimi Hitosugi, a spokesman for the company.

“Also, we offer our sincerest prayers for the late Mrs. Hamako Watanabe’s soul,” he said. “We will closely examine the content of the ruling and continue to respond sincerely.”

The Watanabes worked on a chicken farm in the mountain town of Yamakiya, about 23 miles from the nuclear plant but which was not included in the government’s original evacuation zone.

However, a month after the disaster, the town was declared radioactive and the Watanabes moved to a cramped apartment in a city further away from the plant.

Watanabe told The Washington Post in 2012 that his wife started taking sleeping pills. They both lost their jobs when their chicken farm was forced to close, and they lost their house, on which they still owed $140,000.

They returned to their house for one night in June 2011, when short visits were allowed. The next morning, Watanabe found his wife’s body outside.

A number of families in similar situations made complaints against Tepco, which reportedly settled with some. Hitosugi refused to say how many cases the company had settled or how much it had paid out.

But the Watanabe family persevered with its lawsuit, blaming Tepco for the suicide and seeking $900,000 in compensation, including for lost future earnings.

“I can’t hold back my anger,” Watanabe told The Post in an interview in 2012.

Legal action relating to the accident has been limited. This is partly because Japanese courts don’t allow for class-action cases or punitive damages, and partly because of a five-decade-old nuclear-accident law limiting liability to the plant operator.

More than nine of 10 evacuees who say the disaster harmed them have taken their claims directly to Tepco.

But the Watanabe family pressed ahead. Even as the case proceeded, the chief judge advised both parties to settle but the Watanabes refused, asking the court to clearly state “Tepco’s responsibility,” according to local reports. Two similar cases are still going on, filed by bereaved families in Soma City and in Namie Town, both in Fukushima prefecture.

Citing Cabinet office data, NHK, the broadcaster, reported Tuesday that there had been 130 suicides in nine prefectures between June 2011 and July 2014 that could be linked to the 2011 earthquake and the nuclear plant accident.

Fukushima, which bore the brunt of the disaster, accounted for 40 percent of the suicides, which have been going up, not down, in the years following the disaster. Ten people killed themselves in 2011 but 23 took their own lives last year, NHK reported.

Separately, a study released on Monday suggested an increase in the number of children in Fukushima who had been diagnosed with thyroid cancer, which can be linked to exposure to radiation but has not, in this case, definitively been traced back to the nuclear accident.

The study, by the Fukushima prefecture government, said that 57 children younger than 18 had now been diagnosed with the disease.

The government is cautioning against making the link between the diagnoses and the triple nuclear meltdown, pointing out that the rate of thyroid cancer in the general population is not known, and these cases could simply be the result of the intensive screening that has been taking place in Fukushima.

Anna Fifield is The Post’s bureau chief in Tokyo, focusing on Japan and the Koreas. She previously reported for the Financial Times from Washington DC, Seoul, Sydney, London and from across the Middle East.