In Brazil, women are fighting against the sexist impeachment of Dilma Rousseff

Women’s rights and gender equality is supported by

When she was president, Dilma Rousseff’s administration did not always generate solidarity between feminists. There was often a marked line between those who tried to work with her government on developing better public policies and those who rejected her administration, citing the lack of advances in reproductive rights, in the political sphere and in education during her term.

However, almost all feminists agree that her impeachment was sexist and discriminatory. Not only have many male politicians been found to have practised pedaladas fiscais – using public bank funds to finance federal or state social programmes, apparently without any consequences, but those who voted for her impeachment are being investigated for corruption for personal gain. Although independent auditors have found Rousseff had no involvement in pedaladas fiscais, few believe she will be exonerated in the impeachment trial.

Since Rousseff’s impeachment, thousands of women across Brazil have come together to express solidarity with her. New movements, such as Mulheres Pela Democracia (Women for Democracy), have sprung up in support as women have marched in protest and even sent Rousseff letters and pictures empathising with the injustice of her ousting, and warning of its future implications.

The most conservative congress since the end of Brazil’s military dictatorship is now responsible for both the political coup and the growing attacks on women’s rights.

Prior to the impeachment, politicians on all sides had passed a raft of bills chipping away at women’s rights, including a bill to define personhood from the moment of conception, and another to define “family” in the constitution as the union of a man and woman and their child. Other bills were introduced to prohibit the discussion of gender in the National Education Plan, and to further criminalise legal abortion for victims of rape. There were moves to make it difficult to access emergency contraception, and to increase the penalty for abortion in the wake of the Zika virus.

At the same time, none of the old problems went away: violence against women is still endemic, and there is widespread acceptance of sexual violence in society. More than 1 million women undergo illegal abortions every year.

Over the past year, however, women have been fighting back in much greater numbers and with renewed vigour. In October, during what has been dubbed Brazil’s “feminist spring” (Primavera das Mulheres), hundreds of thousands of women protested on the streets and through social media against sexual violence, paedophilia, and the sexist bills aiming to limit their reproductive rights.

Younger women and girls are using social media and technology to become informed, debate and mobilise on women’s issues. They have declared their support for feminism through internet-based campaigns such as #MeuPrimeiroAssedio (My First Assault) and #ForaCunha (Get Out Cunha – aimed at removing the politician Eduardo Cunha, seen as Rousseff’s accuser-in-chief), which garnered hundreds of thousands of likes and tweets on Facebook and Twitter.

Last month, hundreds of thousands of women united across Brazil and Argentina under the banner: Por Todas Elas (For All Women), protesting against rape culture, after 33 men allegedly gang-raped a 16-year-old girl in Rio de Janeiro in May.

Between October 2015 and January 2016 alone, the search for the word “feminism” on Google in Brazil rose by 86%. More women have begun to identify themselves as feminist, and even begun introducing new vocabulary, such as the word “sorority”– which does not exist in Brazilian dictionaries and was virtually unheard of until 2015 – to describe solidarity with other women.

Agora Juntas, a group of feminist collectives and women in Rio de Janeiro, which I founded, is building a feminist hub to encourage greater collaboration and solidarity. Many feminist groups are under-resourced, and compete for what little funding there is. 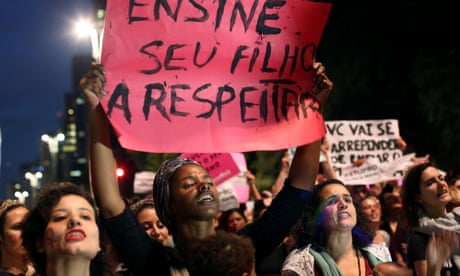 Brazil and Argentina unite in protest against culture of sexual violence

Unfortunately, despite the increased feminist mobilisation, the situation is still bleak. Michel Temer’s new governmenthas gone backwards in terms of the rights of women and minority and indigenous groups. Under his all-white, all-male administration, politicians are attempting to undermine the Maria de Penha law, which was a landmark victory to increase domestic violence convictions and support victims. They have submitted a bill to give police powers to approve protective measures for women; at the moment the judiciary is the only body that has these powers.

Nevertheless, the final insult for women has been the Temer administration’s appointment of the conservative Fátima Pelaes as the secretary of politics for women. Pelaes has previously declared that she does not support abortion as a legal option for women who have been raped. Perhaps it is no surprise to learn that since his interim government assumed power, the World Economic Forum has calculated that the country will fall from its 2015 ranking of 85th in the WEF gender equality index to number 107.

In an essay, The Patriarchal Coup, Maria Betânia Ávila, sociologist, researcher of SOS Corpo Instituto para a Democracia, and member of Articulação de Mulheres Brasileiras, writes: “The feminist movement [in Brazil] is showing its capacity for resistance and mobilisation in defence of the first democratically elected female president’s mandate and democratic legality. This is a confrontation with the patriarchy, with male chauvinists and neoliberals.”

Amid the cries of “Fora, Temer!” (Out with Temer), feminists are reminding Brazilof the need to re-instate Rousseff, and to ensure that future governments implement reforms and public policies that guarantee human rights and social dignity, and combat inequality. Until then we will continue to shout: “Without women, there is no democracy. Without feminism, there is no democracy.”https://www.theguardian.com/global-development/2016/jul/05/in-brazil-women-are-fighting-against-the-sexist-impeachment-of-dilma-rousseff