In India, narratives are manufactured with an eye on power; there is a need to document history: Aruna Roy 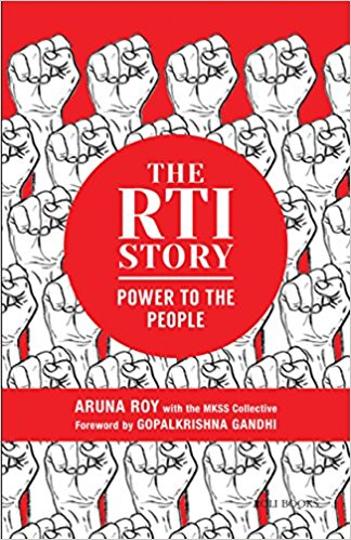 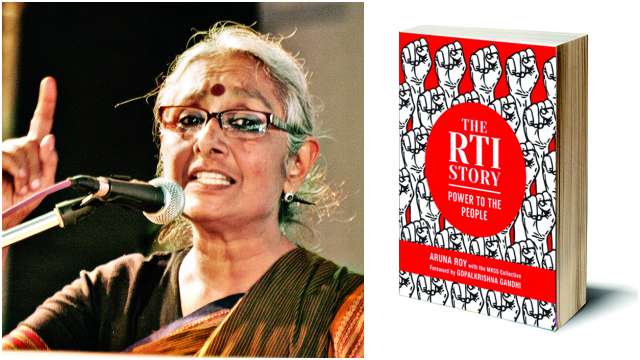 One of India’s leading political and social activists Aruna Roy’s seminal book The RTI Story: Power to the People (TRS) is having its Mumbai launch as a part of a Literature Live! The Magsaysay awardee was spoke to Yogesh Pawar about the book, the movement that inspired it and the current sociopolitical climate

In a country where collectives, issues and principles get their due, the small granite slab in the market square at Beawar, Rajasthan, installed in 2016, was for the longest time the only tribute to the Right to Information Act (RTI) of its kind. Is The RTI Story (TRS)… going to change that?

The RTI Story (TRS) only adds to the 60-80 lakh voices raised in tribute every year! Often English-speaking, middle-class voices are the only ones amplified. Many who struggle patiently, persistently and imaginatively are forgotten. These are stories that live in a fast diminishing oral history, which, for the most part, provided colour and inspiration for action and reflection. This book is an attempt to collate such untold stories.

As unique as the book and the RTI movement which inspired it have been the launches. Tell us more.

I was always asked, “Why don’t you do something more creative?” I’ve tried to tell people that creativity is not boxed into “art” alone. A dharna/protest is creative, and has to be able to sustain energies and communicate with multiple expressions, with seriousness and fun. The first launch in Beawar was “Guru Dakshina,” a tribute to the people in the villages around Beawar and Bhim, and those in the town of Beawar, who lived the dharna through for 40 days with us in 1996. The launch was a tribute to the people of the city who watched , made tentative gestures and finally became a part of the RTI struggle. Our editor said that she’d never been to such a book launch before. “I’ve seen book launches with cocktails. But this beats them all – a launch with a dharna.”

The launches have created space to return to the history of the movement, to celebrate it, and think of the “achche din” that were, and to discuss and reflect on the current political climate, the challenges and the path ahead.

Do you see TRS… primarily as course content for social work/ public administration schools or as a template for other national movements to take a cue from?

TRS… could be both or neither. The RTI movement is one movement in the rainbow of various different people’s movements fighting for social justice and equality. But some people see it as a manual, because of the causality recorded, explained and shared.

Was the use of the third person deliberate in the way you chose to write the book?

The third person is intended to make the narrator like the Indian sutradhar or the Greek chorus, a narrator and no more; to focus on story tellers and the movement’s narrative. It was a device, politically and in form, to give “correctness” to the perspective to the history of the RTI movement – to highlight its collective and collaborative nature.

How long have you been working on the book? Does its release in the current socio-political climate make it more significant?

Work on the book in this form has gone on for about three years. It became more and more imperative to write the narrative. We are oral historians. Oral history had a moral context. In contemporary India, narratives are manufactured with an eye on power and electoral processes. The current political climate created the need to write. To challenge the dominant narrative of sectarian politics and centralised power. For instance in 2016, the history of the RTI Act, including its emergence from the MKSS and the village of Devdungri, was erased and removed from the textbooks in Rajasthan.

This book presents peoples’ history, in the living memory of many, which can’t be erased so easily, and which bears testimony to decentralisation in creating policy, legislation and finally in a dialectic between implementation and law making. It is a statement with source and context of the contribution of people; in particular the rural people of Rajasthan and their interaction with many others, to make one of its greatest laws. Centralised and unaccountable power requires the creation of a dominant narrative in an attempt to control a people and a nation. This book will hopefully be a small assertion of the opposite; that contribution of peoples’ struggles make decentralisation a creative reality, and has depths of theory and policy built into it.

The RTI movement led by you has had a very long and difficult journey. What were the biggest challenges in putting the book together?

A huge collection of old records and dusty files and gathering together the history of the MKSS and the RTI struggle involved dozens of people. The biggest challenge was condensing and transforming this wealth of information into a simple and readable story that anyone could read.

Can you give us a sense of how activism in rural Rajasthan centeredaround minimum wages and land distribution paved the way for the RTI movement?

In the pre-sanghathan days in Devdungri, one of the early protests was at Dadi Rapat, over minimum wages for the villagers in a season of drought. People wanted work in public works and were traditionally denied fair payment. Workers who chose honesty were penalised. Lack of transparency led to questions, and the right to seek records and proof. It grew into rallies and hunger strikes in Bhim a small town. Strategies to get public space to voice the demand for justice, culminated in a new tool which was the jan sunwai or people’s hearings . In these hearings, records obtained from government officials, were read out to prople. The records revealed massive corruption in the works programmes and the Right to Information movement began to gain momentum after the first public hearing in Kukarkheda, 1994.

The movement for a national Right to Information and for the Right to Work (enshrined in the Mahatma Gandhi Rural Employment Guarantee Act) have always walked hand in hand, as the initial demands for the RTI were embedded in the demand for work, wages and livelihood.

The RTI movement brought together many streams of thought. Was it difficult at times to bring inherent contradictions/differences together on the same platform?

Any movement contains multitudes of thought, philosophies, voices and people. The MKSS solved this with locating the RTI within the Constitution and those who cherished the promises we made to ourselves in its Preamble. Those who didn’t support those basic values got pushed out. Others learned to work with dissent/differences, within the non-negotiable. Today there are still multitudes who own, use and shape the RTI and our understanding of it; giving it new meaning and depth every day.

While some say RTI equally empowers and liberates bureaucrats from the stranglehold of those in power, others see bureaucrats stonewalling attempts to access information. Your view.

There are different sides to this as you say. For many bureaucrats, RTI has become an important way in which they themselves can legally and safely share information with citizens and remain accountable to people they’re bound to serve. There are those still afraid though they are protected and in fact required to by the law. And there are still others who see information as power, privilege and control. RTI is a both personal and political tool. It retains individual interpretations within the larger common good.

Many fear the attempts afoot to water down the RTI…

Each government, including the very government that passed the RTI Act has feared it, and tried to amend/water down its provisions within six months. The RTI is one of our only laws that directly, efficiently and simply decentralises power, to place it in the hands of citizens themselves.

Some criticism has come the way of RTI over its abuse in political and corporate rivalries. How do we ensure that this doesn’t happen?

Every year 40-60 lakh RTI applications are filed across the country. It is one of the most widely used information laws in the world. Criticism of misuse for corporate and political rivalries is a red herring. Two national studies carried out in 2008 and 2014 by Satark Nagrik Sangathan (SNS) and RaaG gave statistical proof that less than 1% of the RTI applications analysed could be termed frivolous or vexatious. The study analysed orders of the Supreme Court and of various High Courts and information commissions. It also stated that the PMO acknowledged, twice, in response to RTI applications, that it had no actual evidence of misuse.

The current sociopolitical climate has shut the voluntary sector out of all dialogue. How does this affect public discourse?

The current regime practices obfuscation and misinformation. It loves power over citizens and can’t allow something like an independent, dissenting civil society to function. Public discourse has become overrun by the ideology of those in power who can’t bear to hear any voices other than their own.

If I ask you to pick one success story close to your heart of how RTI has touched lives which will it be?

The poor person forcing the privileged to cower in front of the typical Indian personified by RK Laxman’s Common Man in a generic sense. There are so many that a selection will betray the spirit of the book!