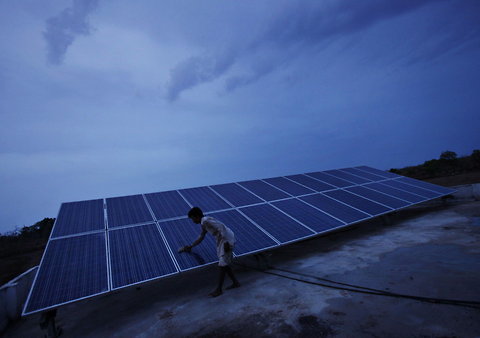 By DAVID FERRIS
After years of lagging behind China and the West in the adoption of solar power, some states in India are proposing to build solar farms at a galloping pace that leaves them at risk of falling short of electricity (a familiar problem here) or of paying higher prices for it.

By comparison, the entire nation of India currently has just over 1,000 megawatts of solar power, and California, the leader in solar power in the United States, has around 2,000. India has more than 300 sunny days a year and much of the nation lies near the equator — ideal conditions, geographically speaking, for harnessing solar power.

The central government has a goal of producing 22 gigawatts of solar power by 2022. Proponents say that solar energy might reduce the country’s dependence on coal, which is always in short supply, and slow the effects of climate change, including sea-level rise, which endangers the country’s coastal cities.

The national government, known here as the Center, intends to lean heavily on the states in working toward that target. And in the last few months a handful of states have emphatically responded.  “The momentum is shifting from the Center to the states,” said Vineeth Vijayaraghavan, who publishesa newsletter on the Indian clean tech industry.

Recent events in Tamil Nadu underline the risks of trying to build out solar power too quickly.

Rolling blackouts are a fact of life here because of a 4,000-megawatt deficit in power production. In response, the government announced in October that it was seeking bidders to build 1,000 megawatts of solar power each year until 2015.

Tamil Nadu modeled its bidding process after one that worked out strongly in the central government’s favor. In 2011, the center sought bids for solar power and was overwhelmed by suitors — it received 5,000 megawatts’ worth of proposals for 1,000-megawatt projects. The government held a novel reverse auction that made solar developers compete with one another to see who could sell power to the state more cheaply. The resulting rates saved the utility and its customers significant money.

Tamil Nadu introduced its own 1,000-megawatt offer last October, and initial interest by solar developers was intense. But some companies grew wary when they examined the fine print. Rules were vague about when payments would be made; the state’s power distributor, known as Tangedco, is in poor financial health, which makes it harder for solar builders to secure loans; and the utility took no responsibility for transmitting the electricity that the developers created.

Furthermore, the projects had to be unveiled at a punishing pace: companies had to acquire land, line up financing, build the solar farms and switch on the power by the end of this year.

As of Friday’s deadline, the state had received bids for just 499 megawatts, less than half its target.

Energy officials maintained in a press report that the response was “by no means discouraging.” But Tobias Engelmeier, the managing director of Bridge to India, a solar research and consulting firm, said that since many of the bids won’t meet the state’s criteria, Tamil Nadu may end up getting only 150 megawatts of solar power this year.

“I think that Tangedco was expecting a lot more enthusiasm,” said Madhavan Nampoothiri, a solar consultant in Chennai, Tamil Nadu’s capital. “They weren’t able to allow an extension, and now they’re going to have to.