In Lucknow jail , 6 activists to spend New Year under arrest 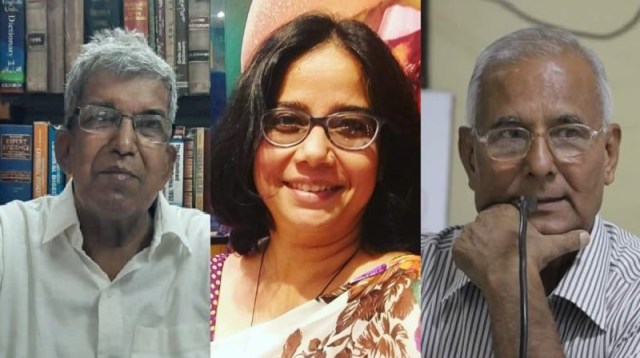 Bail pleas were filed in the sessions court of Lucknow for teacher-artist-activist Sadaf Jafar, former IPS Officer SR Darapuri and five others on Tuesday. Jafar and others have been lodged in a Lucknow jail since 19 December, 2019 when she was arrested while capturing videos of the protests taking place at Parivartan Chowk in Lucknow as aprt of the Anti-CAA protests. Since then, a delegation of Congress members, including senior leader and Congress state president Ajay Kumar Lallu, have met Jafar.

Confirming the allegations of torture in custody, Lallu said, “She (Jafar) had been beaten in a barbaric manner. Her hair was pulled, she was punched in the stomach and hit on the legs. Her wounds were still showing.” Medical help, however, is yet to be provided to her and others who were beaten up while they were in police custody.

In a moving Facebook post, Siddharth Darapuri, SR Darapuri’s grandson, wrote, “Loved by his juniors and seniors, he was a person who did not shoot a fleeting miscreant at point blank range, even after the person fired at his jeep. He was a person, who went alone to make a gang surrender, and not finish them off in an encounter. He revolutionised the police-mess, which was marred and divided on caste lines. Never did he fire a single bullet from his service revolver… He was smiling behind the bars, he was smiling when the police took him away. We love him and I will never let anyone take the light behind his eyes.”

Speaking about the future course of action, Lallu said, “We are very serious about Sadaf’s release. We are constantly raising this issue in the Parliament and also on streets. Congress has been against the Citizenship Bill since the beginning and we have burnt the copies of the bill in every meeting held since. We have also sent delegations to the District Magistrate (DM) and Director General of Police (DGP). We are demanding a judicial inquiry into the whole matter.”

Previously, a report quoted the SHO of Hazratganj police station, who confirmed her arrest and said that she was arrested along with “violent protesters”, added, “We have sufficient video evidence of her involvement in the protest on 19 December. She can appeal against her arrest in court.” The Magistrate court had rejected Sadaf’s bail appeal on the grounds of the charges being “serious” in nature.

Now, it seems that all the protesters will be in for at least a week in harsh weather conditions and amid concerns for their safety and well-being. PM Modi, who is in Lucknow for a two day visit, didn’t comment on the high-handedness of Uttar Pradesh police, and asked the protesters to check their actions, for which he was trolled.

Regarding the allegations against her sister Sadaf, Naheed Varma said, “My sister is a single parent. The state machinery should release her as she never resorted to vandalism. She was protesting peacefully”

Sending her solidarity message from Jail, Sadaf said, “I am against the CAA and will continue my fight against the Act even after I am released.”

The author is a researcher and writer working on forest and agrarian rights, gender-based violence and human rights issues. Twitter: sushmitav1

In India -2020 Witnessed the Deliberate Destruction of Democratic Rights Organizations
First death penalty in a drug crime case
Iraq hangs 42 convicted on terrorism charges #deathpenalty #abolishDP
India’s shame is not Covid 19 but the fact that we do so little to provide healthcare even in norm...