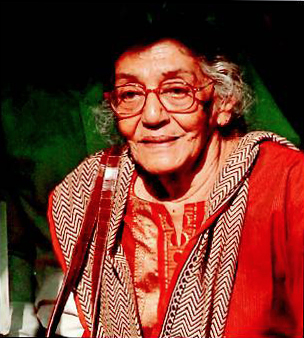 Professor Lotika Sarkar who played a central role in several path-breaking and crucial legislations for gender justice and empowerment of women during 1975-2005, passed away at the age of 90 on 23rd February 2013. In the women’s rights movement, she was known as Lotikadee.

When other stalwarts of women’s studies touched our hearts with inspirational speeches in the women’s movement gatherings, Lotikadee floored us with her legal acumen. The first Indian woman to graduate from Cambridge, Dr. Lotika Sarkar was the first woman to join the law faculty at the University of Delhi. She taught Criminal law and was a mainstay of the Indian Law Institute, Delhi during 1980s and 1990s. She was a member of the Government of India’s Committee on the Status of Women in India and a founding member of several institutions—the Indian Association for Women Studies (IAWS) and the Centre for Women‘s Development Studies (CWDS).

Lotikadee was in the peak of her career, when she was asked to join Committee on Status of Women in India, 1972 that prepared Towards Equality Report, 1974. As a pioneer in the fields of law, women’s studies and human rights, she prepared the chapter on laws concerning women in the Status of Women’s Committee Report with gender sensitivity and analytical clarity to promote women’s rights.

Along with three law professors of Delhi University – Prof. Upendra Baxi, Prof. Kelkar, Dr. Vasudha Dhagamwar, Lotikadee wrote the historic Open Letter to the Chief Justice of India in 1979, challenging the judgment of the apex court on the Mathura rape case. I remember cutting stencil and making copies on our cyclostyling machine of the 4-page long letter for wider circulation. Translation of this letter into Gujarati and Hindi served as a crash course in understanding the nuances of criminal justice system, rape laws and sexual violence as the weapon to keep women in a perpetual state of terrorization, intimidation and subjugation. It resulted in birth of the first feminist group against rape in January, 1980 – Forum Against Rape.

In 1980, along with Dr. Veena Mazumdar, Lotikadee founded Centre for Women’s Development Studies. When Lotikadee came to Mumbai for the first Conference on Women’s Studies in April, 1981 at SNDT women’s University, we, young feminists were awe-struck! Ideological polarization in this conference was extremely volatile. Lotikadee’s commitment to the left movement did not prevent her from interacting meaningfully with liberals, free-thinkers and also the new-left like me. Indian Association of Women’s Studies was formed in this gathering. In the subsequent conferences, Lotikadee attracted innumerable legal luminaries to IAWS.

At the initiative of her students, Amita Dhanda and Archana Parashar, a volume of Essays, Engendering Law: in Honour of Lotika Sarkar was published in 1999 by Eastern Book Company, Delhi.

Lotikadee and her journalist husband Shri. Chanchal Sarkar were kind, generous and trusting. After her husband passed away she was under immense trauma and grief. Taking advantage of this situation, her cook and a police officer whose education she and her husband had sponsored, usurped her property and house. Her students, India’s top lawyers and judges mobilized support and signed an open letter studded with such names as Justice V.R. Krishna Iyer, Soli Sorabjee, Gopal Subramaniam and Kapila Vatsyayan. Jurists, advocates, academics, bureaucrats, journalists and human rights activists signed the open letter demanding justice for her. Finally, Lotika Sarkar’s property and assets was transferred back to her to allow her to live her life in peaceful serenity, which she so deserved. Lotikadee’s traumatic experience invited serious attention on safeguarding the rights of senior citizens by both state and civil society.

Lotikadee was a conscience keeper not only for policy makers and legal fraternity but also for the women’s studies and women’s movement activists. The most appropriate tribute to Lotikadee is to proactively pursue the mission she started with her team in 1980, to fight against rape and various forms of structural and systemic violence against women and to strive for social justice, distributive justice and gender justice. The resurgence of activism against sexual violence and feminist debate around Justice Verma Commission’s Report as well as Criminal Law (Amendment ) Ordinance, 2013 constantly reminds us of the pioneering work of Lotikadee in terms of creating a strong band of committed and legally aware feminists who are following her footsteps. Let us salute Lotikadee, torchbearer of gender justice by continuing her heroic legacy.

Vibhuti Patel is active in the women’s movement in India since 1972 and currently teaching at SNDT Women’s University, Mumbai.