“In our 47 years with the tribals we have never come across rape; they may go hungry but never steal” – Dr Prakash Amte 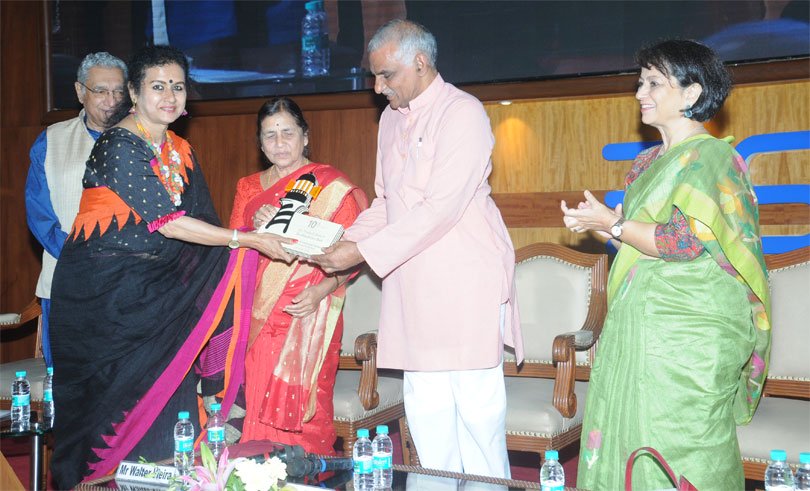 “Working with Madia Gond for over 47 years is an eye opening journey for us. We did help them to join the mainstream, but at the same time learned how life can be enjoyed with simplicity and without expecting anything in return,” says renowned social workers Dr Prakash Baba Amte and Dr Mandakini Amte. They were speaking at Moneylife Foundation’s 10th Anniversary function at Mumbai.

Elaborating on “Odyssey of Community Service: A Personal Reflection”, Dr Prakash Amte says, “Our second patient was brought on a bed (khatiya) and left by carrying the bed on his back. He neither looked back nor uttered a simple thank you to any of us. At that time we felt bad. But then after learning about their lifestyle, we realised, this is a community that stands for each other. When someone is need, all he or she has to do is ring the bell and everybody chips in helping. In return this person too helps others. So there is no thanksgiving in their lives. We are also doing the same and do what ever we can without any expectations.”

“During all the years we are working with the Adivasis, we never came across a single rape case. They would remain hungry, but would never steal. And when someone needed something the entire community stands behind the person and helps. Not to forgot the great tolerance these people have, which is rare among the people who live in the cities, ” he added.

According to Dr Mandakini Amte their work is result of a teamwork. She also shared several touching moments from her lives together. Describing her marriage with Dr Prakash, she says, “Love is an accident, but what followed is more of a positive, well-lived life. I was doing my post-graduation in anaesthesia in the Government Medical College (GMC) at Nagpur, while Dr Prakash was pursuing his post-graduation in general surgery in the same college. We met for the first time in an operation theatre and then decided to get married. Baba (Amte) called me over to Anandvan and asked if I was ready to live with Prakash in a jungle for the rest of my life. When I assured him that I was, he gave his consent.” Recounting their initial days, Dr Mandakini says, “Our first patient was a 10-year boy, who was almost 40% burnt due to epilepsy. The Adivasis had tried to treat him with their regular ‘mantrik’ but it failed and the boy was left alone to die. We requested the Adivasis to allow us to treat him, which they readily agreed to. We cleaned his wounds, wrapped bandages and gave him antibiotics for two-three days. Since this was the first time in the boy’s life to get an antibiotic, its results were fast and very good. He was fully cured.”

Quoting Baba Amte, Dr Prakash says, “My father had a very simple definition of social work and life. He followed only one religion, the religion of humanity and serving needy people. Baba had no political philosophy and thus he used to meet people from all political ideologies with ease. We too follow the same principle. Simplicity is the mantra that we follow at Hemalkasa, and Anandwan.” “We need more dedicated workers to build a humane community where people can live in peace and harmony. We need to build bridges between the haves and have-nots, in every sphere,” the Ramon Magsaysay-awardee added.

Both Dr Prakash and Dr Mandakini Amte are well known for their philanthropic work, Lok Biradari Prakalp, in the tribal areas of Gadchiroli district of Maharashtra. They now run, a school of 350 students, and tend injured wild animals.  The famous biographical film “Dr Prakash Baba Amte: The Real Hero” starring Nana Patekar and Sonali Kulkarni is based on their life story. Dr Amte shared the story of how his journey started. He said that the idea of setting up a centre for the tribals of Gadchiroli had taken root in Baba Amte’s mind when he saw that huge social injustice was being done on them by the government. Baba required someone who was dedicated and willing to stay in the area, preferably a doctor.

He mentioned how in 1970, Baba took him to the forest for a picnic. “What you see at Hemalkasa today is outcome of that picnic,” he says. Dr Prakash knew his father well and realized that Baba was testing him. He promised Baba he would work for the tribals. Thus a young surgeon studying in his second year of post-graduation left his college and entered the forest, never to return and make his work internationally-known. The work was started modestly with the only objective to somehow survive for the day, however he has walked a long road and reached where he never sought to reach. Thus, Lok Biradari Prakalp (LBP) was established in 1973.

He explained how Madia Gonds were virtually cut-off from the outside world; their only contact was with unscrupulous forest contractors and forest guards who exploited them, ruthlessly. When Dr Prakash Amte first came to live in the forest in 1973, he had trouble even approaching the tribal people. The tribals would run away in fear as soon as they saw him in his modern clothes. Any person wearing modern clothes was only there to exploit them as far as they were concerned. To gain their trust, he decided to shed his modern clothes and dress like them. The most challenging part of our work in those days was to diagnose a patient without any investigations. Dr Prakash Amate says, “There was no electricity, so the question of X-Ray machine or any other diagnostic equipment was out of question. I was surgeon, while (Dr) Manda was anaesthetist, and had no knowledge about treating other diseases. But problem was either we treat the patient or he/she would die. So we studied books to learn treatment of various ailments and treated the Adivasis.

“We treated one patient who was attacked by a bear. His skullcap was fixed with about 100 stitches and after few days, he recovered. However, in the attack, the bear had punctured his eyes and we had no cure for this. The patient left Hemalkasa. After few months, we equired about him since he was saved and completely recovered from ghastly bear attack. We were told by the Adivasis that he died as he could not gather or get sufficient food due to his blindness from the bear attack,” he added.

Blindness, especially from cataract was a major problem and used to be a threat to life for the Madia Gonds. “We then learnt to do surgical procedures for cataracts because a blind person was a liability in the family and would die due to lack of food.”

“The testing moment during our initial days was when Digant, our son, became unconscious and started having convulsions. It was very difficult to treat our own son without investigations or specialist facilities. Somehow, we made a probable diagnosis and treated him. Since we had treated similar patients earlier, we diagnosed it as cerebral malaria. He regained consciousness after a few hours, but later, developed focal epilepsy and had to be on anti-epileptic medication for the next seven years. May be it was due to delay from our side in diagnosing and treating him in time. But today, Digant is a doctor and along with his wife Anagha, a gynaecologist, are looking after the Lok Biradari Hospital” Dr Prakash Amte says. In 2008, Dr Prakash and Dr Mandakini Amte received Ramon Magsaysay Award for Community Leadership.

The citation of the Award states: “In electing Prakash Amte and Mandakini Amte to receive the 2008 Ramon Magsaysay Award for Community Leadership, the board of trustees recognizes their enhancing the capacity of the Madia Gonds to adapt positively in today’s India, through healing and teaching and other compassionate interventions.” NOTE: For more details on donation for the exemplary work of the Dr Amtes kindly visit http://anandwan.in/donate.html