In the heart of Kashmir, CRPF battalion asked to salute Bappa #WTFnews 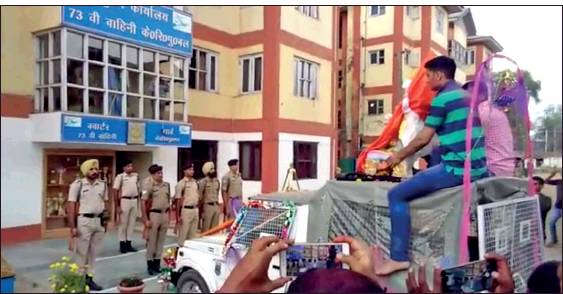 Video goes viral; Commandant blames ‘overzealous’ jawans
Inquiry to be instituted to find out who ordered the guard of honour. ‘Corrective measures’ promised

An inquiry will be ordered into a guard of honour offered to a Ganesha idol at the headquarters of the 73rd battalion of Central Reserve Police Force (CRPF) in Kashmir last Thursday.

The video of seven jawans lining up for the guard of honour as a Ganpati idol is wheeled in amidst chants of ‘Ganpati Bappa Morya’ has gone viral in CRPF circles, raising questions about the rationale behind getting uniformed men to salute an idol of a god.

The incident occurred at the headquarters of the 73rd Battalion of CRPF at PHC Bemina on the National Highway number one in Srinagar, Kashmir. Mumbai Mirror is in possession of a copy of the video.

While CRPF takes pride in being a secular force and festivals linked to all religions are celebrated at its camps, offering a guard of honour to a god is unheard of.

Late on Wednesday, Commandant P P Pauly put the incident down to “overzealousness” and said he will institute a probe to find out who ordered the guard of honour. “Corrective measures will be taken,” Commandant Pauly said.

A senior serving CRPF officer, who did not wish to be identified, said gun salute to Ganpati was in violation of service rules. “The gun salute is reserved for senior officials and dignitaries. You cannot line up jawans to salute an idol in a religious ceremony,” he said.

Commandant Pauly said the Ganpati idol was not brought in as part of an official function nor was the guard of honour authorised by any senior officer. “Such regimental functions are jawans’ own initiatives and are organised across a spectrum of religions. In this case, the jawans overstepped,” he said.

Though Commandant Pauly said a guard of honour at a religious function was not part of any CRPF protocol, he said since the incident was a result of overenthusiasm of some jawans nobody has been penalised.

CRPF’s 73rd Battalion is administratively handled by the western region based in Belapur, Navi Mumbai. It is headed by IPS officer Raj Kumar. Calls to Kumar’s landline number went unanswered. CRPF PRO, western sector, Kishore Kumar Rao said he was not aware of the incident.

D G Pathak, who retired as DG of the Border Security Force, said, “Generally, such things are not done. There is no specific mention of such situations in the conduct rules, but if one is to judge it by the standard of general impropriety, then what took place is not appropriate. The paramilitary forces celebrate all festivals cutting across religions, but there should not be a formal salute to an idol. They seem to have gone beyond what is usually acceptable.”

1 Year of NaMo Govt - What they promised and what they delivered
#India - Before going to Vote listen to Muck Fodi #Hiphop #NaMo #Feku
#Sundayreading - Trial By Fire: Inside An Under-Trial Prison
How Austerity Kills the Public Health System