The world is interconnected and interdependent, as he has himself said so often and he repeated on Saturday. PTI Photo

In his speech, Modi made much about the freedom struggle though, of course, his Sangh Parivar had abstained from it 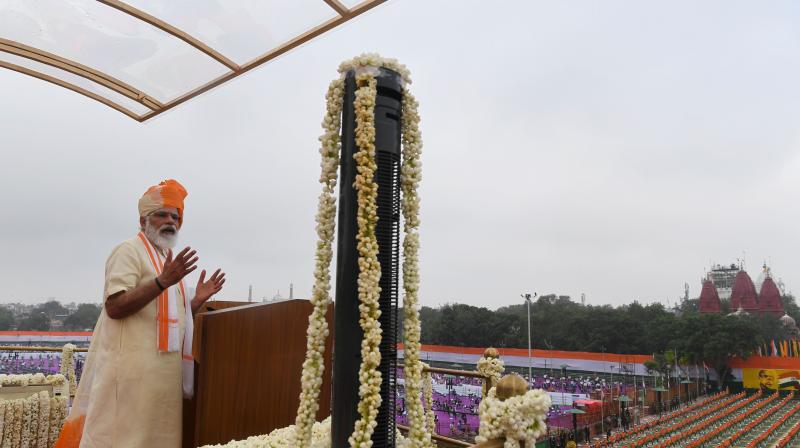 Prime Minister Narendra Modi made the usual speech from the Red Fort for Independence Day. I think it was a good speech as his fans have come to expect from him; I can say with certainty that it was a long speech.

He is an entertaining speaker for some (not for me, because I like intellectual material, and his style does not appeal to me). Certainly, he speaks a lot.

A former Australian high commissioner to India, Walter Crocker, wrote a biography of Pandit Jawaharlal Nehru in which he observed that Nehru sometimes spoke three times a day.

Modi is like that in some ways, though the content is not the same. I stopped watching Modi speak a long time ago but thought it was important to hear him on Independence Day. This is what I observed.

Modi unfurled the national flag and saluted, which I didn’t think he should have done. The salute is a military gesture and civilians should abstain from it. Defence minister Rajnath Singh did not salute with the Prime Minister, which I thought was the right gesture.

In his speech, Modi made much about the freedom struggle though, of course, his Sangh Parivar had abstained from it. Perhaps he was speaking for the others who participated, though he did not mention the Congress or its leaders.

He also made some historical errors in his explanation of the freedom struggle, which we can explain away as his usual lyrical flourish.

He said he bowed to the Covid warriors. I am not sure if Modi knows that six lakh Accredited Social Health Activist (Asha) women are on strike, being paid only Rs 2,000 per month and not given protective clothing while doing their contact tracing work.

Last week, Amit Shah’s police in Delhi filed an FIR for against them for protesting.

Perhaps Modi does not know. Television news channels do not report such things as much as they do Bollywood suicides.

He spoke again of Atma Nirbhar Bharat, without explaining what it meant or how it was different from the licence raj and 1970s-style import substitution, which has demonstrably failed.

The world is interconnected and interdependent, as he has himself said so often and he repeated on Saturday. He said something about finished goods and value addition (finance minister Nirmala Sitharaman looked suitably stricken when he said this).

But there was nothing of any depth. But it is fine not to expect details and granularity from him because that is not Modi’s style.

I wish however that he had told us why our economic growth had been declining for 10 consecutive quarters and this year our GDP will contract.

He said we were blessed with natural wealth but didn’t say why his new environmental policy was eroding safeguards to protect this wealth.

He spoke about India importing wheat in the past, which had changed. Perhaps he did not know that this was because of an American scientist, Norman Borlaug, and his work on dwarf wheat which led to the Green Revolution here.

He said that we would win against the coronavirus. But how would this victory be achieved and what would it look like? What happened to the 21-day Mahabharat he said we would need to fight?

We are still fighting 130 days later, and in fact we have raced almost to the top of the global infected chart. Victory seems to be a hollow word.

He said many times that this thing or that thing could never have been imagined by anyone in the past. Perhaps he should have said it could not be imagined by him.

There was something about another ID card to add to our Aadhaar, PAN, Voter ID — that would bring better health.

He raised Kashmir but didn’t speak about its people. He said some delimitation work was on there and that it would benefit Kashmir’s chief minister and MLAs, but it may have slipped his mind that it doesn’t have either MLAs or a chief minister or statehood.

He said not one word about the Kashmiris he has locked up and denied connectivity.

He was evasive about China. He raised his voice even louder and began screaming about India’s unity and sovereignty.

He spoke about 20 jawans in Ladakh but he couldn’t even name China. He said the world had seen what had been achieved, though even we Indians don’t know because Modi has himself said nothing had happened and nobody had come.

All in all, it was like reading a laundry list or shopping list. There was no substance and no focus on a subject that could have been spoken about at length. How will we manage the recession in which millions of us currently on the cusp are likely to slip back into poverty? How will migrants get back to cities when rather than 16,000 daily trains only 260 special ones are running? What will happen to middle class urban individuals who have to pay rent and school fees and have lost their jobs?

It may have been a lot better for him to spend time on that rather than just reel off a list. Perhaps he has left that for his next speech, though I don’t really plan on listening to it.

7 months Pregnant Gang Rape Survivor approaches Gujarat HC for Abortion
One year of Bhima-Koregaon case: One FIR, many arrests and politics of a State at war with the peopl...
If only we had more Rekhas... #Vaw
Now that Owaisi is in jail, how about Praveen Togadia? #hatespeech