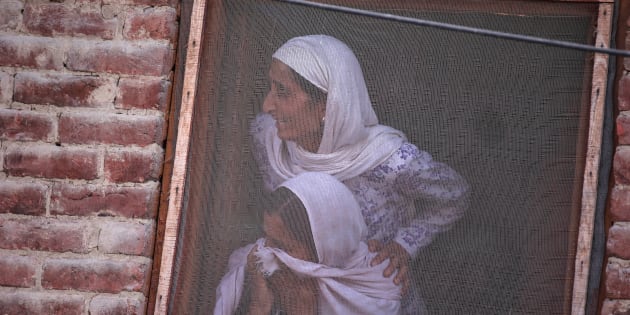 DANISH ISMAIL / REUTERS
Kashmiri women watch the funeral of Muzaffar Ahmad Pandit, a civilian, who according to local media succumbed to injuries from pellets fired by Indian police during clashes earlier this month in Budgam, October 1, 2016. REUTERS/Danish Ismail

Many armed groups committed human rights abuses. While the Communist Party of India (Maoist) was suspected of extortion, abductions and unlawful killings in central and south India, armed groups in north east India are believed to have committed similar crimes. This included the killing of 14 people by National Democratic Front of Bodoland (I.K. Songbijit faction) in Kokrajhar in Assam.

Meanwhile, suspected members of the Jaish-e-Mohammed are believed to have attacked an air force base in the beginning of January 2016, killing eight people, including a civilian.

More than 56,000 crimes were committed against scheduled castes and scheduled tribes in 2015. These included denying Dalits entry into public and social spaces, according to the report. In 2016, Dalit student Rohith Vemula committed suicide, complaining of discrimination and abuse, leading to nationwide protests. Since then, the government has alleged that the student was not Dalit, but belonged to “other backward classes”.

Crimes against children rose by 5% in 2015 as compared to the previous year. An amendment in a child labour law by the Parliament that allowed some exceptions was opposed by child rights activists, who were concerned it would affect marginalised groups and girl children.

Many people were attacked by vigilante cow protection groups. These self-appointed guardians of cows beat up many people legally transporting cattle, and many of those affected were minority groups. Two Muslim cattle traders were found hanging from a tree in Jharkhand. Other violations included gangrape of women and forcing cattle transporters to eat cow dung.

Those from African countries faced racism and discrimination in India. While one Tanzanian woman was stripped and beaten by a mob in Bengaluru, another man from the Democratic Republic of Congo was beaten to death in New Delhi.

A coal mine was expanded in Chhattisgarh, resulting in grabbing of Adivasi land without their consent. In Gujarat, the government sanctioned land acquisition for several projects which led to forceful evictions of families living there. In Jharkhand, three men were shot dead for demonstrating against a power plant, while four others were killed in a separate protest against a coal-mine.

A former Manipur state police officer claimed that he had been part of more than 100 such executions. Meanwhile, in Uttar Pradesh, 47 police officers were convicted of extrajudicial executions of 10 men. Similar killings also took place in Chhattisgarh, Odisha, and Madhya Pradesh.

The government cancelled the registration of several civil society organisations which specifically prevented them from getting foreign funding, even after the UN claimed it was not in accordance with international law.

At least two journalists were shot dead allegedly for writing against the establishment. Another journalist was forced to leave her home and yet another was arrested for sharing a message mocking a police official.

Activists too faced intimidation, physical attacks and harassment. Several other journalists and activists were also arrested on false or politically-motivated charges, according to the report.

Dozens of people were killed in Jammu and Kashmir after protests following the killing of a young militant leader. Hundreds were blinded by pellet guns used by the police, and phone and internet services were suspended in the area. A Kashmiri human rights defender was stopped from travelling for a UN Human Rights Council session in Geneva and detained for over two months.

The cabinet approved a flawed bill on transgender people’s rights with a problematic description of trans people. Indians continued to fight for the decriminalisation of consensual same-sex relations.

More than 327,000 crimes were committed against women in 2015. Many of them belonged to marginalised communities. Women were allegedly sexually assaulted by members of the armed forces in Chhattisgarh.http://www.huffingtonpost.in/2017/02/22/these-were-the-12-major-human-rights-violations-in-india-in-2015/

FTII Row: Protesting students take to medium they know best — cinema
The Massacre: Over 30,000 workers of Paris were Killed
Why do our Courts have to talk about rape in a Honour 'izzat' framework ? #Vaw
‘Coriander’ has Aadhaar number/UID #thisisnotajoke