A group of present and past students of IITs across the country on Monday moved the Supreme Court to challenge the constitutional validity of Section 377 of the IPC that criminalises homosexual activity and other unnatural sex.

The petitioners belong to different parts of the country and are well-established in their professional lives. Some of them are scientists, teachers, entrepreneurs and researchers and are of different age groups.

Among the IITians, the youngest is 19-year-old and a student of IIT Delhi and the oldest graduated from IIT in 1982. The petition has been filed on behalf of LGBT alumni association of IITs, comprising over 350 members. Most of the petitioners, including two women and one transwoman, are recent passouts. 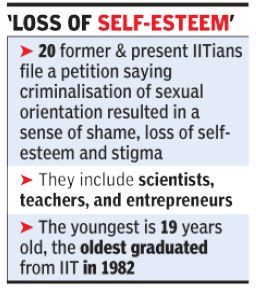 Ruling that discrimination on the basis of sexual orientation is “deeply offensive to the dignity and self-worth of an individual”, the apex court had earlier agreed to examine the constitutional validity of Section 377 of CrPC criminalising gay sex.

“Despite being among the brightest minds in the country, having graduated from top national institutions, with the best possible opportunities available in terms of career, they are nevertheless criminalised by the archaic colonial provision in Section 377 and are deprived of the rights and freedom guaranteed to them by the Constitution,” the petition said.

A group of 20 students, claiming to represent more than 350 LGBT alumni, students, staff and faculty from the Indian Institutes of Technology (IITs) said that the existence of Section 377 of the Indian Penal Code had caused them “mental trauma and illnesses, such as clinical depression and anxiety and relegated some of them to second-class citizenship”.

Coming from different parts of the country with diverse religious, age, sex, and other backgrounds, the petitioners said that Section 377 legitimises the stigma associated with sexual orientation and its expression—something which is essential, fundamental, intrinsic and innate to an individual.

Contending that the Section violates Articles 14, 15, 16, 19 and 21 of the Constitution, the petitioners said: “The silence of our legislative wing and its ineffectiveness to even consider debating the need for the existence of this law is shameful, to say the least.” “The stigma, silence and violence that the Section brings in its wake has led to some of us dealing with suicidal tendencies and some others attempting suicide in the past,” the petitioners said in a press note.

The group of over 350 LGBT IITians have come together through an informal pan-IIT LGBT group Pravritti which they say is a “safe space for us to interact, connect and network”.

Noting that despite having studied in the best scientific institutions and having worked with the best of the minds, the petitioner group said that Section 377 had left a “very deep impact on our lives”.

“One can only imagine the amount of suffering and pain that Section 377 has caused and continues to cause in the lives of LGBT individuals across the country,” the statement said.  — IANS

The legal battle against Section 377 spans over two decades. It has been spearheaded by Naz Foundation, an NGO working to prevent HIV/AIDS, which filed a petition in 2001.

In April this year, three separate petitions were also filed against the archaic law.

In 2013, the Supreme Court had struck down the Delhi High Court judgement of 2009 and effectively re-criminalised homosexual sex by upholding Section 377.

A total of 1,157 students, staff members from IITs across the country wrote an open letter to the government and the directors of the IITs, expressing their disenchantment against the judgement, the report added.

In a landmark decision in 2017, the apex court had unanimously declared the right to privacy a fundamental right under the Constitution.

A nine-judge Constitution bench headed by the then Chief Justice of India JS Khehar had ruled that “right to privacy is an intrinsic part of Right to Life and Personal Liberty under Article 21 and entire Part III of the Constitution”.

(With inputs from Hindustan Times)

Gujarat polls: Why Congress is all set to give BJP its strongest challenge ever
Punjab - SGPC objects and demands action against RSS for distortion of Sikh history
Gurmeet Ram Rahim Rape Case Verdict: Punjab, Haryana on Alert
No more ' Deaths; No More ' Delays' We want Trains and Buses Now !