Mumbai: The Bharatiya Janata Party (BJP), or a political alliance it is a part of, governs 18 of 29 states in India, home to nearly 63% of the country’s population. But only one BJP-ruled state, Himachal Pradesh, made it to the list of five best-governed states in India, according to a new study.

The public affairs index (PAI) 2018 developed by Public Affairs Centre (PAC), a Bengaluru-based think tank, evaluated state governance using 10 broad themes, 30 focus subjects, and 100 indicators, according to its website. These include law and order, economic freedom, environment, transparency and so on. This is the third edition of the index. The previous ones can be found here and here.

The top five states in the order of their ranking are Kerala, Tamil Nadu, Telangana, Himachal Pradesh and Karnataka. Of these, Kerala is governed by the Communist Party of India (Marxist)-led Left Democratic Front, Tamil Nadu by the All India Anna Dravida Munnetra Kazhagam (AIADMK), Telangana by the Telangana Rashtra Samiti (TRS) and Karnataka by a Janata Dal (Secular)-Congress combine.

These ranks are significant because BJP came to power on the promise of delivering development through its sabka saath, sabka vikas (development for all) campaign.

“The election manifesto, which revolves around the core issues of good governance and development, discusses in detail the party’s focus at tackling the concerns of price rise, corruption, black money and policy paralysis,” noted the prime minister’s website, narendramodi.in, the day his party’s election manifesto was released–April 7, 2014. 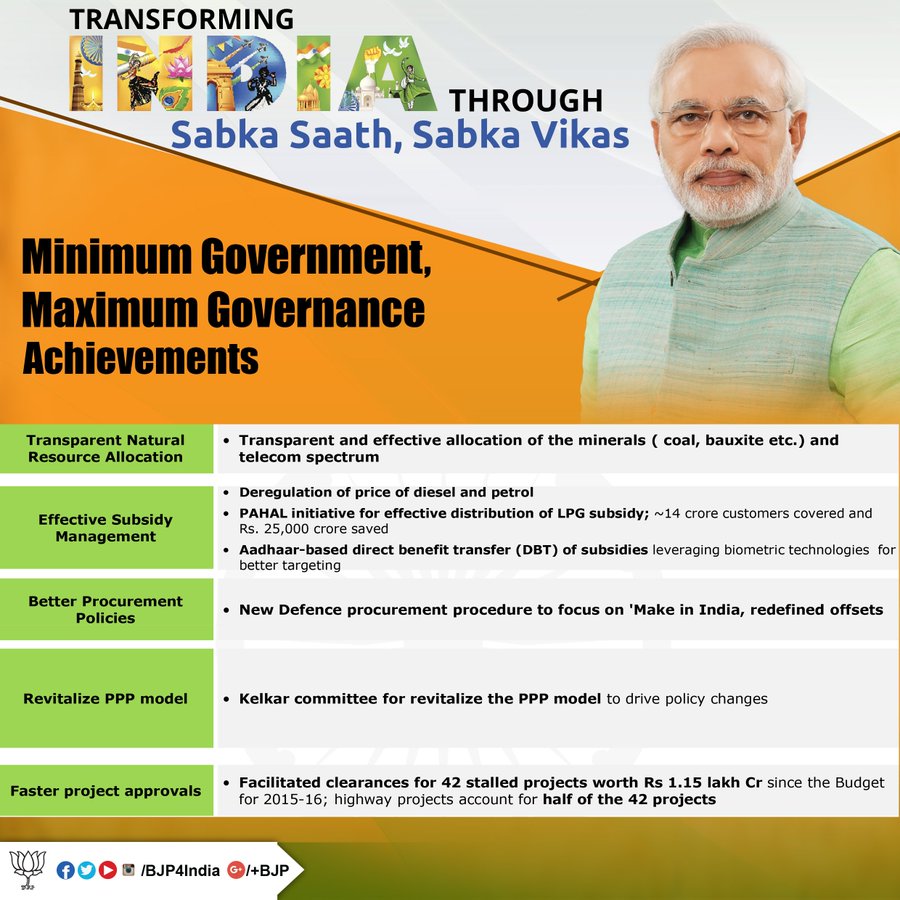 The PAI index has ranked 30 states, including Delhi. The aggregated rankings of the the top two states–Kerala and Tamil Nadu–have remained the same over three years.

“These [southern] states have been doing well historically,” Narayana A, faculty on governance at Azim Premji University, told IndiaSpend. “It may not be the presence or absence of the BJP that matters so much. The nature of politics may be a factor like the mobilisation of other backward classes and scheduled castes states like Kerala and Tamil Nadu.”

An enlightened or politically active population puts pressure on governments to perform better, he added.

Himachal Pradesh topped the list of small states. A state is classified as “small” if its population is less than 20 million.

Among the 18 large states (with population over 20 million), the top four were south Indian states, followed by BJP-governed  Gujarat and Maharashtra. Bihar languished at the bottom in the list of large states and the overall aggregated ranking.

BJP-governed states, led by Gujarat, have most economic freedom

“The theme of economic freedom explores the effort undertaken by the state governments to improve business environment in the state,” the report said.

Gujarat topped the list of five states that offer the most economic freedom while Maharashtra was ranked second. Telangana, placed third before Himachal Pradesh and Haryana, was the only state without a BJP government in this category.

“BJP has come to symbolise the economic and political right. They want to present the party as one which promotes business which makes it easy for investments to come in,” said Narayana.

The southern states may not do as well as Gujarat in ease of doing or promoting business but Tamil Nadu and Karnataka have done well in attracting foreign direct investment, Narayana pointed out. States like Jharkhand and Madhya Pradesh just provide land or speedy clearances but that makes for only “selective good governance”, he said.

India jumped 30 notches up in the top 100 rankings on the World Bank’s ‘ease of doing business’ index, thanks to major improvements in indicators such as resolving insolvency, paying taxes, protecting minority investors and getting credit, The Hindu Business Linereported on October 31, 2017.

Gujarat has consistently been ranked first for economic freedom since the PAI was first published in 2016. Bihar was ranked last among the large states on this aspect.

Tamil Nadu, Kerala and Maharashtra (in that order) have the best record in managing crime and maintaining law and order among the large states. Haryana and Jharkhand rank the last in this list. The top five safest states feature two BJP-ruled states, including Gujarat, and three governed by others including West Bengal.

This theme explored violence, atrocities, and policing including indicators such as rapes, murder, dowry deaths per 100,000 population among other factors.

As many as 39 crimes against women were reported every hour in India, up from 21 in 2007, according to Crime in India 2016 report by National Crime Records Bureau, IndiaSpend reported on December 12, 2017.

“It is interesting to point out that despite Kerala having a very high number of FIRs, in the matter of their disposal and conviction rate have performed well,” the report noted. “The reason for such high number of crimes reported has been explained by senior police officers of the state as arising out of awareness and social aggression; it cannot be denied that this is an indicator of high trust in the police as an institution.”

Nagaland and Goa were the best amongst small states while Delhi and Tripura were at the bottom in this list. These two states have been at the bottom across the three years of the PAI. Nagaland was the best performing as per the aggregated ranking of 30 states.

Delhi at the bottom on environment and transparency

Delhi, governed by the Aam Aadmi Party, is placed last in the list on two counts–environment, and transparency and accountability.

Air quality in Delhi is at ‘hazardous’ levels, with areas in the national capital registering an air quality index value–-a composite measure of ozone, nitrogen dioxide, sulphur dioxide and particulate pollution–-of 999 on June 13, 2018, according to the World Air Quality Index, IndiaSpend reported on June 18, 2018.

Globally, India fared poorly in terms of environmental health. It is now among the bottom five countries on the Environmental Performance Index 2018, plummeting 36 points from 141 in 2016, The Hindu reported on January 24, 2018.

Karnataka emerged as the best in the category among large states while Arunachal Pradesh was placed on top amongst small states. “The two states that stand out are Gujarat which has fallen seven ranks from last three years to 10 now; and Telangana which has improved its position from 17 last year to 7 this year,” the report noted.

Karnataka and Haryana were the top two states on the transparency scale. Kerala fell eight places to 11th among the large states in this respect between 2017 and 2018. But Telangana’s ranking improved seven spots to 4th during the same period.

(Paliath is an analyst with IndiaSpend.)

“The church is confronting injustice”: The archdiocese of Goa has called for anti-CAA rallies
Corporate games: can mining baron Anil Agarwal fry fish in its own oil?
RS returns Aadhaar bill to LS with Open amendments #UID
“Hacker X”—the American who built a pro-Trump fake news empire—unmasks himself