By Nihar Gokhale, Mumbai Mirror |
An uprooted tree.
State seeks urgent permissions to meet September 2019 deadline even as activists allege that the actual number is close to 90,000; NGT to take up the matter on July 10.

The Goa government has proposed cutting nearly 55,000 trees to construct the state’s controversial second international airport. The state moved an application before the National Green Tribunal (NGT) in New Delhi on July 3, seeking urgent hearing to permit the felling. The tribunal’s principal bench is expected to take up the matter on July 10.

This is the first time the state has revealed the total number of trees to be axed for the upcoming airport in Mopa, a village near the Maharashtra border in North Goa. In 2016, the state government selected GMR Group to build and operate the airport on a public-private partnership model and work began in September 2017. Activists allege that 55,000 trees is a misrepresentation – in reality, it’s 90,000.

“During land acquisition in 2007, the district administration had counted over 90,000 trees. These are small forests being cut without forest clearance,” said Abhijit Prabhudesai, general secretary of Federation of Rainbow Warriors (FRW), an environment NGO opposing the airport. The official number reduced after the state government, in 2016, narrowed the definition of a ‘tree’ under state laws, he said.

Acting on reports from villagers that trees were being cut without any permission, the NGT first stayed the felling in November 2017. On February 6, 2018, the forest department permitted felling of 21,700 trees, but this was stayed in March by the Bombay High Court’s Panaji bench as the trees had not been individually numbered. On the court’s directions, the state’s Principal Chief Conservator of Forests Ajai Saxena, in April, ordered numbering of the trees before cutting them.

In June, the HC directed the state to approach the NGT to approve the felling, leading to the recent revelation. Saxena did not respond to multiple calls and messages from this newspaper.

The number of trees has come as a surprise as the environment impact assessment (EIA) of the project prepared in 2014 had described the site as barren. The EIA has also been criticised for ignoring the presence of protected wildlife, including Goa’s state animal gaur, leopard, pangolin and giant squirrels at the site, which is a table-top plateau surrounded by dense forests.

In 2015, FRW had challenged the environment clearance before the NGT, where the case is being heard. During the hearings, the state received a clearance for 1,133 sq m of reserved forest area, in addition to the trees now coming under the axe.

Nearly 1,600 trees had already been felled before the February order was stayed. The state is desperate to ensure that the airport is ready by its September 2019 deadline. According to Goa chief minister Manohar Parrikar, the state –that had planned to finish the exercise before the monsoons set in – would face losses worth Rs 15 lakh per day if the deadline is missed.

“They know they cannot legally cut so many trees so they are doing it illegally. I have seen them cut trees and bury them. There is no law here only dadagiri with the help of the police,” said Sandip Kambli, a Mopa villager who has opposed the airport.

The government’s affidavits before various courts have claimed that the project is being personally monitored by Prime Minister Narendra Modi, who laid the foundation stone in November 2016.

The project was conceived in the 1990s to address the anticipated congestion at the current airport at Dabolim. Although it is centrally located, it comes under the Indian Navy; hence, its timings and further expansion are restricted. Mopa airport has faced a state-wide campaign criticising the need for a second airport, considering it would threaten the tourism business in South Goa and cause ecological damage. 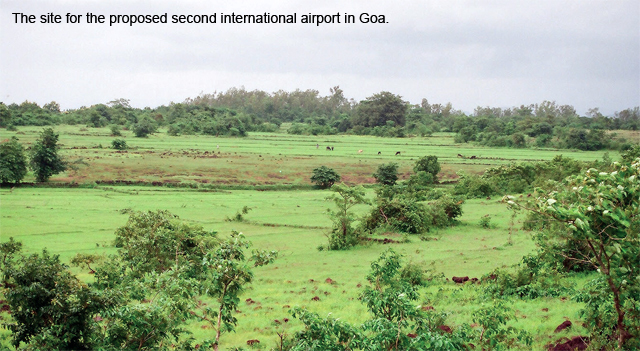 The Bombay High Court had stayed the felling of trees in March this year as they had not been individually numbered. In June, it asked the state to approach the NGT