India – 57 communal incidents per month in last 4 years, and 85% of these occurred in 8 states 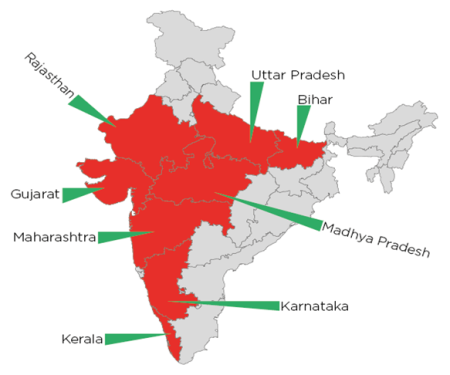 According to the Ministry of Home Affairs, a total of 2715 communal incidents occurred in the country from 2011 to 2014. This is an average of 57 incidents a month. Eight states Bihar, Gujarat, Karnataka, Kerala, Madhya Pradesh, Maharashtra, Rajasthan and Uttar Pradesh account for close to 85% of all the incidents. These states were ruled by various different parties and not a single party. Eight states did not report a single such incident in these four years. Seven of the Eight North Eastern states did not report a single communal incident.

The issue of communalism has attracted the center stage in Indian Politics for quite some time now. Fringe groups of all hues make statements to incite people and the result being small incidents lead to large communal disturbances. Data about communal incidents in the country provides very interesting insights into the spread of these incidents and the states where they mostly happen.

The Eight States are evenly spread across the country 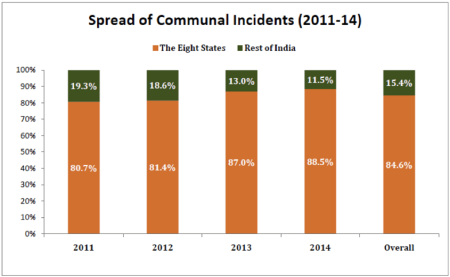 Of the 35 States/UTs of India, only eight (8) states accounted for close to 85% of all the communal incidents in the country. Bihar, Gujarat, Karnataka, Kerala, Madhya Pradesh, Maharashtra, Rajasthan & Uttar Pradesh are part of this group. It is also interesting to note that these states are from all the regions of country. Karnataka & Kerala are from the South, Gujarat & Maharashtra are from the West, Rajasthan & Uttar Pradesh from the North, Bihar from the East & Madhya Pradesh from Central India. What is interesting is that, these eight states were ruled by different parties during this period. The Congress, BJP, NCP, SP, BSP ruled these states at various points in time.

The trend within these states

What about the other states?

What are the Governments Doing?

Law & Order (including Police) is a state subject. Hence the responsibility of dealing with communal incidents rests primarily with the respective State Governments. The Central Government assists the State Governments in a variety of ways like sharing of intelligence, sending alert messages, sending Central Armed Police Forces, including the composite Rapid Action Force created specially to deal with communal situations. The Central Government has also circulated revised Guidelines to promote communal harmony to the States and Union Territories in 2008, which laid down standing operating procedures to be put in place to deal with situation arising out of the communal violence. The activities of all organizations having a bearing on communal harmony in the country are under constant watch of the law enforcement agencies and requisite legal action is taken, wherever necessary.

* Data/Information enthusiast & passionate about governance/policy issues, working on issues related to Right to Information (RTI) for a decade. Courtesy: https://factly.in/. Source:  Unstarred Question No. 2251 Answered on March 10, 2015 in the Lok Sabha, Ministry of Home Affairs.

India had 57 communal incidents per month in last four years, and 85 per cent of these occurred in eight states

Russia : Don't Go There. We Will Not Be Silenced
India - Implementing or Ignoring the Law on Sexual Harassment ? #Vaw
#India - The dishonesty in counting the poor
Delhi HC issues notice to Prasar Bharati CEO on AIR #sexualharassment case #Vaw