New Delhi/Mumbai: The rapes in Kathua and Unnao have triggered an intense debate on sexual violence, and the punishment that should be meted out to perpetrators. What seems to be largely missing from this debate is the gross under-reporting of such violence. One reason for this is the lack of accurate data on the extent of under-reporting.

Now, for the first time in a decade, the unit-level data of the National Family Health Survey (NFHS) conducted in 2015-16, and released earlier this year, allows us to calculate the trends in under-reporting of crimes by comparing data on actual experiences of crime victims with that of crimes recorded by the police, and compiled by the National Crime Records Bureau.

The NFHS is a nationally representative survey covering nearly 700,000 women. Detailed questions on sexual and physical violence were asked to a sub-sample of 79,729 women between 2015 and 2016. In the absence of a nation-wide crime victimization survey, the NFHS remains the most credible source on crimes against women.

Even if one excludes marital rape and assault from the analysis, the extent of reporting sexual violence is still small. Only about 15% of sexual violence committed by others (someone other than the current husband) is reported to the police. 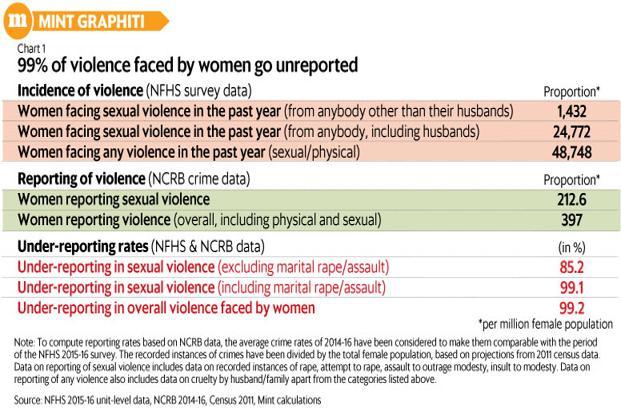 This suggests that the absence of a strong law against marital rape and assaults is not the only factor behind the low reporting. There are other factors at play, including low trust in the police and low conviction rates in such crimes that prevent women from reporting sexual assaults.

The picture is pretty similar if one compares the overall level of violence (sexual and physical) faced by women —as recorded in the NFHS survey data—versus what is recorded by the NCRB.

A state-wise analysis suggests that the extent of under-reporting tends to be higher on average in states with low female literacy. In states such as Bihar, Uttar Pradesh and Jharkhand, less than 0.5% of incidents of violence against women were reported. Tamil Nadu and Karnataka also saw very low reporting of such crimes despite a higher female literacy rate. 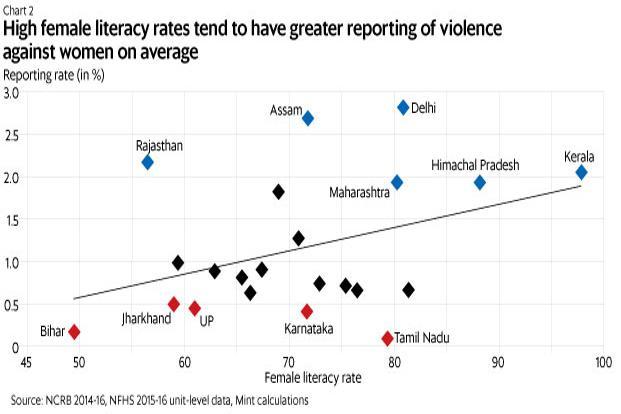 It is worth noting that the extent of actual under-reporting might be even higher because of two reasons. First, in our estimation of total violence against women, we have only considered violence committed against women aged 15 to 49 years, as provided in NFHS. Secondly, there is a possibility that the NFHS survey itself under-reports the extent of violence.

The estimated reporting rate is relatively higher for states such as Delhi, Assam, Rajasthan, Kerala, Maharashtra and Himachal Pradesh. Barring Rajasthan, all these states have relatively high female literacy rates. A 2014 research paper by economist Aashish Gupta, using data from the previous NFHS survey of 2005-06, found similar regional variations in under-reporting, although his methodology is slightly different from ours.

Despite these regional differences, the overall extent of reporting is still low in the best of states. The NFHS data provides further corroboration of this. Only 3.5% of victims of violence reported seeking the help of police. It is likely that among them, some failed to register a case even after seeking help.

The decline in actual instances of violence —as implied by survey data—has been accompanied by a rise in reporting, especially after the December 2012 gang rape in Delhi. 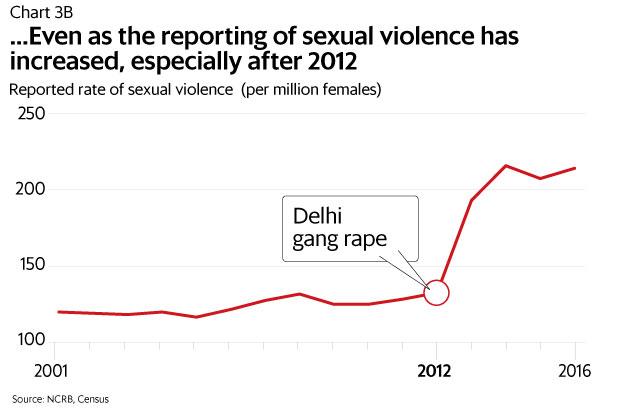 This suggests that the gap between actual instances of sexual violence and the reporting of such acts may be closing even if the pace at which the gap is narrowing remains slow. It is possible that the uproar over the Kathua and Unnao rapes will lead to a further spurt in reporting of such cases.