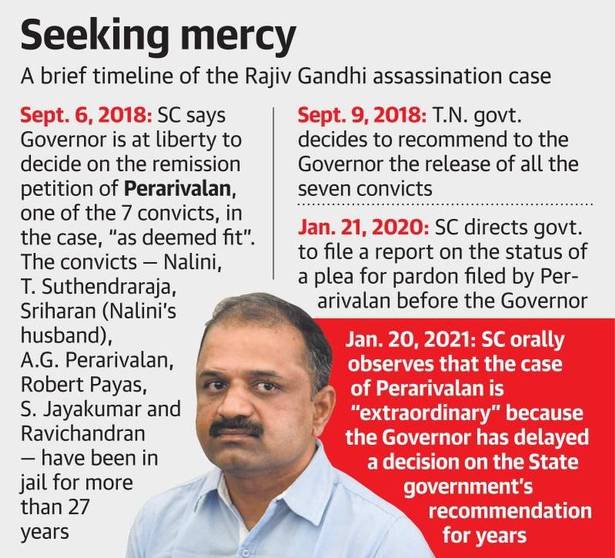 Perarivalan has been in prison for almost 30 years for his role in the assassination of Rajiv Gandhi during the 1991 election campaign. At the heart of the injustice being inflicted on Perarivalan is that government agencies have continued to insist on his incarceration despite being unsure of his role. It really is a classic case of state agencies being unable to identify and arrest those at the heart of the conspiracy while sacrificing the lives of those who might have had a peripheral role at worst.

The charges of the Central Bureau of Investigation (CBI) against Perarivalan for terrorist offences under the Terrorist and Disruptive Activities (Prevention) Act, or TADA, were upheld by the trial court along with the conspiracy to commit murder under the Indian Penal Code (IPC). Over the course of many rounds of litigation, his conviction only for the conspiracy to commit murder under the IPC has been sustained and he has served 30 years as part of his life imprisonment sentence (his death sentence was commuted in February 2014). But that procedural narration does not capture the profound injustice of Perarivalan’s incarceration.

At the core of his conviction is his confession to a police officer, a violent legacy of the TADA that was carried forward under the Prevention of Terrorism Act (POTA). While confessions to a police officer are inadmissible as evidence under the Indian Evidence Act (to protect people from coerced police confessions), terrorism legislations such as TADA and POTA made confessions to the police admissible as long as it was made to an officer not lower than the rank of Superintendent of Police.

The CBI’s main weapon against Perarivalan was his confession to V. Thiagarajan (SP, CBI) where he allegedly confessed to his role in procuring a car battery for the main conspirator and purchasing two 9-volt batteries that were used in making the bomb to assassinate Rajiv Gandhi. All of this was damning until Mr. Thiagarajan came out in November 2013 and made the startling revelation that he had not recorded Perarivalan’s ‘confession’ accurately.

In a sworn affidavit filed before the Supreme Court in December 2017, Mr. Thiagarajan stated that he had omitted to record Perarivalan’s statement that he did not know the purpose for which the battery was being procured. It was a glaring omission that completely changed the nature of Perarivalan’s involvement. In effect, Perarivalan was convicted based on a manipulated confession to a police officer.

It is incredible that despite the Supreme Court dropping the TADA charges, his confession which was admissible only due to provisions of the TADA was then used to convict him for IPC offences. Beyond the untenable legal basis of Perarivalan’s conviction, details of the broader investigation into Rajiv Gandhi’s assassination only exacerbates the injustice. Justice M.C. Jain’s Report (Jain Commission Inquiry) to Parliament in March 1998 identified massive gaps in the CBI’s investigation, including lack of clarity on the source and the making of the bomb.

To address these concerns, the CBI constituted the Multi-Disciplinary Monitoring Agency (MDMA) in December 1998 to conduct further investigations into the larger conspiracy and the origins of the human belt bomb used in the assassination. Over two decades, the MDMA has been submitting reports in sealed covers to the TADA Court and Perarivalan has been denied access to these. However, the MDMA has repeatedly stated that Perarivalan and the other accused are not part of these ongoing investigations. In essence, we have a situation where there is an acknowledgment at the highest levels that the origins and the making of the bomb remain unknown, and yet Perarivalan continues to be in prison for purchasing batteries whose use remains a mystery.

Despite all these indications of tenuous connections to the larger conspiracy, Perarivalan and his mother, Arputham, have been on a tireless crusade to end his incarceration. Having served 30 years of life imprisonment for the conspiracy to murder, his effort to get a remission under the Code Of Criminal Procedure was rejected by the Central Government in April 2018.

However, Perarivalan continued to be entitled to have his pardon considered by the Governor of Tamil Nadu under Article 161 of the Constitution. His application for a pardon had been pending with the Governor since December 2015 and under the Constitution, the Governor is bound by the aid and advice of the State government in the exercise of pardon powers.

Meanwhile, the central government employed obfuscation as a strategy to prolong Perarivalan’s incarceration. Having initially maintained that the issue of pardon was solely between the Governor and Perarivalan, the Centre took a constitutionally untenable argument before the Supreme Court in December 2020 that it was the President of India who had the power to consider Perarivalan’s pardon.

Then on January 21, the Centre submitted to the Supreme Court that the Governor would take a decision on Perarivalan’s pardon within a matter of days.

On February 4, the Centre informed the Court that the Governor had finally considered Perarivalan’s pardon and had decided that the President alone had the power to consider such an application. It is a shocking abdication of a constitutional duty and a blatantly unconstitutional manoeuvre to ignore the advice of the State government, which the Governor is constitutionally bound to follow.

Perarivalan was 19 years old when he was imprisoned, and 30 years later is still fighting for his freedom. In those 30 years, he has earned BCA and MCA degrees from the Indira Gandhi National Open University along with completing a whole host of certificate courses involving two wheeler mechanics, managerial skills, nutrition etc. In his book, An Appeal from the Death Row, Perarivalan says the MDMA will ultimately find that he had nothing to do with making the bomb. He then asks us, who can ever give him back his life. We must ask ourselves why Perarivalan continues to be incarcerated when we know that his confession was manipulated, that the government agencies themselves admit not knowing the origins of the bomb, and that Perarivalan is not part of the investigations on the bomb. Is it our fear that releasing Perarivalan would be a collective admission of our failure to successfully investigate the assassination of a former Prime Minister? It is cruel to ask Perarivalan to pay for our failures with his own life.

Anup Surendranath and Trisha Chandran are with Project 39A at National Law University, Delhi. The views expressed are personal

Home Ministry Cracks Down on Nearly 9,000 NGOs, Cancels Their Registration #WTFnews
Response of Lawyers Collective on the Suspension of Registration under the FCRA
UoH - A Narration of Police brutality #torture
Identity crisis on cards as crunch hits #Aadhaar #UID