#India – #Aadhaar is Niradhaar , #UID is not unique – Supreme court puts its Stamp 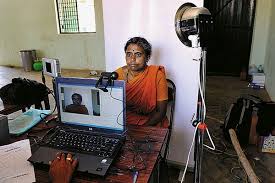 The Supreme Court order on Monday ruling out the Aadhaar card as mandatory for availing various government services has not come a day too soon. For, the way the scheme was conceived and implemented, it had left a lot to be desired. Vast amounts of taxpayer money were wasted on a scheme whose usefulness is still in question. Basically, providing all comers a unique identity number, or Aadhaar card, without in anyway verifying fundamental details, such as the person’s nationality, address, name, etc., was bound to prove problematic. Besides, the scheme lacked parliamentary approval, the government rushing to spend thousands of crores on a mere executive order.
This could have been condoned if such a major expenditure was undertaken on a scheme which promised larger benefits to the society. That they still went ahead with Nandan Nilekani’s pet idea, even though the then Union Home Minister P Chidambaram had very serious reservations, reveals the confusion in the higher echelons of the government. Chidambaram had blocked the roll-off of Aadhaar on the very sound ground that the home ministry’s National Population Register aimed to achieve virtually the same objectives. The public scrap between Nilekani and Chidambaram had threatened to jeopardise Aadhaar even before its roll-out. But the prime minister intervened to effect a compromise. While Aadhaar was assigned major urban centres, the NPR was allocated the rest of the country. There was no doubt that the Aadhaar roll-out owed more to the fact that Nilekani had left his high perch at the IT major Infosys to implement the Aadhaar scheme, and no dispassionate analysis of its costs and benefits. Equally, the government seemed in a hurry to garner glory by investing the Aadhaar scheme with a host of yet-to-be-verified benefits. The provision of various benefits and services like subsidised gas cylinders, motor registration, scholarships, provident fund, salaries, etc. was crucially sought to be linked to Aadhaar cards. Further, in the name of financial inclusion, banks were ordered to open accounts on the basis of Aadhaar cards and do away with the mandatory `know-your-customer’ norms. Public sector banks were in a funk, but felt obliged to follow the orders since the government was deadest on exploiting the scheme for electoral purposes. The Direct Benefit Transfer scheme received a huge PR build-up before roll-out. Otherwise knowledgeable ministers like Chidambaram called the DBT a `game-changer’, little realising that the foundation it was based on, namely, the Aadhaar card, was shaky. It was sheer wastage of taxpayer funds that the Aadhaar and NPR schemes were duplicated in large parts of the country, including the national capital. The shoddiness of the government was not limited to the misuse of Aadhaar cards by illegal immigrants for acquiring even voter cards or to draw all the benefits available to bona fide Indian citizens. Even the privacy concerns of citizens were not addressed when the scheme was rolled-out on an executive order, without due parliamentary approval. Bestowing primacy to Aadhaar cards for the provision of various services, as if that in itself would plug leaks of government funds and improve their implementation was one thing; even those tasks which did not require these cards were brought into its ambit. For instance, in Maharashtra, the Aadhaar card was made necessary for marriage registration.
In its order on a PIL, Justices B S Chauhan and S A Bobde, while granting an interim stay on the use of Aadhaar numbers for various government services, remitted the matter to a Constitution Bench. In a brief order, the court directed the Unique Authority of India to “verify whether the applicant is entitled to the card under the law and should not issue it to illegal immigrants.” How the authority will do it is unclear, since it lacks the wherewithal to undertake such background checks of applicants. The Aadhaar cards would lack credibility even for bona fide Indian citizens, unless there was some guarantee that the details mentioned had been cross-checked by an official agency. Or, at least, the detection of false details by applicants was made punishable under the law. Without a ring of credibility, its utility as an identity number of a bona fide Indian citizen would remain suspect. Since thousands of crores of public money have been wasted, maybe a via media can be found to salvage the well-intentioned but hastily implemented scheme.

Why Are India’s Young Doctors Refusing To Serve in its Villages?
#India-'Don't lock us up, make city safer' #Vaw
India -Is the proposed nuclear plant in AP a cover for massive land acquisition?
Front Line Defenders demand release of anti-Adani adivasi woman campaigner