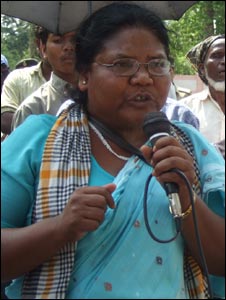 Activists and supporters of Dayamani Barla, award-winning adivasi activist and journalist who was given bail but arrested soon after in a second case on October 19 in Ranchi, have prepared to intensify their demand for her release.

They will move court for her bail on November 29. The Adivasi Moolvasi Astitva Raksha Manchi (AMARM) has announced a protest in front of Raj Bhawan the same day.

“The government’s intention is clear. They want to intimidate Dayamani and break the movement of the Nagri villagers who are demanding the government build elite college campuses on non-agricultural land, instead of displacing them” said Father Stan Swamy, a Ranchi-based social activist.

The Chief Judicial Magistrate’s court in Ranchi first sent a property warrant against Ms. Barla on September 23 this year in a 2006 case registered against her for leading a protest march demanding that villagers be given MNREGA job cards or given unemployment allowance in villages in Angada block in Ranchi district. At this time, Ms. Barla had led a successful protest against setting up of Arcelor Mittal’s steel plant over 11,000 acres of land in Gumla and Khunti citing Chotanagpur Tenancy Act which prohibits sale of tribal land to non-tribals.

“Two days after Dayamani surrendered before the Magistrate’s court in the 2006 case which the government raked up after six years, she was given bail only on the condition that a blood relation will have to be present. This is not often done and shows the government is trying to make things difficult for Dayamani,” said Faisal Anurag, a Ranchi-based independent journalist. “When we went to the jail to receive her, the jail superintendent said a second warrant has been issued against her in an August 15 case for obstructing government work citing the incident when she led Nagri villagers to plough land on which government had built boundary walls,” he said.

Since 2010, Ms. Barla has led a movement against Jharkhand government acquiring 227 acres of paddy farmers’ land in Nagri village, 15 kms from Ranchi, for the campuses of Indian Institute of Management, Indian Institute of Information Technology and the National University of Study & Research in Law (NUSRL). The government claims it acquired the land from them in 1957-58 to build an extension to Birsa Agricultural University. However, Right to Information (RTI) applications filed by Ms. Barla revealed that of the 153 families to whom the government had offered a total compensation in 1957, only 25 families in Nagri took it and the rest had refused.

Speaking to The Hindu on October 1, Ms. Barla has challenged the Jharkhand government’s acquisition of this land using clause 17 (4) of the Land Acquisition Act, which is for situations of urgency such as building a railway line or an airport.

Mr Anurag said Ms. Barla was a diabetes patient and had made requests to be provided meals accordingly but the jail authorities had not cooperated.